Last time, I told you about that thing...LUnix. Well now, that was, indeed, a fairytale, but know what: I found my geos disk for my old c64 and here's the daddy of all OS-es.
geOS 2.0 comes on just one disk (not fully occupied) and is rated by many as one of the most incredible achievements of IT. And, indeed, it is something wonderful.
geOS 2.0 was taken out in 1988, and blew the c64 on the sky with its gui. Few (if none) OS-es had achieved that; those were still the early days of ms-dos, and to be sincere, I'd still use geOS instead of DOS.
Let's take the things, one by one. The first thing that amazes you is the fact that the c64 can actually do more than the usual games. In fact, the gui is a masterpiece, as the display space of a cbm was quite narrow. There are a few menus you need on the upper part of the screen. The middle part of it is taken by the list of the files from the disk currently inserted. The rest of the screen is used by the icons.
geOS comes with a wide range of supported printers. How well are they supported - I can't tell for sure, but I remember that I could print on my Oki 120 NLQ printer when it was still working. It also supports the classis commodore mice, and more drivers can be downloaded from the internet. The software it supports is infinite - you can run all the programs you were using before as it gets you back to the BASIC environment when you execute such a program, and then quietly gets back up after you finish.
Speaking of the Internet, there are two things I actually need to say. In fact, I don't know about the first one - I am not sure if you can surf the net from geOS. Again, I remember you can - but my memory is not exactly up-to-date. The second thing is sure: the Internet is full of software for geOS. You can actually do whatever you want with it. Programming - there's a version of C++ and numberless assemblers. Graphics - a lot of things. The multimedia cappabilities are very good.
These are the good things. The bad things follow: first of all, the copy protection, which is quite annoying. These days it's not much of a problem as you can fool it with a pc, but...em...it's not exactly legal:). In fact, geOS 2.0 for C64 is, from my knowledge, NOT abandonware (as is the PC version which I found on www.the-underdogs.org). Therefore: if you can obtain from the Internet, it's WAREZ! and not quite advisable to use it. I myself had a lot of problems with this, I was in doubt if I should have a backup copy in case the disk would get broken. It's still a wonder it works after all these years...I mean, darn, it's 14 years old, as old as me!!!
How slow is this thing, you might ask. Well, here we go: not VERY slow. In fact, it's faster than LUnix, but slower than Contiki (of course, Contiki is newer and not exactly as complex). It's quite fast and generaly usable. The only thing that takes a longer time to complete is the boot process, but still it's booting up much more quickly than Windows:).
Then, how good it is? If you have a non-warez copy it's excellent. While not exactly of much use now, it's still advisable that you get it; at least for the history part of it.


(geOS for Commodore64 is still commercial. It can be bought from http://cmdrkey.com/) 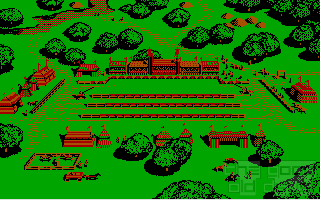