It's something really funny about the music on the C64. Let's face it: it kindda sucks. I can't remember the thing's speakers doing anything interesting, aside from hurting my ears maybe.

Even so, everyone seems to like it. The reasons are totally beyond my understanding, to be sincere. At the time, it was, of course, something great, but today the sound is simply lame, especially after passing through the Amiga.

Kawasaki is also pretty much of a Party Software (just like Blood 2 if I come to think...:D). No, it has nothing to do with the motorbike, it's actually a program which enables you to hurt other people's ears creatively. Or, well, "sing" if we are to trust the common sense.

First of all, let's make one thing clear: Kawasaki Synthesizer is *not* a composer (tracker as they call it...meh). Composing music for a C64 was simply something heroic. I've been playing drums for three years, and piano for almost as much, but I couldn't make a darn harmony with a tracker

), I work with notes, not numbers. Oh well. Kawasaki is interactive, that is, it allows you to play using the keyboard.

For its year of release (1983) it is quite feature-packed. Kawasaki comes with a good number of preset sounds, ranging from Piano and Flute to Funky Bass. Of course, you shouldn't expect them to sound like if they were what it says - the Piano sounds nothing like a piano, the Flute sounds like a ventilator and the Funky Bass...well, it acts like a bass, but I doubt anything sounding like that would be used in reality.

Kawasaki allows you to use vibrato, bend and sweep effects. The vibrato and bend sound very well, the sweep doesn't

. Well, this is *very* subjective, actually the sweep isn't that bad on some instruments.

What rates Kawasaki as a party software is the play along mode. What it does is that, when you press "B", a drum&bass background "emerges", and you play along with the rhythm. It's quite addictive, and makes for a good contest actually

Unfortunately, even this mode is let down by something, and that is the fact that the rhythm is not only scarce (and there's just one preset), but it's also kindda indecided about what type of music you can play. It's not Jazz, nor Blues, you can't play Rock on it, it's too complex to be Pop...hmmmm...it's actually something Funk, but not too good.

A few more words about this should go about the tunes that come with Kawasaki. Again, even though they're for my ears what a dentist is for my nerves, the tunes just sound nice

. Though I sense a slight form of cheating, in the way that they're polyphonic, while if you try to play, you'll miserably fail to make more than one note at a time come out of your CBM.

) graphics would look better on an Altair

. OK, so I'm exagerating, graphics aren't really that bad, but a C64 can surely do more.

Overall, Kawasaki Synthesizer is a pretty good piece of software, but let down by the fact that it's quite unpolished and not quite decided into what it is (synthesizer? player? demo? hmmm...) 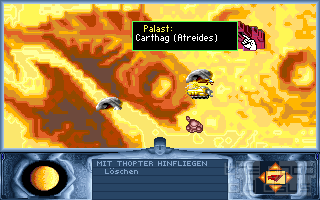