Many players consider it one of the deadly sins of game design, yet death has got a long history in the Adventure genre. In the early days, it was even considered a normal feature. How did it go from being an integral part of the genre to a generally undesirable element? Why is it used in so many games anyway? Are there alternatives?

Quote:
It's pitch black. You are likely to be eaten by a grue.

Zork had the decency to warn the player about the grue danger. It wasn't kidding - this strange monster roamed the caverns of the Great Underground Empire killing off unsuspecting adventurers mercilessly and... randomly. In the darkness, there was little the player could do to avoid becoming grue food. However, it only ever struck in the dark, so turning on the brass lantern he carried scared it off. What was more dangerous were the randomised fights with various other monsters and the infamous thief who kept appearing randomly. This thrill was part of the whole game experience. After all, doesn't it make sense that the exploration of an underground cave system would be a dangerous affair? 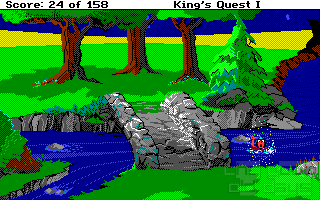 Drowning - again
This tradition was carried over into the world of Graphic Adventures. King's Quest: Quest for the Crown laid the foundations of Sierra's dominance in this subgenre for most of the 1980s. Death Quest would have been a perfectly appropriate title, too. Dozens of colourful ways to die awaited the player: falling into a moat, from a tree, drowning in a well or being incinerated by a dragon were just some of the first ones. 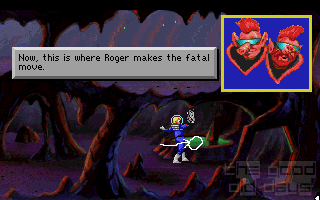 Mocking the player's failure
Space Quest took this concept to new heights: The series used the player's death for comic effect. This idea of celebrating failure slowly got more and more important as the series progressed. On its height, it was explicitely played for laughs in the 1991 remake of the first part where the game would 'cut' to the two designers' avatars mocking the player's actions leading to his death in the style of sports commentators. While this sometimes proved to be funny for the player indeed, it also increased the trend to put more and more death scenes into the game on purpose even more. So while taking death humourously might have been conceived as an advantage at first, this was quickly balanced back to the negative side by the increase frequency. 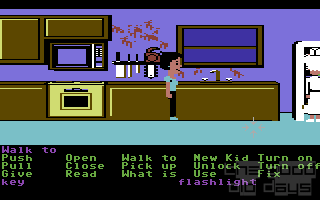 At least the chainsaw won't kill you
The 'other' large US-American company, Lucasfilm Games, wasn't quite as merciless. However, even they offered their fair share of death scenes - especially in their early days. In Maniac Mansion, the player can, among other things, cause a nuclear meltdown (killing all characters at once) or be killed by a cruel character called Weird Ed. It wasn't quite as common as in Sierra's games, though. For example, to trigger the latter action, the player would first have to put Ed's hamster in the microwave, switch it on, take the remains and show them to Ed - none of which was required to solve the game. 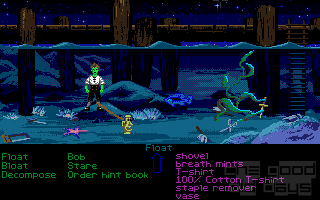 The custom verbs are a nice touch
Even The Secret of Monkey Island, the first game made by designer Ron Gilbert after he wrote his influential essay about fair Adventure games, still had one scene in which the player could actually let the protagonist die. Even Guybrush could only hold his breath for 10 minutes... 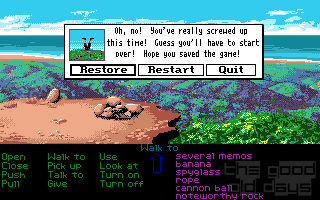 Oh, no!
Monkey Island is also noteworthy for making fun of the Sierra way of mocking the player's death. On Monkey Island, Guybrush can fall off a cliff - in true Sierra tradition, this happens without warning, just by moving around. A mock dialogue box modelled in the style of Sierra informs the player he has died - only for Guybrush to appear on top of the cliff again saying he bumped off a rubber tree and survived after all.

Even Lucasfilm couldn't revolutionise the genre so much as to abolish the looming threat of death, however. It remain a factor to be considered to this very day.

This brings us to the all-important question: When is it alright to kill the player off? Is it ever? If so, under what circumstances? A question which is not as simple to answer as it might seem at first. If it were, it wouldn't be such a controversial topic. There are several aspects to consider to judge whether dying could be considered 'fair' or not.

Wile E. Coyote can get smashed by rocks and blown up by his own traps as many times as he wants to - he will always be back alive and well. Nobody ever dies in cartoons. Putting the question raised by concerned parents whether this actually has a negative effect on children by trivialising violence aside (this is not the subject of this article): This can be easily transfered to games. Cartoon violence never needs to be fatal for it to achieve its comic effect. 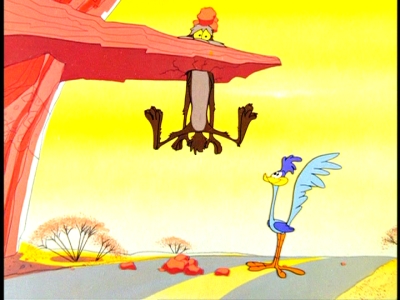 On the other hand, what about a game with a more serious topic? One about exploring a dangerous cave, for example? What would that be without the actual danger of a cave-in? If the player knew this could never happen, this could prove fatal for the desired immersion. Or what about games like Police Quest? If you're confronting a murderer, how thrilling would the scene be if he just waited inactively for you to solve some puzzle which enables you to book him? Certainly, such a person would defend himself. 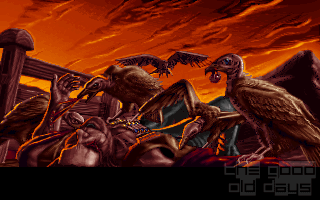 In Silverload, the player can die just from going to a remote, but unsuspicious house.
Countless games, especially in the early days, simply killed the player off in completely unpredictable ways. You could die just by entering a room... or by not entering a room (i.e. standing still too long). The problem with this is, of course, that this is a huge frustration factor simply because there is no way to foresee such issues. It's just trial & error, learning by death or whatever you want to call it. This is exactly what Monkey Island made fun of in its rubber tree scene mentioned earlier.

Some games, however, communicate dangers quite clearly. Not just on an abstract, general level ('You are likely to be eaten by a grue'), but the player knows when he's about to do something which could be dangerous in a specific scene. Imagine trying to blow up something with dynamite. It should be obvious that after lighting the fuse, you will be in mortal danger so you better get rid of the stick as quickly as possible. Careful players might opt to save their game before committing such an action.

Which gets us directly to yet another issue... 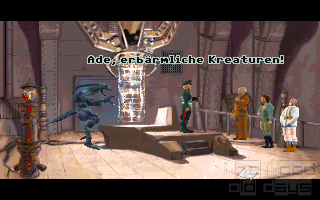 Neither the nazi, nor the monster poses a real threat
How does the game deal with the player dying? The classic approach was: tough luck, pray you have saved your game recently. Over time, an instant undo function crept in, allowing the player to reverse the last action which lead to his death. One specific implementation of such an undo concept can be found in Prisoner of Ice, for example: Whenever the player enters a scene in which he could die, the game saves itself automatically.

This, of course, is a two-faced solution to the problem. It is very convenient for the player and avoids the obvious frustration factor involved in being forced to replay parts of a game. However, how does this affect the feeling of danger which, as discussed earlier, can sometimes be necessary in certain games? How threatening does such a 'prisoner' feel: He can swallow you in one gulp if he reaches you, but you can sit back and smile, knowing that with one press of a button, you'll be alive again, ready to try again. Aren't we entering the cartoon space again there? Is an undo option just a cop-out?

So whatever you might think of dying in Adventure games - we all have to admit that it is part of the genre. Not just because of lazy or unimaginative developers, even - although this might have been one of the primary driving factors in the development of many games. There are valid reasons to include death scenes.

Similarly, there are good and bad ways to cope with this. This is where things get really complicated. How much of the potential impact (meaning frustration) can and should the game take away from the player? There are ways to soften the blow, some of which have been named, but, as it has hopefully become clear, taking too much responsibility away from the player could be considered harmful to the overall perception of the game, too.

Does this mean there should only be cartoon-ish games without any deaths from now on in order to avoid these tough decisions completely? I simply hope nobody ever comes up with this as a serious suggestion. What I hope, and what is every player's right to expect is that the designers put a lot of thought into these matters - because nobody will start a game from the scratch again after being killed halfway through by some car which randomly appeared while the protagonist was crossing the street (Gold Rush!...).

Image Gallery: You have died! Restore or restart?