Did it ever occur to you that the companies which make modern-day handheld gaming devices don't actually live off the price of the hardware, but that they make their major profits from their share of software (game) sales? So believe it or not: Sony, Nintendo & Co. have a direct interest in upholding that myth that new games are, by definition, better than old ones. Oh sure, the situation might get slightly better; there are now compilations of classic games for these systems, but...

a) ...you're supposed to pay for these games which you might already own again and again.

b) ...you depend fully on the selection some company makes for you.

The freedom to simply run whatever games you want is definitely not covered by the price tag. And as so-called smartphones slowly begin to take over this portion of the market anyway, things get even worse: Apple won't even allow you to run a simple emulator on your/their phone as that would violate their policies against loading software within software!

If you look further than your local consumer electronics store, there are alternatives, though. One of these OpenPandora. It was apparently born out of frustration with things like the ones described above and... well, let's be honest: The incessant urge of engineers and IT people to build stuff. Believe it or not, our generation (meaning people who played all these games we're talking about on this site when they were new) has grown up and is now able to pull something like this off. 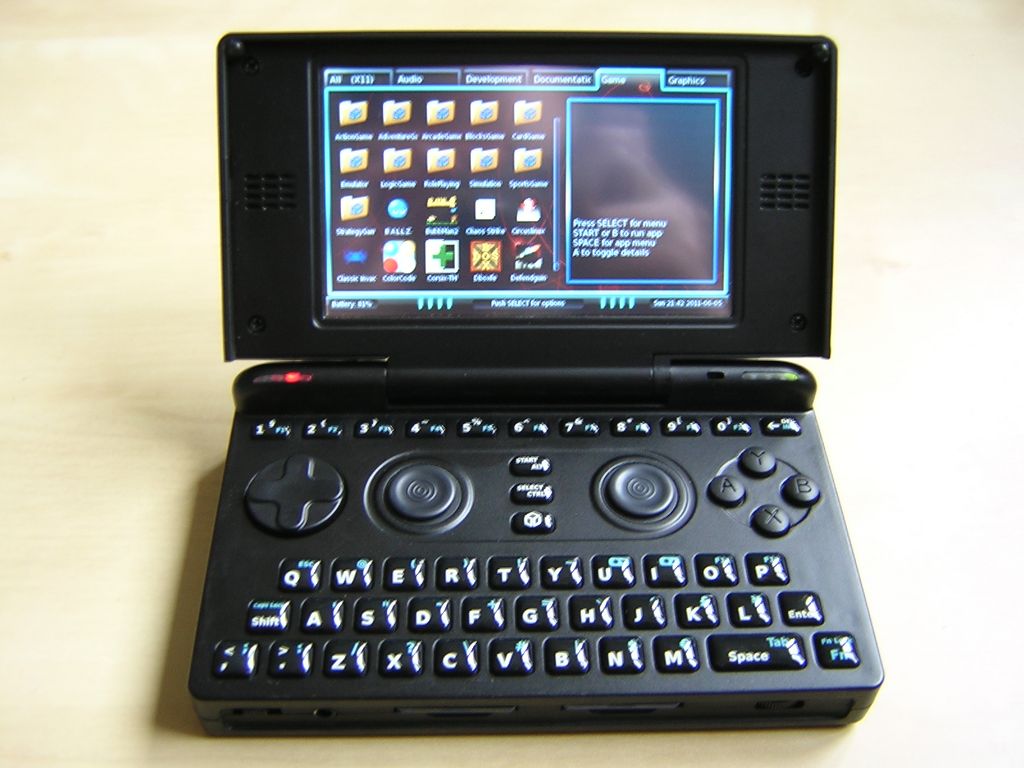 The 'simple' GUI
So, what does this mysterious Pandora offer? Above all, it is important to understand that while this device has been made 'by gamers for gamers', it is not just a locked down console which plays games of a certain format and that's it. It is a fully fledged mini computer which is only slightly larger than a Nintendo DS - so it will even fit in your pocket (where it will look bulky, but aesthetics aside, it will fit). In spite of its size, it has a keyboard as well as the common gaming controls (Joypad-like controls with six buttons as well as two analogue 'nubs') and a touchscreen.

Software-wise, you can have a full regular 'desktop environment' by default, including the applications usually found on a computer which can be run in parallel. If you just want to play games, however, you can also use a simple alternative menu which just lists the installed applications/games and lets you launch one. In theory, if you like tinkering, you can even install a completely custom operating system - without 'jailbreaking' via some shady Russian server or anything similar. 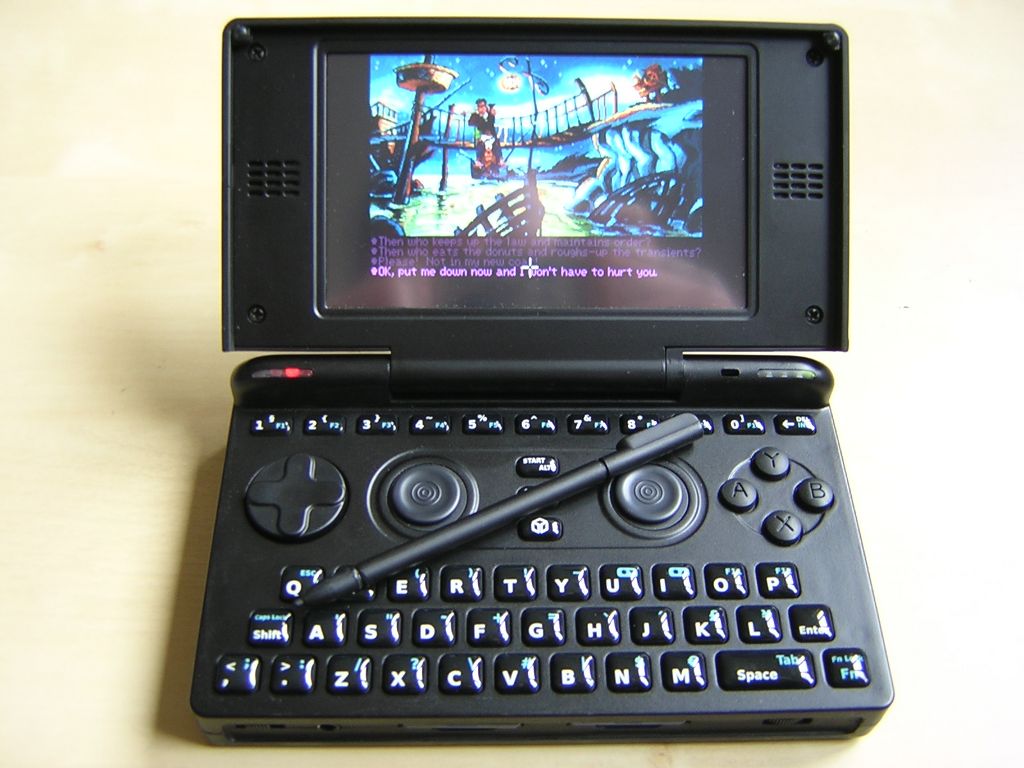 Running Monkey Island 2
Putting many of these amazing capabilities aside, though, and concentrating on the gaming part, you will be able to play most of the games found on this site (and many more, of course). Emulators for pretty much any classic system exist, whether it's Dosbox (for a round of 3D Cyberpuck), UAE (to quickly play North & South), NES (for some Donkey Kong or Zelda) or Stella (to relax while fishing). You will also find the usual interpreters: ScummVM lets you play all those old Lucasfilm games starting with Maniac Mansion as well as many others like Broken Sword, Frotz runs anything from Zork to Anchorhead. The latter games should also make the advantage of having a physical keyboard all the more obvious: Try playing these with a touchscreen keyboard. Awkward.

Apart from the classics themselves, there is also a nice number of ported freeware games, many of which are remakes or spin-offs of classics. You will find all the usual suspects like SuperTux (an excellent Super Mario imitation), a faithful Paradroid remake, Sopwith or even OpenTTD, a greatly enhanced Transport Tycoon remake. 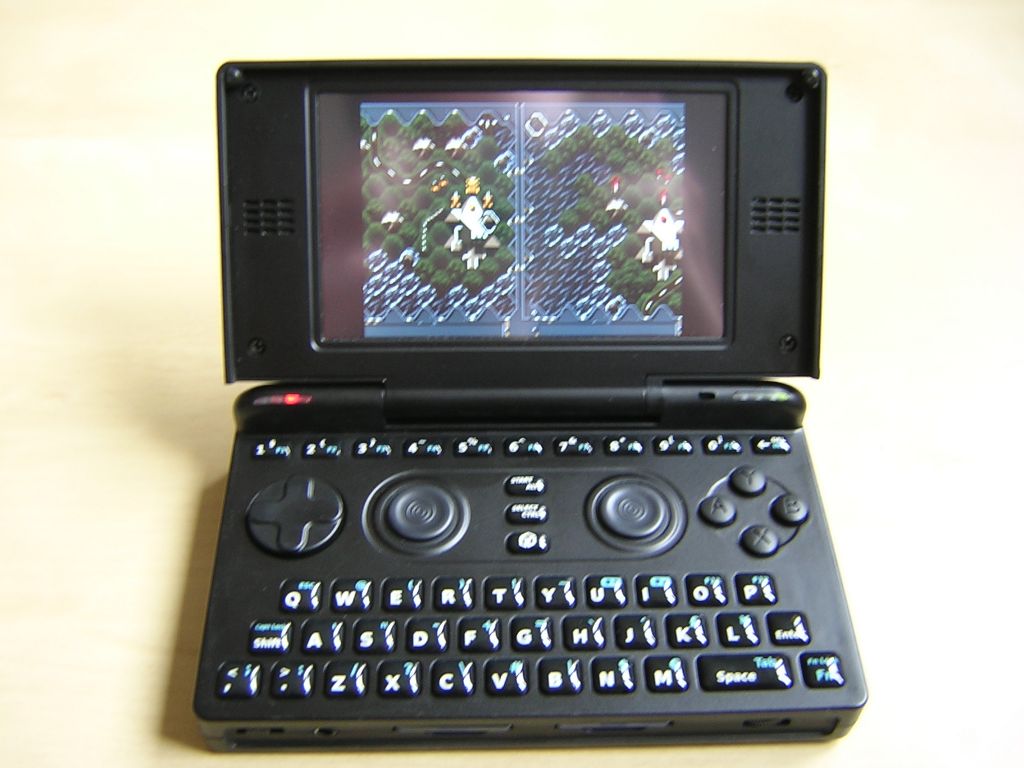 Battle Isle, thanks to its joystick controls, works well
The latter shows one of the limits of the Pandora, of course. Although the game technically runs, there is not much fun in playing this game without a proper mouse. The same effect strikes Theme Hospital (which can be played natively as well): It's nice to see the game appearing on the screen, but it is not seriously playable.

This shows the one big hardware design issue of the Pandora: Mouse emulation with these analogue nubs is pitiful and using the touchscreen/stylus, while it is very practical for typical desktop applications, is virtually useless to anything which involves mouse movement. They really should have included an IBM nipple for maximum convenience with all forms of input. Strategy games are not ruled out in general, though. Anything which doesn't require difficult operations with the mouse (e.g. holding a button while turning it), like Civilization, will work OK. 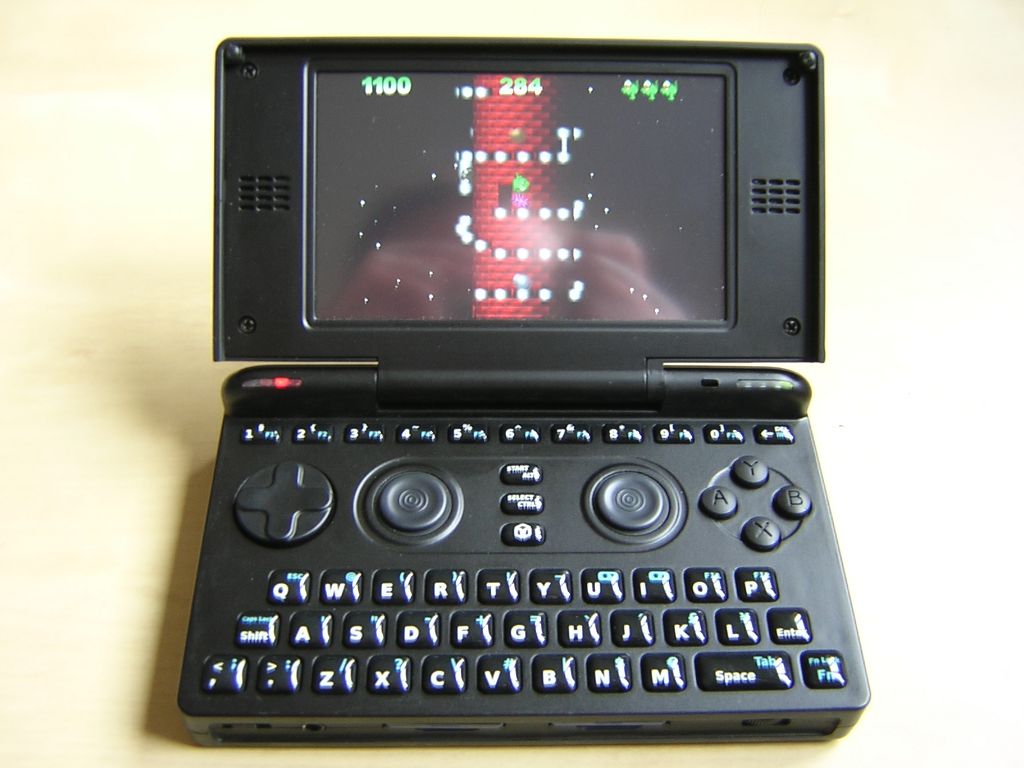 A remake of Nebulus
Of course, if you consider buying a Pandora, you have to be aware that (once again) there is no big company backing this system. Although two companies have been founded to produce and market the device these are basically one-person endeavours. There is no big money behind it, no established distribution channels and certainly no development of new commercial games by established software companies. If modern-day games are a must, this is not the right system for you.

Likewise, if you absolutely need the ability to go to your local retail store to get support when you've broken your handheld once again, you will not get happy with the Pandora. If you need support, there are public forums, IRC, a wiki or e-mail, but don't expect the system to reach the critical mass that you can expect your neighbour to be able to fix your problem. 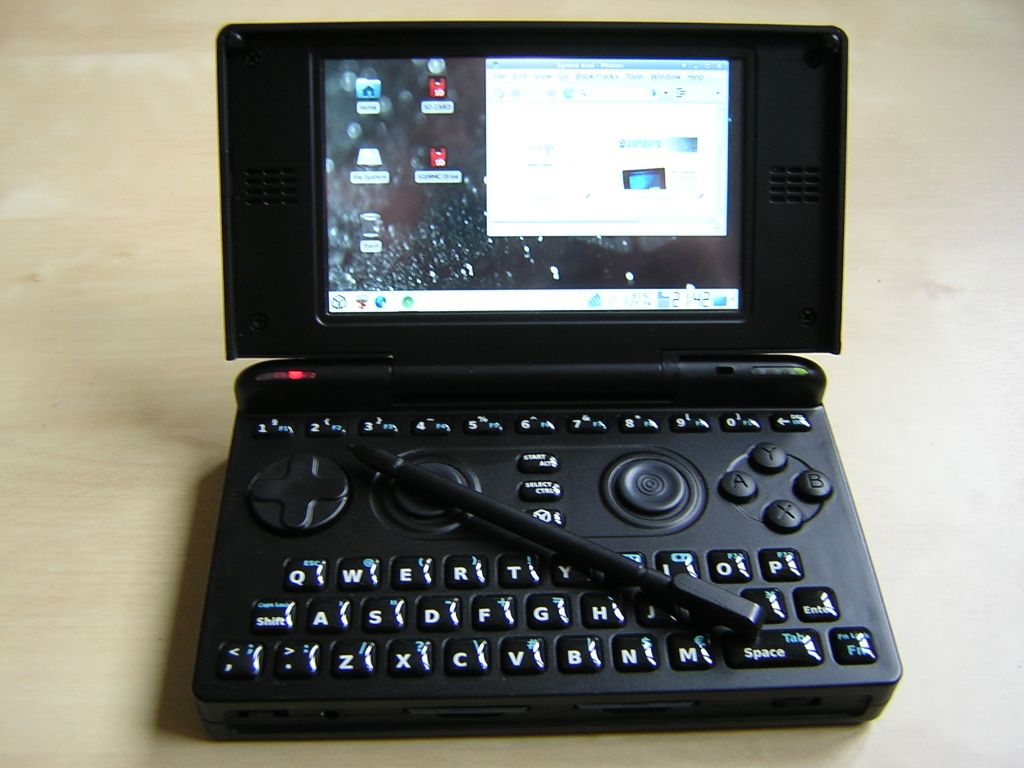 The 'desktop' GUI
If none of this is an issue for you, however, you can't really get anything better than the Pandora. If the price tag strikes you as high, remember that this article only scratched the surface of the non-gaming related possibilities. Also keep in mind that, again, you won't need to re-buy the games you already own: After paying for the device (and an SD card for mass storage), there are no followup costs.

Personally, I now take it with me in most situations I would have carried a full laptop otherwise. I can read & send e-mail, visit websites, connect to my home network, administrate websites, make notes, even write code - and on the train, I can read, listen to music, watch movies or play one of my favourite games. I won't write a novel on this small keyboard, but it's certainly capable enough for most tasks. Apart from its convenient size, it even has got one more advantage over a regular laptop: Its battery lasts about 10 hours. That is if you're using it regularly - if you turn off the screen and just listen to music, it will last a lot longer even.

The Pandora uses technology to empower you, give you more options, more freedom of what you can do. With these locked down mainstream handhelds or phones, it is the opposite: Technology is used to restrict you. This difference cannot be applauded enough.