The Secret of Time Travel

In fiction, time travel is a very popular motif, because it opens up many storytelling possibilities. However, not all time travel stories are actually about time travel and its mechanics.

Using Time Travel as a Convenient Excuse for an Adventure Story

In most classic science fiction, time travel only serves as the initial explanation of an adventure story. Buck Rogers is a good example of this concept: A 20th century pilot is accidentally frozen, wakes up 500 years later and now gets tangled up in this new world of space travel. An original concept in the area of computer games which follows the same principle is Space-Pilot. Here, the player is a pilot in a time-travelling aircraft. I.e. to make the levels more varied, each of them represents a different historial or futuristic era. 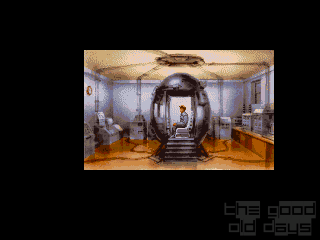 An egg-shaped time machine
When it comes to storytelling games, Universe uses the old time travel excuse. A teenager uses his uncle's invention to travel into a futuristic universe. Here, he has to...

b) ...find his way around this alien world with all its new technology.

Unfortunately, the gameplay of this game is not much more original than this basic plot device. In this respect, Victor Loomes is a little better: This promotial game features a 1930s gumshoe who tries to help a nightclub singler... by investing her money in 1990s Germany after travelling in H.G. Wells' time machine. Not bad for a free promotial game, even if the plot makes no sense at all.

It gets more interesting when time travel is not just used as plot ignition, but it becomes the central aspect of the game mechanics. All the typical sub-types of the time travel genre can be found in the games world, too.

One sub-genre involves bad guys 'corrupting' the timeline by travelling into the past, changing it and thereby changing the present (the future from the perspective of the era in which the changes occured). The protagonist, on the other hand, is usually a kind of temporal cop tasked to reverse these changes again in order to restore the original timeline. Ilyad is about exactly this: Somebody has placed futuristic spaceships in different historic eras, the player jumps into his own ship to blast them out of the skies. 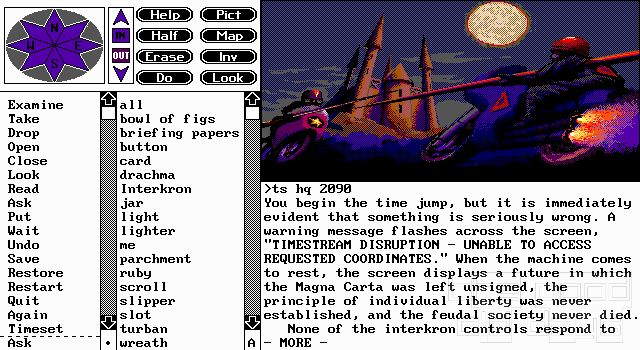 Timequest is a much more intricate version of the same idea: The villain has placed subtle modifications into countless historical eras, all of which have to be corrected. If the player fails in this mission, the game ends in an alternate timeline, most of which are very grim. However, Timequest is not just about time travel; it also uses its mechanics for its puzzles. You need a particular object, but you cannot find it? Maybe it will be readily available in another time and at another place. Bear in mind, though, that everything you do in those time periods yourself might also change history. 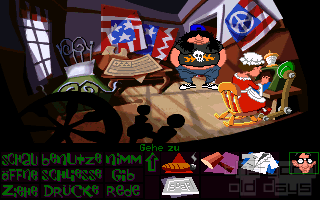 The original American flag is being designed – what if you brought in your own draft?
This ability of the time-travelling protagonist to change history can also be used as an element of positive gameplay mechanics. Day of the Tentacle builds on this idea very much: Each of the three protagonists has been dislocated to a different time, the humans of the future being rules by tyrannical tentacles. How can this future be prevented? Apparantely, this involves cutting down trees in the past, putting a hamster into a freezer and washing a sweater for 200 years. Amazing puzzles originate organically from the premise – if you buy it.

Discworld uses mechanics much like Day of the Tentacle to a lesser degree. In some cases, the puzzles become quite illogical and in-joky: How would you know that the butterfly effect (the flapping wings of a butterfly causing a storm) plays a role in the game if there is no hint towards releasing a butterfly 'last night' might help the situation 'today'? Gameplay logic aside, this is nevertheless a good example of time travel logics being successfully applied in a game.

Usually, time travel stories involving changes to a timeline are starting out in the present, but then someone has to go back into the past to change things. Kampf um Trubelland has the opposite premise: A girl from the future asks the present protagonist for help through a inter-time-communication device. So to change that dark future, the player has to take action in the present. Unfortunately, the game is one of the worst in computer game history.

The lamest time travel aspect of any game can be found in The Dig, though. Various people have died, the mission and the whole world is basically doomed – go back into the past by a few hours and everything will be alright again. Time travel is a means to achieve a cheesy ending, nothing more. 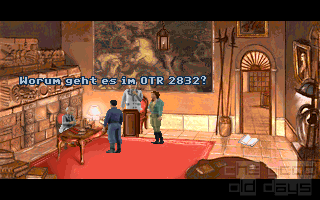 A second version of your alter ego will appear at any moment and save you
Time travel is not always a such a clean and simple affair. Prisoner of Ice shows one of the paradoxes of circular logic which simply cannot be unravelled once you start thinking about time travel. In one particular scene, the protagonist is threatened with a gun – seems like there is no way out. Out of the blue, another incarnation of the protagonist appears, shoots the bad guy with a futuristic raygun and disappears again.

Strange, but later, the player finds himself in the same situation again, just from the perspective of the other incarnation of the protagonist, i.e. saving his own earlier version. The logical problem: If the protagonist had been shot in this scene, he would not have been alive later to travel back in time to save himself. So where did he come from? The existence of the later ('saviour') version depends on its own actions.

The bootstrap paradox is another one of the typical time travel paradoxes. It is concerned with the origin of the existence of objects: The action of items being carried through time and maybe being passed on there can cause paradoxical causal loops. The main objective in Snackzone is to retrieve a lost/stolen food recipe. This involves time travel, but ironically, the player does not go back in time (before the recipe being stolen), but into the future where the recipe is available in a museum. Finally, he grabs it there and takes it back in time with him.

So how did the recipe ever get into that museum if it had been lost in the present? The only explanation is that the roots of this knowledge being available in the museum go back to the very same piece of paper which has been taken from the museum itself. So it is a hen-and-egg problem: The presence of the recipe in the future museum depends on it being there for the time traveller to take back to the present.

While time travel can be a great plot device which can be the basis of interesting and original game design, it has to follow some inner logic. Not everything can always be explained (otherwise, we would have real-life time machines by now). The rules of time travel as used in this particular game have to be explained and after that abided by.

On the other end of the spectrum, the pure plot-device time travel games do not really have to worry about this. At the same time, they also cannot take credit for all the intriguing thought patterns which can make a game interesting – they have to depend fully on their non-time-travel gameplay to be exciting enough.