There is something afoot in German gaming circles! Now that the resurrected Grand Prix has been run with relative success twice already again, it was joined by another competition called Herbstlaub this year. This was advertised as the German Spring Thing, i.e. it should provide a forum for “longer” games.

Out of the eight announced participants, two actually made it in time. This is, of course, the absolute minimum, but nevertheless not a bad number, especially compared to Spring Thing (which usually comes out with three to five games)! What makes it especially noteworthy, though, is that the two entrants could hardly be more different.

On one side, we have Homunculus. The player takes over the role of such an artificial little human being who is tasked by an alchemist to carry out a couple of missions (all involving theft). Lining up against this is Dr. Kong in: Exploding Poodle Inevitable (yes, that game is also in German). In this “second episode of the Dr. Kong saga” (no knowledge of the first part required to play), you have to liberate a good friend from fiendish kidnappers – discovering a huge (and completely crazy) conspiracy in the process.

In many ways, these two games are polar opposites. Not even concerning quality, but in the way they are made and motivated. Homunculus has been developed with painstakingly professional care and it is obvious that a lot of planning has gone into architecture. The plot is clear and it is told using classic dramatic patterns. Die difficulty level of the linearly structured missions rises slowly. The puzzles originate fairly organically from the plot and the world.

Dr. Kong, on the other hand, teems with the untamed enthusiasm of amateurs. There is hardly a coherent plot to speak of. The world might as well have been constructed by random generator. Implied causality between correlated events is sketchy at best. Some of the game logic does not seem to work quite as it was probably intended by the authors. The frequency of inappropriate parser responses is much higher than in the other game. And in the second act of the game, the player is reduced to running errands for other characters (“Bring me object A and I will give you B in return”).

In spite of all these perceived objective criteria, what counts in the end is fun. Both games try themselves at the humour genre, but Homunculus leaves a bit of an undecided impression in this respect. The primary narrator tells the thin and relatively uninteresting story in a serious tone. In an attempt to spice things up, the text contains “footnotes”: Additional comments about these particular words or sentences can be viewed separately at the player's discretion. These “footnotes” usually contain sarcastic comments.

The author cites a series of novels as inspiration for this stilistic device. A probably better known application variant of this idea can be found in movies. One prominent example is The Hallelujah Trail. In this comedy Western, there is also one very serious main narrator who is often disturbed by a second voice offering “ironic” comments on the side (even usually announcing his intention to do so with a preceding chuckle). The inherent problem of this approach, whether in text or audio form, is that it is “announced humour”. Imagine one of these old-fashioned comedy shows where some guy would tell you some story from the stage and then… pause… drum roll… the punch line (with a lot of nudge, nudge, wink, wink)! This is a “agreeable” and completely harmless kind of humour, because the receipient will always know when to laugh (when he's allowed to laugh). If this is your cup of tea, fine.

Dr. Kong never even tries to enter such well-defined spheres. It simply throws silliness, absurdity and quotes at you. The game relies on the scattershot method: If you provide enough material, something will have to stick in the end. That is why a sober mathematical count of the jokes which work versus the rest will not look very favourable; especially since quite a few jokes have just been taken from other source (“Help, I'm trapped in a fortune cookie factory”) or their topicality is just too high (the reference to the “German Photopias” become completely cryptic sooner than you might like). However, and this is the reason why this method is still a relatively efficient one, what people remember in retrospect is the moments which worked, the ones which actually did make them smile.

This fundamental difference makes it pretty much impossible to rank these games in the scope of a competition. The games cannot really be compared on a one-dimensional scale. At first glance, everything seems to be in favour of Homunculus, but Dr. Kong's careless attitude makes it more sympathetic. Exaggerating slightly, one might call this the embodiment of the biggest (and unresolvable) discussions about game design: flawless and thought-out craft versus untamed creativity.

However, it might also be usage of modern techniques versus the reliance on well-known conventions and schemes. Homunculus, for example, avoids the admittedly strange convention of the genre to move according to compass directions. Outside of cave exploration and pirate treasure hunts, this makes little sense anyway. Dr. Kong, on the other hand, shamelessly “defines” that one factory building is “south” of the other. This is another one of these interesting, but finally not answerable questions of what is “better”: The old convention is without a doubt much more efficient for experienced players. However, more and more people are asking how many of these there are left anyway.

Putting the games themselves aside, there is another question, of course. How did the competition go? Did it achieve what it attempted to do? Will there be a followup next year? One purely positive conclusion is that by running Herbstlaub, there have been two new, solid German games which otherwise might not have come into existence. This alone already makes it a success.

What about the other goal, the one about encouraging longer games to be produced, though? This is where a few doubts might creep in. Both competitors would still roughly fit into the size restrictions of the Grand Prix (equivalent of the English IF Comp). This makes sense in some ways, especially since it can be observed that the average IF Comp games become shorter and shorter every year. Hardly anyone actually uses the two hours play time allowed as per the rules. Maybe it is just the general perception of what is “long” and “short” which has changed. In any case, this year's Herbstlaub did not provide enough raw data to form a real conclusion on that count yet.

Maybe this will change in the years to come. Not just out of that idle curiosity, we should all hope that this will not have been the last time this event it held. 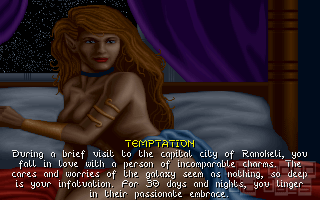