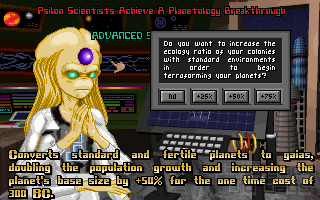 Mr Creosote (2012-06-29):
That could be a winning strategy. Just that you might need to substitute the Psilon with someone else - computer-controlled Psilons never make it far in the game in my experience. It really is strange how AI and human players seem to be able to be able to use very different traits to their advantage.
Kruegon (2012-06-29):
I think you guys are missing one important factor with the Darloks. They may have no outright advantage, but as stated earlier, you pretty much get any tech you want. Also, once you are close on tech, change to sabotage. You can dedtroy missle bases making landing parties easier. if you have the tech and they do not have the defense, you WILL overtake the planet. Want to play Darlok and not piss everyone off? Focus only on the Psilon and whatever race you plan to attack. Take the races out one by one and steal the tech of the Psilons. If you are really good, you even get to blame it on other races.
dregenrocks (2010-03-02):
Originally posted by Mr Creosote at 08:17 on March 2nd, 2010:
That's true, but remember that after a while, everybody will hate you. Sure, a technologically very advanced race can fight everyone else at the same time, but the Darloks can't be more advanced than the other races by definition (since they get their technology from their enemies).
But may be able to bring more resources into production permanently instead of research in opposite to all other races.

dregenrocks (2010-02-28):
Originally posted by Mr Creosote at 10:07 on February 27th, 2010:
Hmmm... someone must have argued against the Psilons ten years ago, otherwise, the discussion wouldn't have spanned fourty posts or so 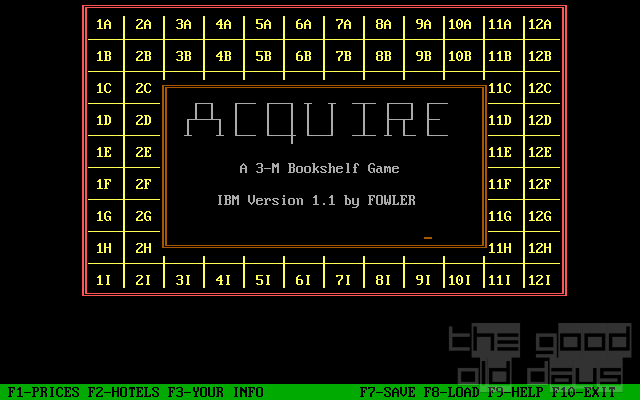