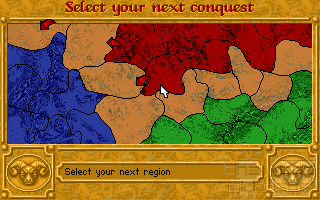 I agree about this being a mandatory candidate to play.

I don't agree about gameplay versus presentation, on the other hand. It was extremely flashy for its time, graphics are way above most of the competitors (well done, Ren & Aaron), sound and music are changing according the the situation and so on. Gameplay, on the other hand, is fairly limited once the novelty is gone.

I own the game (it was part of the "10th anniversary collection of Westwood"). IMO the game is important because it the grandfather of the "command & Conquer" series. Therefor it is a game worth playing to see the roots of this highly influential series.

To the game itself: I play it now and then (not such a big strategy fan!) and I enjoy its focus on gameplay and not presentation.

In its time a game you should have played, now a jewel of long gone times.

Elie Arabian was hired end of 92, if he worked
on Dune II it was minimal.
Myself and Aaron Powell did 98% of the graphics.

Wandrell (2006-11-15):
Maybe not in all levels, but I remember those things appeared, but well, I haven't replayed the game in a long time.
Mr Creosote (2006-11-15):
Quote:
In the PC version once a spice field was depleted a pre-spice mound appeared. If you shot to it, or a unit passed over it, it exploded, but gave little spice compared to what was before.

Are you sure? I certainly do remember those 'things' which 'openend' a new spice field when shot at, but I also remember many times when I was just completely broke, because there wasn't anything to harvest anymore.

Fun (or not so fun back then) fact: This game runs on an Amiga 500. The emphasis is on 'runs', however. Later levels are more like watching a frozen frame... wait, I've seen something move! Completely unplayable on stock models.

In the PC version once a spice field was depleted a pre-spice mound appeared. If you shot to it, or a unit passed over it, it exploded, but gave little spice compared to what was before.

There is a remake, Dune 2000, but it is too similar to Command and Conquer, I do not like the changes like that having more than one units building only serves for training faster, not for training more at the same time.

I've played the genesis/megadrive version, but not any of the computer versions. I liked it a lot, but agree that it needed some sort of skirmish mode. It also needed a non-fixed total income, ie either have some second way to get cash besides harvesting spice, or have the spice fields renew themselves occaisionally.

A game which aged extremely badly. Although it impressed because of its technical merits when it was new, I just can't get myself to seriously play it these days. It's just repetetive, fussy and in the end unchallenging.

Also: One of the two games responsible for the whole industry going down the drain. Because of its success, everybody and their dog wanted to imitate it, resulting in approximately 50% of all games being identical to this one for a long time (the other 50% being Doom clones).

Wandrell (2006-05-28):
I remember how I liked this game when I first played it, but the biggest problem I found for not playing again was that it lacks the option for playing a skirmish. On this kind of game I tend to not find too fun playing a campaign that slowly allows you to have more units and that lacks variated missions.
[Reply]