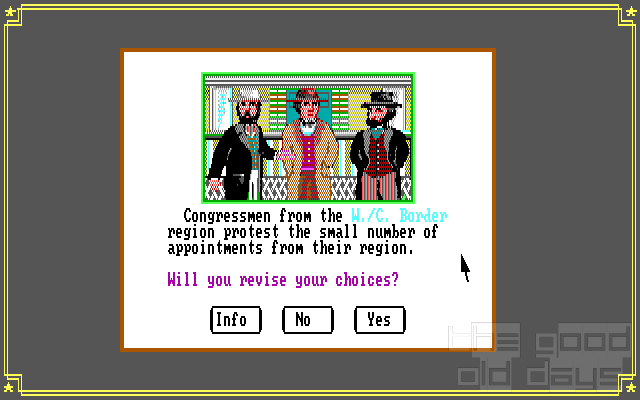 Mr Creosote (2010-08-15):
Very good strategy advice! The point of the AI cheating, however, remains. No matter which side you choose yourself, your opponent will inevitably pull ahead in money as well as army strength early on. I don't mind the challenge this represents, but it's the obvious unfair means with which this is achieved which bothers me.
thebard (2010-08-15):
Quote:
The AI cheats. No matter which side you choose, you will always have severe internal problems to overcome in the early game: the congress won't let you increase taxes or introduce conscription, preventing you from earning enough money and building up a decently sized army - while your opponent apparantely doesn't have those problems at all. There are nasty indirect effect of this, too. So you can't recruit a big army; which means that your generals will be disappointed with the commands they receive; which means that their home states will be disappointed with you for not fulfilling the wishes of their local heroes; which means that in the best case, you will only be able to recruit a few less soldiers next round, but probably, it'll even cause riots against your government. Again, no problem on the other side of the war - unless you take control of it yourself in the next game.

I've played this game more then I can remember. I've won the game in the hardest difficulty (although that was with Full intelligence on and traditional general ratings/prestige) and the opposite side will struggle as the tide turns against them. For example, taking control of a good amount of the Old Northwest as the CSA will cause riots. The problem is balancing your rabble rousers (I forgot the name of the phrase). If you try to cause Sedition too early in the game in the Mid-Atlantic and New England areas it has the opposite effects. But as you win major victories the ability of your agents to cause sedition increases. I've had times as the CSA when I was able to bring down New England to a 4 loyalty while I had a 4 in the same area.

Increasing Taxes and Conscription will give you a warning of how congress is reacting. Sometimes when raising taxes or conscription you can get it approved even if congress has a negative thought towards it. The reality is though is that it's a war, you can feel free to go into as much debt as you want. As the Union it takes a while to actually raise inflation and fall into debt. As the CSA you'll always be in debt, but if you can get intervention (which should be one of your goals anyway) British and French loans will cure your inflation problems usually just at the right time.

Lastly the problem with commands is relative. Without looking at the stats, let's just say McClennan has an 8 prestige and a larger army then Pope who has a 7 prestige. McClennan refuses to move, but Pope attacks and wins a battle. He gets 2 prestige for the victory moving him up to 9 prestige. When giving out commands next turn you can either shift troops from McClennan to Pope so that Pope has the larger army, or you could just switch Pope and McClennan's command. You never have to create new commands, it's just a matter of moving leaders up and down till people stop complaining.

Great review though, and a great game that never gets enough love.