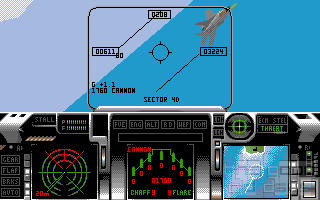 Moebius (2016-05-19):
Too bad Herr M. isn't around anymore, thought it would be good to let him know, that i've been playing Apache Air Assault (2010) since winter and only now have realized that it's actually made by a russian company (Gaijin Entertainment), and, yes, in this game you can fly Apache AH-64D Longbow attack helicopter or russian Mi-35. The game is nice, though without a multiplayer there isn't much to do. Once you have completed all missions you can just remove the game, unless you wanna practice free flight some more.
Moebius (2016-01-12):
Quote:
Just out of curiosity: Are there any Russian (or Soviet) flight sims that let you fly American aircrafts?

Herr M. (2016-01-12):
Originally posted by Moebius at 06:26 on January 11th, 2016:
Once again, in the best Cold War traditions (and particularly its western participants) the only side you can pick here is NATO and the only enemy you have are the Soviets and presumably WAPA satellites flying MiG-29 and Su-27 aircrafts.
As much as I have to agree with you, I guess tensions where still far too high, even back in 91, and selling a (serious) game in which you play the Soviets was simply unthinkable in the US, as interesting as it might have been.

Mr Creosote (2016-01-11):
Quote:
It first came out in 1989 as Amiga and Atari ST port, and one year later there was released a PC version, whose only principal difference was implementation of head-to-head mode to play via modem against real human opponent, which for 1990 game is a rare plus.
Once again, I'm questioning the release dates. ACE reviewed the Amiga version in its June issue of 1990. The PC version 'soon' coming out was announced in February 1991. Do you have contradicting information? (Copyright year is not always release year, in case that's the problem.)
[Reply]