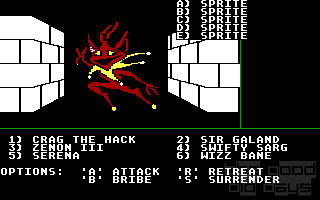 You mentioned that "The game offered several interesting and rather advanced things that even later games could not improve. First was the fight. It was round-based and you had to assign each character a task for the round. The tasks were simple - fight, guard, spell, dodge, etc. The same fighting system was also used later in games like Bard's Tale and the Wizardry series." I would just like to offer a quick correction. Wizardry I, Wizardry II, and Wizardry III all came out before Might and Magic I. Therefore it was Wizardry that invented this turn-based interface. In fact, as far back as I can remember, "Wizardry, the Proving Grounds of the Mad Overlord" was the first attempt at putting AD&D type rules into a computer game. Perhaps Lord British's Alakabeth pre-empts this... I'm not sure, but it wasn't as revolutionary as Wiz was.

What made Might and Magic so amazing is that it was the first game that was so large in its scope. Wizardy 1, 2, 3, and 4, as well as the first Bard's tale were all in "indoor" or "dungeon" type settings. Might and Magic dared to do gigantic "outdoor" type levels, and 80% of the challenge of the game was to simply map the whole thing.

NetDanzr (2006-06-10):
Quote:
Might and Magic was created by a small group of people, led by Jon Van Caneghem in 1987, as the first game of the highly acclaimed New World Computing. The story behind releasing the game sounds almost like a fairy tale. After Might and Magic was finished, Jon Van Caneghem approached numerous publishers, only to be rejected time and time again. He decided to publish the game himself, from his apartment, and it turned to be a surprise hit, selling 5,000 copies the first month. After that, he managed to land a sweet deal with Activision, which enabled New World Computing to remain the publisher, and Activision only handled the logistics.