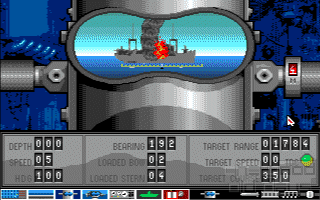 A very mature Amiga game. Looking at its theme, it's obviously not aimed at the same target audience as the endless flood of Jump'n'Runs, but on the other hand, it's also not some ultra-realistic simulation which would scare most people off.

You're the captain of a submarine of the US Navy in WW2. The setting is the Pacific Ocean, so the bad guys are the Japanese. You can choose to play either a single battle or a whole 'career'. In the latter one, you start in 1941 and patrol a certain zone for Japanese ships. If you encounter some you can either run away (why are you playing this game then?) or try to destroy them. You're taken to battle mode then. This is where the real game begins.

Now you're looking on the water from your sub's bridge. But this is pretty useless as you can't give many commands from here! For that, there are many other “rooms” (i.e. perspectives) which you can “enter”. The most important ones are the map (with different zooms), the periscope (when you're dived) and the cannons (when not dived).

You're always on your own while the enemy ships protect themselves in convoys. Many opponents to destroy so. But no other ships to command. It's still necessary to think about the right strategy. Which ships have to be destroyed first, as long as they haven't noticed me? How can I hide when they throw water bombs? And so on...

The controls are mainly done by keyboard, but the Amiga version (in contrast for the one on the PC) also features the mouse for some things. That makes it a lot easier of course. A short period of learning is required to get full control - but after that everything is really smooth.

Graphics and sound won't blow you away. It's the atmospere that makes the game so great! When sitting deep below the surface (even deeper than the sub's test depth), hoping that the destroyers will not notice you, you sometimes catch yourself sweating in front of the monitor as if it were real! 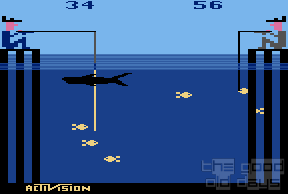