Icicle Works
for Plus/4 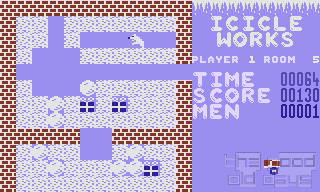 It'll be Christmas soon, and Santa Clause has a problem: the presents have been destroyed and the pieces are scattered all over the North Pole. There isn't a lot of time to find and re-assemble them. Well, the latter part will at least happen automatically if the player (in the shoes of said mythological creature) manages the former.

In practice, this takes the form of Boulder Dash. In sixteen levels, you collect toy pieces while avoiding avalanches (~boulders), different types of animals (polar bears and ferocious killer penguins) roaming around the already cleared space and the occasional underground spring which have the nasty habit of slowly flooding the tunnels. The latter make for an interesting challenge, as their threat potential can be calculated while nevertheless staying dangerous. The animals simply behave too eratically to really be fun.

What sets Icicle Works at least a little bit apart is the fact that the levels are not presented in linear order, but they are interconnected through doors. For example, it's possible to leave the tenth one towards no. 7, 8, 12 or 13. Revisiting already cleared stages is also possible, for example to increase score further or just to walk through to another, yet unknown level. Basically, the whole game is one big space. Another nice factor is that there are more toy pieces in each level than strictly needed. This enables different possible strategies and also highscore maximisation (collecting extra pieces within the alloted time scores extra).

The colour scheme and especially the funny animal sprites which are well animated establish the winter theme well. The game plays fine and even if there aren't sweeping changes to the concept, you at least get additional levels of the more complex variety compared to the original. Why play this particular one over other variants? There are no compelling answers. The only answer is: why not? 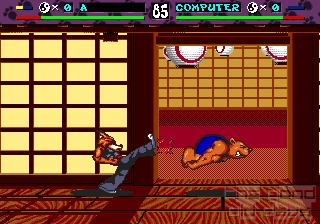