The Way of the Tiger
for ZX Spectrum 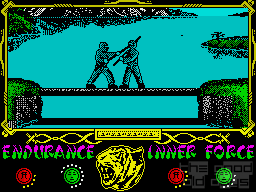 Dedicated to all true beat 'em up fans! You are to take part in the most bizarre and outlandish tournament, where the common reality strangely overlaps with a mythical fantasy world, which yet oddly enough perfectly resonates with the martial arts theme of the game. You, a fighting ninja warrior (with a bit of shaolin flair) are to encounter and defeat a number of fearsome opponents, and to compete in three major fighting styles featured in the game, specifically unarmed combat, pole and sword fighting. Accept the challenge if you dare, and may the victory be yours! Absolute masterpiece of its own time and platform, and quite honestly the best and most enjoyable fighting game I ever played on Spectrum.

Ok, so this is the Way Of Tiger, quite a phenomenon on the old school arena, for at least one reason that Gremlin Graphics did their best to furnish this game with everything beyond your wildest dreams: amazing graphics, smooth animation, rich selection of moves and a motley crew of foes, yet it was never properly introduced and treated with due respect and today is only known to but a small group of Spectrum, Amstrad and Commodore veterans scattered around the world, one of which happens to be me, which makes it my duty to share insight concerning this fabulous and outstanding fighting gem of 80s. And when I say this, I mean oldschool computers, not arcade systems, consoles etc.

The game consists of three parts, as was said earlier, only they are not conjoined in one unit, nor do you neccessarily have to load them up one by one as you progress through the game. They can be played separately and yet all 3 of them merely represent different modules of one single game, bearing a single name. The major difference between all 3 is that only the 1st features birectional horizontal background scrolling and allows you to walk along the road and traverse an infinite amount of distance, which is actually a loop, but it sure does create an impression of a long and unrestricted journey, while the other 2 feature a fixed ground confined within the limits of the screen, which is standard for most 2x2 type beat 'em ups. By the way, the background responds to some of your movements as an enhancement to the gameplay. When you jump up the ground sinks down a bit, and when you crouch it goes up.

Your character may not seem to be much of a rambo at first, but once he starts moving you realize that there's an awful lot of life and charisma to him. His confident and leisurely pace (only in the first part of the game) immediately strikes you as mighty awesome. The background is also partially animated and charmingly picturesque. It's adorned with pretty landscapes and lofty mountains, a variety of ornament, such as rocks, flowers, pillars, fountains, monuments, shrines and some living elements like birds and distant people.

Enemies are weird. It starts off with just another copy of you, but once defeated you will face a number of odd beings, which get tougher as you take them down one by one. Some tend to respawn, sometimes even transform, but next time appear somewhat tougher and with greater stamina. Also, some of your hits may appear ineffective against certain creatures and you will have to resort to a limited number thereof. Your life-o-meter, and your opponents' for that matter are a little confusing, but it won't take long until you realize how it works. Also, it takes time to get used to the controls, for there is a total of 8 hits that you can apply, but once you've mastered it you are one formidable dude, for this game, quite honestly, is by default made to win, which in either case doesn't at all deprive you of all the fun and amusing complications.

Although the variety of moves exercised in this game, great as it may be, is still outnumbered by those of similar games such as Yie Ar Kung-Fu, The Way of Exploding Fist or International Karate+, they, nonetheless, have their own compensating disadvantages such as either jerky animation or a lack of diversity of challenge. WOT is apparently a perfectly balanced synthesis of all three.

I dare say that WOT overshadows most known fightings of old days and yet for some strange reason it was never given enough credit. You should definitely look forward to playing, or at least watching this game while you're still alive. It's an absolutely total MUST for all fighting maniacs out there and must be included in the world's top fighting compilation.

Once again there's a little glitch that the game developers have kindly overlooked for us to take advantage of. I don't know if anyone has ever discovered it except me, but here it is. Press three buttons simultaneously, namely RIGHT + LEFT + FIRE (best to hold fire first and then press the remaining two) and your character will collapse to the ground as though in a defeat, but then he quickly gets back up. It's particularly useful in the 2nd part of the game, where the bridge (which, mind you, is quite slippery and dangerous to jump on) does a little magic, and by using the above shown combo it makes your dude fall off the bridge, but NOT drown in the river. Instead he gets up while standing on god knows what (Jesus?!), which allows you to attack enemies from below while making you invulnerable to their attacks. Have fun!

Moebius:
Feel free to share anything about The Way of the Tiger (1986) here!
[Reply] 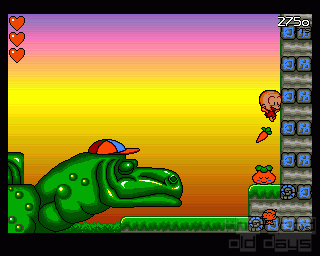