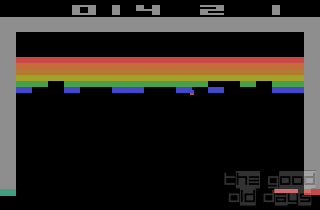 Breakout… need I say more? Come on, folks, you all know this one! Designed as a single player version of Pong, it replaces the second paddle with a brick wall from which the ball simply bounces back to the player – destroying the brick which was hit in the process. Repeat until all bricks have been removed from the board. Following the success of the Arcade original, a port to Atari's own home console, which was still in its infancy at the time, was the logical next step. So how does this version fare?

The paddle controllers lend themselves well to this sort of game where you can only move in one dimension, obviously. The basic game remains intact and faithful to the original, apart from the difficulty having been slightly toned down: you get more balls to destroy fewer rows of bricks. Makes sense considering the home environment which was not aimed at milking quarters out of the players. Which, given the small space everything takes place in, the ball's increasing velocity and the sometimes unpredictable angles it will bounce off obstacles, is still pretty tough!

On top of the classic version, the game features a couple of variants which can be combined as well. Some are not particularly noteworthy, such as the timed ones – this is probably supposed to add some pressure and it may be nice for long-time players who need another angle of optimisation, but to me, it seems pretty useless. Similarly, the invisible wall modes, in which the bricks only appear for a split second when the ball hits them, seems like a particularly silly idea.

The rest of the ideas are sort of middle ground. The ball being steerable after being catapulted off the bat may appeal to expert players, but again, it's not for me – controlling both the bat and the ball with the same directional controller makes things even harder. The sticky paddle, which enables the player to catch the ball, move around with it and only release it again in a controlled way, goes exactly in the opposite direction and especially makes the end-game, when there are only few bricks left, much easier. 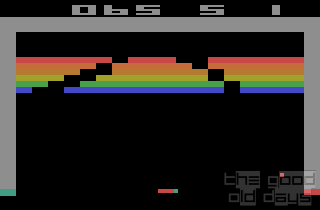 Last, but not least, there is Breakthru, in which the ball will fire right through the bricks, i.e. destroy many instead of one in one shot. Somewhat ironically given the game's inception, there is even a multiplayer mode. Out of four contestants, two can play simultanously, each player being responsible for one half of the playing field.

So, all in all, Breakout on the Atari 2600 is serviceable. Though, the thing is, there is really no reason to play it whatsoever. The attempts to extend the original gameplay are really half-hearted. None of the variants introduce any major improvement to playability; you could even say the variants fail to introduce much actual variation. Case in point: the simultanous two-player mode which is particularly pedestrian in idea and execution.

Later official and unofficial versions of this classic managed to get much more out of this concept. And it undeniably is a classic alright! This version belongs in the history books. Both in the good (insofar that it was important) and the bad (insofar that it has been surpassed in all respects) way. If you want your purely nostalgic flash: go ahead!

Mr Creosote:
Colour, yes, but "dated" certainly is the right word for this one in every respect

And in full colour! Not even CGA-like.. i mean, surely, i'm aware of existence of such dated games, but i would never expect to see colours.
[Reply] 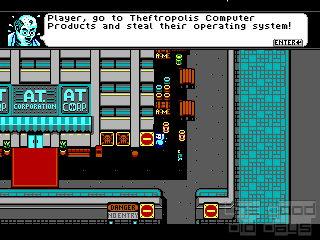