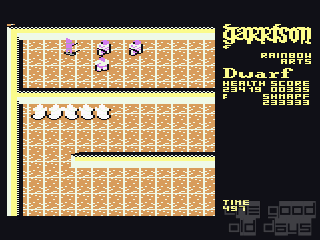 Aaah...Gauntlet! Probably one of the most popular games ever to populate the face of this earth. The moments when 'blue wizard needs help' made me lose a huge amount of time on my good ol' C64.
You'll wonder why the hell am I wasting my time on Gauntlet when I'm not talking about it...wrong! Well, almost; Garrison is much like Gauntlet, in fact, it's what we call a clone. Garrison was for Gauntlet what Corridor 7 was for Doom.

Still, in those days, 'clone' was not simillar to much worse. In fact, Garrison is NOT a bad game at all, and it made me spend a fair amount of time in its company.

Garisson shows quite good graphics. In fact, they are entirely inteligible, and before you start the game you can also have a look at your future enemies and the power-ups you can collect. The thing is also well structured, as the levels' complexity has a very nice curve. In fact, as a general idea, the game is extremely well balanced between the levels. You have a fix amount of time for completing a level, and the time decreases as the complexity of the levels increase. You'll wonder what complexity can be here...don't laugh, it's overhead view all right, but the levels are nicely developed. They get from a simple structure of rooms to an incredible and allmost impossible labyrinth.

There are also a few classes you can choose from: Wizard, Warrior, Elf, Dwarf and Valkyrie. Which is quite interesting for its time, considering that Ultima I (see the review) had less classes, and was a complex RPG.

And that's where we're going to the point: Garrison lacks a very important thing: challenge. Although I've been spending endless hours on the Internet trying to find the game's manual, I haven't been able to get my hand on it. And I haven't been able to trace a storyline. The only thing that challenges is to actually set a highscore. But that's absolutely no challenge: compare this to Ultima I and the way missions are structured. Garrison is no more than an average arcade game, Gauntlet-style, but still quite appealing after some time. 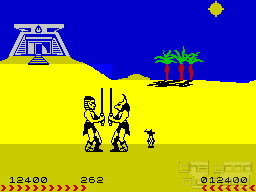