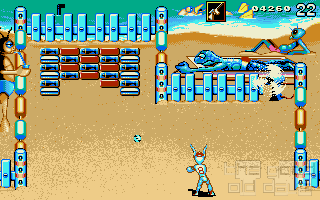 The 'Bricks' part of the title is really the defining one here. Make no mistake just because the protagonist is a clothed cartoon bunny wielding a baseball bat: this is still Breakout. So this bug (or another weird creature) throws a ball against the wall and Bunny (I guess that's his first name) has to hit it after it bounces off, propelling it back into the wall, where it again bounces back from, destroying the hit brick in the process. Rinse and repeat until all bricks have been cleared.

So far, so common. Bunny Bricks makes some of the features introduced by variants like Arkanoid a little less abstract. Not so much the bonus items which still appear out of thin air when some bricks are hit, but rather the limited control of the ball. There are four different hitting techniques which allow for some basic control over the direction of the ball. While this was certainly not unheard of at the time (even the Atari 2600 port of the original already featured something not completely dissimilar), it just makes more sense this way and it doesn't hurt the fun to see it accompanied by different sprite animations.

The second speciality is the level design. Indestructable blocks being in the way, clearing passages via locks or dynamite… these things introduce basic puzzle elements into the mix and require at least some basic tactics how to approach the respective levels.

One small irritation hides in the controls. Illogically, the bunny sprite has apparently designed as a flat paddle collision-wise. It's not necessary to hit the ball with the bat; actually, it's not even really possible! No, the ball actually has to get very close to the body instead – regardless of whether you're doing a sideways hit or an overhead swing.

So while there is certainly still some room for fine-tuning left, the level variety is pretty good compared to many other Breakout clones. Sure, sometimes it's nothing more than a change of background graphics, but new elements which actually make at least a little change to the old formula – like fans affecting the ball's direction or obstacles making it necessary to hit the bricks indirectly – are being introduced about every other level as well. This keeps motivation up longer than usual, and for once not just through making the levels gradually faster (harder). Cute graphics (simplistic even for 1993 standards, but more than adequate) complete the positive overall image.