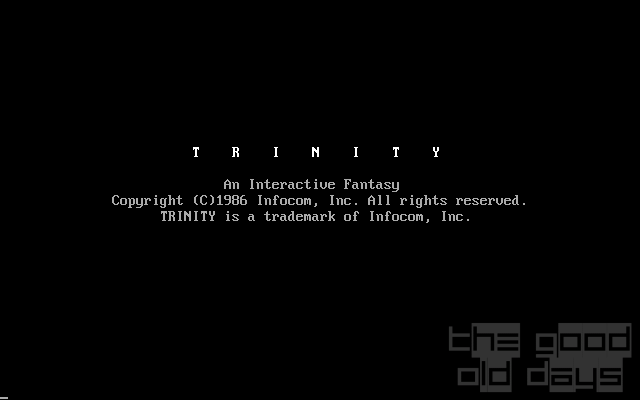 One could argue Trinity came three years too late. The US Senate refused to ratify SALT II even already a couple of years earlier, the civil Korean Air Lines Flight 007 was shot down out of paranoia in September '83, the Able Archer excercise showed a new quality of macho provocation, and at the end of the same year, the German parliament finally made way for the implementation of the NATO Double-Track Decision, i.e. the stationing of new nuclear missiles right at the iron curtain separating Europe. The most striking example of fictional media coverage of this new height of tension certainly was The Day After, first shown on TV the very same year. In 1986, when Trinity was released, even though the situation certainly was anything but stable, things seemed to be developing in the opposite direction already again. Had Infocom taken too long to deliver their treatment of the mainstream fear of nuclear war?

The good news is: looking at the actual game, this issue of topicality doesn't really occur, because the game doesn't consider its own references to real-world events of the then current world all that essential. Rather, it attempts a more philosophical examination of what nuclear weapons mean, how they have changed the very nature of our world. This, looking all around us even today, in the knowledge that with the metaphorical push of a button, our world could still be obliterated instantly, is a safely timeless subject.

The game begins in a not fully specified near future, in London's Kensington Gardens. Visiting the quaint old world as an American tourist, things are quite a bit weirder than expected. Most importantly, strange occurences prevent the protagonist from leaving the gardens, and the grass seems to have a life of its own. Time is also upset, with random speedups and slowdowns.

Turns out, these are effects of the imminent impact of a nuclear missile. World War 3 has begun and the world is about to be destroyed. Right before the impact, the protagonist finds a white door hovering around – and behind, a surreal landscape awaits him. This vortex happens to be the portal to different historical events related to the development and proliferation of nuclear weapons which can be visited after figuring out the functions of a large machine.

So the player jumps from scene to scene, each time (ideally) narrowly escaping a nuclear explosion and retrieving an artifact to bring back to the vortex. Very likely, these short spotlights are supposed to get the player thinking about the horror of nuclear weapons, but also the inevitability of their development.

Though, and this may be seen as boon or bane, the plot fully depends on the basic leitmotif of the history of nuclear weapons – it loses all momentum it may have had in the opening scene once the player steps through the first white door. The game relies fully on the player's curiosity what this strange world may be, what it represents, to keep him going. Only in the very last episode, set at the Trinity site, where the first successful nuclear bomb test took place, a clear goal is stated again. In between, it's all just exploration for the sake of itself.

Whether this works is a very subjective question. It is a quality of the game insofar that this avoids abusing the theme for a Hollywood style sob story about tragic individual fate. On the other hand, and of course this is hard to judge from a retrospective viewpoint 30 years later, the imagery borrowed from Alice in Wonderland and Through the Looking-Glass prevalent in the vortex leaves a sour taste. Though whether it has only become tired and overdone since then (nowadays, every other text adventure does the very same thing, so that it has been done to death) or whether it was already unoriginal back then, is virtually impossible to say.

What can be said for sure is that the balance act between the scenes is a fickle affair. The main impression is that vortex and the historic scenes do not differ enough in tone and setting. Stepping through these white doors, the protagonist does not escape the surreal elements in favour of stark, bleak realities. Rather, the surreal elements also creep into these sites. This certainly made sense in the case of the opening scene in Kensington Gardens and sometimes, it is masterfully done when concrete elements from one scene re-appear in a slightly adapted form in another (like the boy blowing soap bubbles), but when there are no such parallels, it feels out of place, or at least does not enhance the experience in a meaningful way. In fact, this makes it even hard to identify many of the settings or, even worse, tell them apart, as they are not nearly as distinctive as they should have been designed to achieve the maximum effect of such a game structure.

In a similar vein, the artifacts which have to be found and taken from each scene are unfortunately of little symbolic value with respect to the central theme. Pick up a shovel here or a walkie talkie there. These are items of practical use for later episodes. This seems like a missed opportunity to really merge the thematic and gameplay levels into one unity.

On the other hand, especially compared to Infocom's other big experimental contemporary game, A Mind Forever Voyaging, Trinity at least retains this level of classic adventure gameplay at all! The player isn't relegated completely to the passive role of an observer. There are puzzles to be solved and they are, at times, ingenious and almost all make sense in the context of the environment (considering that it's easier to write good puzzles in a surreal fantasy world, because suspension of disbelief goes further in such a premise). Just the endgame, with its tight turn limit, maybe goes a little over the top difficulty-wise.

Trinity, and also AMFV, are often cited as major influences of what amateur and semi-professional text adventure writers are trying to achieve to this very day. On the long run, it now seems the formula of the latter game won out: Trinity is still far more grounded on traditional puzzle gameplay which has become quite unpopular over time. One could argue it was an intermediate step from the likes of Feasibility Experiment – a very traditional treasure hunt set in a surreal world with disembodied voices talking to the protagonist much like Trinity, just lacking the bleak real-world topicality – and AMFV.

Though it may just as well be argued that Trinity would have made the superior blueprint, because it at least attempts to combine cerebral gaming activities with cerebral thematic engagement, i.e. it doesn't take the lazy way out and does give the player something to do. Sure, this combination is not fully successful on all counts, as pointed out above, but the attempt is there and its relative success has still hardly ever been matched in the thirty years since its publication: most of the Alice-inspired (or otherwise surreal-but-really-meaningful) self-proclaimed 'literary' games of our times mainly consist of cringeworthy overwrought symbolism coupled with the attempt to cram ultimately shallow meaning down the player's throat.

Trinity may leave many things open, yet it doesn't do so shying away from serious answers, but rather uses symbols where appropriate and takes its player seriously in the way that it does not put independent thinking and interpretation past him. The way all good classic science fiction short stories did.

It could have made it easy for itself, just singing the song of the evil of nuclear weapons, and the target audience's applause would have been not a bit less. It must have been quite tempting, given the zeitgeist it sprang from. As soon as you move away from the obvious ('nuclear holocaust = bad') and take things to a human level, everything turns grey and complex. Maybe, though, it is exactly this complexity of the questions raised rather than the clarity of the answers given which makes this game so enduring.

And, getting back to the relevance of classic (or old-fashioned, depending on the way you look at it) gaming elements, the active experience the game provides helps to imprint the thematic points just all the more in the player's brain. Memories work by association. Reading about fascinating issues can be an amazing intellectual experience. Associating the same points with the success of having solved satisfactory puzzles to get there takes the experience to a positive emotional level.

This aspect could have been much stronger if those puzzles had been stronger linked to the thematic questions on a symbolic level. Though we have to be lenient with Trinity on this count: it was modelled from scratch without the luxury of many archetypes. The interactive storytelling techniques established since then were not nearly as well studied in their effects. Considering this, Trinity stands up very well today, not just as a seminal game, but as one which still deserves an unreserved recommendation. 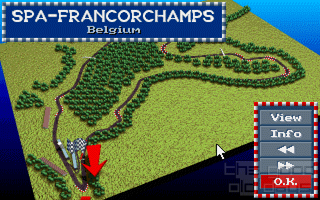