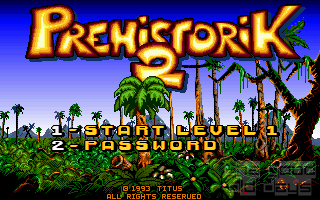 Ooga Booga Bang Bang! Me hungry, me go find food, me good! And so you, an awfully starving caveman, set out for a long perilous journey to gather as much edible (and non-edible) objects as you could possibly or impossibly carry away. Armed with a club you work your way through wild mountainous terrain and tropical jungle swarming with ferocious birds, animals and other baddies who don't quite sympathize with your noble aspiration. But regardless of that, time or weather conditions, you're driven forward by one and only passionate desire: to stuff your belly until it wants no more, which is apparently a little more than your average human being can swallow. Good luck and bon appetit, Mr. Glutton!

Prehistorik 2 is a well-known and legendary platformer, which, I'm sure, most of you are damn well familiar with. I mean, is there anyone of you who didn't play it on his mother's good old 286-386 AT? Anybody? Incidentally, it's a significantly enhanced sequel to Prehistorik, the latter, I figure, has never been as popular as its successor, due to inferior graphics and gameplay. However, exactly the first chapter was adapted for a larger number of platforms, such as Amiga, Amstrad CPC, Android, Atari ST, CDTV, DOS, iPad, iPhone, while 2nd has only ever been made for CPC and PC (DOS), yet it is obviously far superior to its prequel, and I'm totally clueless as to possible reasons for such injustice.

Hands-on game thus. Video and audio are absolutely splendiferous. I would even go so far as to say that this was probably one of the very best games ever made at that period of time owing to graphics and animation alone, the overall quality of which could be easily approximated to any known classic console game such as, say, Flintstones, Earthworm Jim or Sonic the Hedgehog, which slightly contradicts the whole PC gaming philosophy, but i dare say, in a good way. However, the gameplay itself seems to slightly swerve from the commonly experienced, as it were, orthodox (S)NES'quette or SEGA'ish behaviour: it's unusually hard to beat, which makes it a little less friendly than it looks, not to mention a few other contradictory elements.

As you make your first steps in the game you might immediately notice that your character responds with a little less than expected promptness, which is actually an enormous contribution to game's difficulty, as you may further prove valid. In spite of a relatively harmless nature of enemies you may still somehow find yourself at their mercy. It requires a great deal of carefulness and precision to jump from one spot to another without falling down, running into someone or something etc. There are 2 more weapons you can avail yourself of, a mallet and something that looks like tomahawk, but those are yet to be found. Bosses aren't as regular as an average (S)NES player would expect. Personally, after completing the first stage and seeing no boss at all I quickly assumed there are none in the game. This isn't entirely true, but I have to say, they are quite scarce, and some of them even tend to recur.

And finally, there are caverns and secret spots here and there which hold numerous objects and are rendered visible by working your club/mallet either in the air or on the ground, just as there are hidden ledges and passages leading to something like bonus rooms. Remember, it's not all about getting through alive, you should strive to collect as much food as possible, as well as other unrelated but nonetheless delicious items, the totality of which will be displayed in percentage upon completion of every stage, where a bottomless stewing pan appears and receives your mixed trophy.

Fortunately for us, in this game you can actually get passwords for every level you've got onto, you can see those literally floating in the air, about halfway toward the end of the stage, which seriously alleviates the pains of a slightly complexified gameplay. In our age of internet you can beat the game in no time, but that obviously would be cheating.

In conclusion I wish to say that this game here is a living legend, albeit not perfect in every aspect, it still is unforgettable and praiseworthy in its own exclusive way. In a sense, it crowned the AT series of IBM PC compatible machines, specifically the 286 one, which, in fact, is the minimum requirement to run the game and something tells me it's not by any chance the game author has left us a message in a bottle that proudly reads:

Man, I'm surprised I've never come across this before: https://www.youtube.com/watch?v=QAyP2-0u_6c

Another sad case of "too late", especially after Donkey Kong Country streak, I imagine. But seriously this is times better than the original. Also, I don't even know how to reference it, as a similar game, remake or a sequel. The map looks kind of similar but in every other respect this is pretty much Prehistorik 3. Any suggestions?

Weeell, where to begin with: No, I have not played this on any 286, nor on 386, to be honest it wasn't until the late Pentiums, that I got my hands on this game. To top it off, I even thought that the first one (which I started playing at the same time) was a little bit more entertaining because it was even sillier and slightly more responsive, though by today I prefer number two.

I really love that message about it running on todays machines… more games should have something like that!