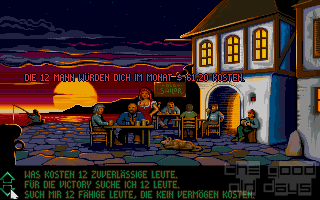 In 1869, Mohandas Karamchand Gandhi was born. To be able to visit him faster from England, the Suez Canal, connecting the Indian Ocean and the Mediterranean Sea, was opened the same year. In 1869, Austria was still located at the Mediterranean Sea. Today, Austria is not located at the Mediterranean Sea anymore, but this is not related to Max Design having gone under. Though exactly this Max Design selected the year 1869 as the title of one of their games, because the Suez Canal is so important for shipping. The game is less concerned with Gandhi, apart from the fact that it is fairly free of violence.

But what is this game really about? For a start, you receive some money. You can get more from the bank. With this money, you first buy a used ship. Later, you can also buy new ones, but this is not profitable enough at the start and also, delivery will take longer. Of course, there are some things to consider about the ships, like the material of the hull, size of the cargo bay and required sailors.

Even more important for later planning is the type of ship. There are sailing ships and steam boats. The latter only have a limited range. However, you don't need to consider the wind which is documented on an extra map in the game. In addition, there is a map showing currents. Remember: Going against the wind or against the current is not so easy.

After ordering a ship, we have to hire sailors in the pub. Now we have to wait a couple of days. Then we buy some goods which we then try to flog in the colonies. Textiles always work. In the colonies, we buy things like exotic woods or rubber which we sell off in Europe. At some point, we then have more money for a bigger ship or to open stores in other cities. Or we go bust, because we couldn't afford to constantly repair the ship, or because we got all our money confiscated when we tried to enter a port where there was unrest.

Concerning the presentation, the game is kept fairly simple. Half of the time, you click on some sentences in the bottom half of the screen while the upper half is graced by hand-drawn graphics. By the way, apart from entering the player, company and file names, the keyboard is never needed; everything can be controlled with the mouse alone. And thanks to the low resolution of 320x200 pixels, all important buttons are well usable on Android tablets (under Dosbox). For each section like bank/wharf/office, there is different music; in the offices, it is even different depending on the continent. This, like the graphics, is fairly well done, even if or maybe because it is only Adlib. The music can be inspected in more detail using the Adlib Tracker 2.