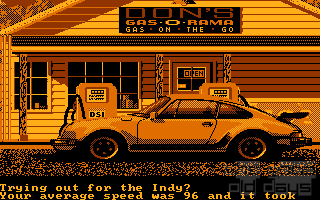 Test Drive is both a driving simulation and an action game rolled into one package. This is one the first games I played for the IBM/PC platform in 1987. By this point I already owned a Nintendo Entertainment System, so I had become accustomed to games with full color and a 4-channel soundtrack. Nevertheless the 3-D POV aspect coupled with the authentic attempt to simulate the subtle differences between each of the vehicles made this one a winner in my estimation. At the time I received this game, the unit my family owned was an Acer/Multitech 710 PC/XT clone, with a Samsung 12” amber monochrome display. This display adapter was an ATI graphics solution plus (CGA, MDA, Hercules, Plantronics) which did a great job of determining which mono mode to use, and in this case used CGA mono (which is way better than the unfortunate purple and blue pastel patterns that the CGA mode generates on a color monitor). The screenshots I have included display both mono CGA and EGA modes, respectively. Also, this game does not look very good in Hercules so I am thankful the graphics adapter had the good sense not to use this feature.

The game itself involves a round-trip journey from the dealership and back consisting of five independent checkpoints, under the guise of stopping for gasoline. This would suggest both the driver and the dealer only put a few gallons of gas in at each fill up or that the driver and/or passengers needed provisions as well as a restroom stop. During the stops, the game makes humorous remarks about the driving style of the player as well as generating a score based on the how fast each checkpoint is completed. The player is allowed five crashes per checkpoint which can happen from either blowing out the engine out colliding with other drivers. The only other ways to end the game prematurely come from colliding into a patrol car or averaging below 50 mph within any checkpoint. The game will store up to 8 high scores with a name entry option into a separate file, along with an image of the vehicle used next to the highest 4 scores.

Anyone who has played this game can agree that the scenery can appear to be lacking (which was addressed in the sequel). This never really bothered me at first as I was pleased with the attention given to the dash. There is quite a bit a detail and the player can easily understand what is happening. Upon completing the game, the player evidently is given the keys without a trip to the financing office!

Overall this is a fast-paced, high-energy game which was fantastic for its time. The Amiga version is the best of the pack, sporting considerably better graphics and sound and is version I go to nowadays, unless I am feeling nostalgic for the IBM monochrome version.

Moebius (2015-06-27):
Cool. I actually do have the floppy images of this one, but i'm not sure if they're good enough. I guess i should've just submitted them anyway... will do it later.
[Reply]