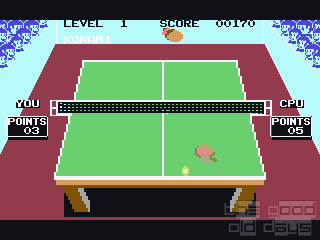 Yeah, I know… I'd rather play normal tennis

but for those without enough space or without the physical condition, the Ping Pong (table tennis) would do. And, to be sincere, table tennis is a pretty decent way to lose your evening.

Although you might have thought so, Ping-Pong has almost nothing in common with the classical and clone-master game of Pong, aside from a vague similarity between table tennis and simple pong. Ping-Pong is more than just a simple ballgame, it's pretty decent simulation of the table tennis.

And arguably, Ping-Pong is quite fun. After one ball you say "ah, just one more", then one more, and one more and so on. The challenge on level 1 isn't really great. But with difficulty set to maximum, well then, there's a challenge to tighten your reflexes. And really, although Ping-Pong might lack a bit of the motivation you need for a long-night's game, but it certainly has the fun of one hour. And the computer opponent is very enjoyable and kind not to drive you to despair.

… I haven't been able to trace up the multiplayer part of it. At first, I thought it was my CCS64 (I thought there was a separate .prg file to allow me multiplayer, and CSS64 had done me problems before – great tool still!), but neither have I been able to anything on my old C64. Which means that you've got a one-hour's company in Ping-Pong, but, because of the lack of multiplayer…nothing more than that. Which is quite a shame, because Ping-Pong would have been able to provide good moments of fun in multiplayer.