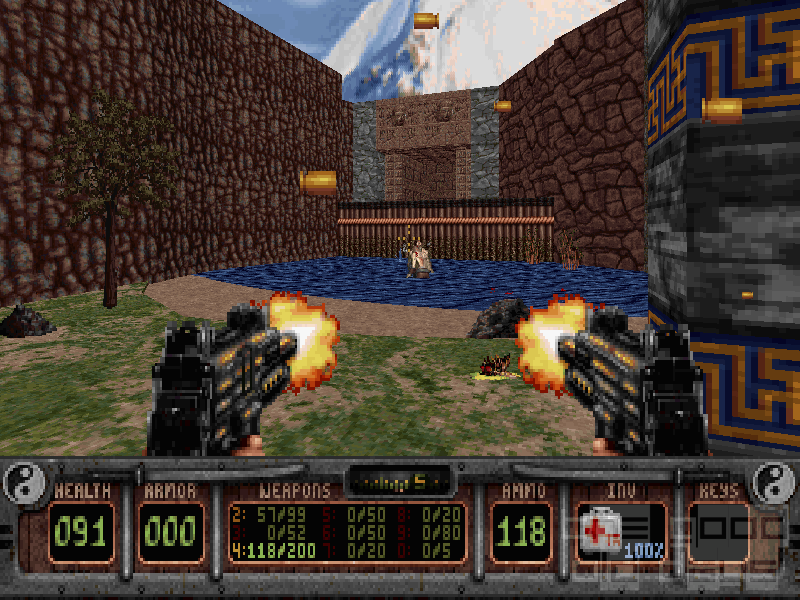 3D Realms, hot on heels of their recent success with Duke Nukem 3D a year earlier, released Shadow Warrior during the Spring of 1997. Shadow Warrior bears many resemblances with its predecessor Duke Nukem 3D, it shares the same but slightly improved build engine as well as sporting the adult themes that made Duke Nukem 3D so successful. In Shadow Warrior, you play as the protagonist Lo Wang as he battles against his former employer, now enemy, Master Zilla, leader of Zilla Enterprise. Lo Wang decides to quit his former group due to Master Zilla's nefarious plan to take over Japan using evil demons and monsters.

Shadow Warrior offers you a choice of 10 weapons to choose from, with each sporting alternate modes, you can use weapons ranging from depreciated demon heads, hearts, Katanas, Shurikens, and even a nuke. The game is composed of two episodes, a smaller 4-level set from the Shareware and a larger 18-level set that make up the registered version. Though, unfortunately for Shadow Warrior, the game was eclipsed graphically by Quake which was released in June 1996, a full year earlier, as well as being seen by many as just a Duke Nukem 3D knockoff.