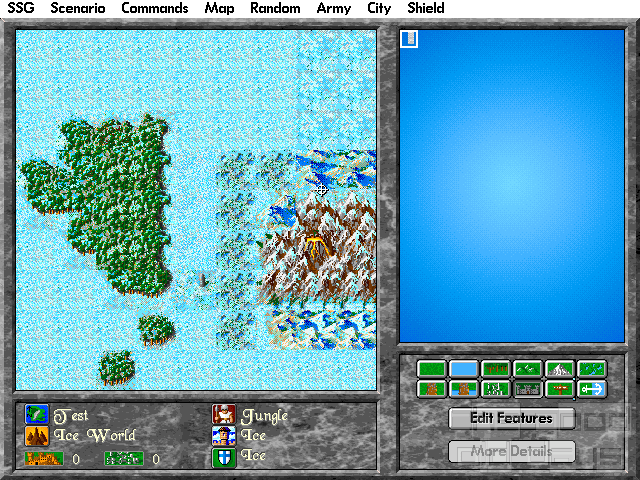 Warlords 2… not a huge jump from from the original. NetDanzr already identified the main differences in his review. While I don't agree with him concerning the ships (the manual handling of expensive ships as found in the original was way too fussy, in my opinion), I think he hit the nail on the head concerning the ability to 'buy' production. This feature did not make the game better, because it lowers the strategic importance of individual cities. However, you will use it, because the whole strategic model is of course built around it. Instead of going into further detail on those, this review will focus on what's new in Warlords 2 Deluxe.

Which is… preciously little considering it took SSG a whole two years. The main thing is that the scenario, unit and map editor which was previously sold separately has been included whereas the original release only had a semi-automated map generator. This editor is incredibly detailed, from drawing new unit sprites and defining their strength values as well as their special bonuses, to selecting between hundreds of terrain tiles, although in practical terms, there are 'only' roughly a dozen families which are further split into purely visual distinctions. Clearly, creating a really good map can take several hours – so it's a feature for the really die-hard fans.

There were many people who used it to a great extent, though, as this game release also proves. Roughly a hundred maps have been included and boy, are they varied in their scope, style and even tone! From classic high fantasy (like the original scenario) to science fiction, semi-historical conflicts or purely silly ones like “Babe Wars” or a conflict of transport moguls, you will find pretty much everything imaginable and more.

These scenarios aren't just a lot of fun, but they demonstrate once more how rock solid the Warlords concept and its abstract indicators of execution (artificial intelligence, rule set…) are. The foundation is simple enough, yet things can turn incredibly complex decisionmaking given the right initial scenario. This was already the case in the original Warlords as well as in the sequel. Now, this multitude of scenarios shows how far the very same foundation can be bent and still work perfectly – the resulting challenges and playing style can suddenly be quite different from one scenario to another. OK, it may not work perfectly in some scenarios, but it does in most, which is an impressive accomplishment already, and a testament to the design quality of the original.

So some scenarios don't really work, big deal. What's more interesting is the ones which do show limitations of the underlying concept, rules and engine. For instance, the World War 1 scenario is beautifully designed with a well-balanced map and nicely customized units. However, it does show that Warlords can never simulate crunching, static stand-offs (like the real historical conflict), but is rather tuned towards highly dynamic front line movements. Still, a fun scenario to play, even if it has little to do with history.

There are a couple of more minor tweaks. A play-by-email function has been added. An optional battle report makes playing large maps more comfortable. Oh, and the colour depth has been increased (which doesn't do anything for me). Other limitations have unfortunately remained untouched; most noticable the automatic re-routing of city production which is limited to only four senders per receiver.

So you may say this is basically just the old Warlords 2 with a lot of custom maps. That's not far from the truth. Nevertheless, I absolutely recommend this Deluxe release as the version to play – out of all Warlords games! Where the original is very limited with its single map, Warlords 2 made things a little more flexible and introduced some good new rules. Deluxe tweaks it just a little, but in undeniably positive ways. While some of the sequels are good games on their own right, they introduced maybe a little too much complexity, making them only appropriate for hardened veteran war gamers. This one is the game which the series is and should be remembered for!

Wandrell:
There is an improved version, Warlords 2 Deluxe, which changes many things, the more interesting part is that it adds a campaign creation tool that allows to even modify the graphics.
NetDanzr:
Feel free to share anything about Warlords II (1993) here!
[Reply] 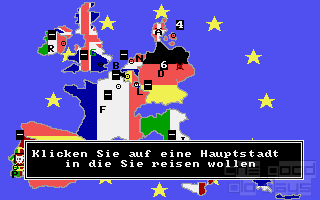