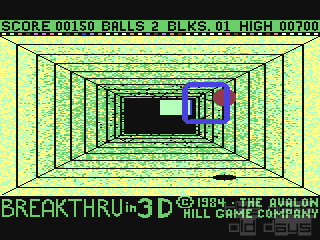 Pong...the game that ate my nights

. Indeed, I had a hard time playing PONG, I even tried to make my own. Some years ago, after playing Elite, I was even more curious to see a Pong game in 3D. After playing Doom, I thought at a first-person Pong.

And know what? I almost got it! I say 'almost' because Breakthru in 3D is, in fact, a kind of a 3d pong game. Of course, the comparation is a bit forced since the only thing the game has in common with Pong is the ball that bounces off the walls. The target of the game is to hit the walls in the back with a ball. You can control the way that the ball moves by moving your paddle up and down around the screen. The real inovation of the game is the fact that everything takes place in a pseudo-3d world. Indeed, although called 'in 3D' this is a pseudo-3d environment: it does not use polygons like Elite. But the effect is incredibly credible [lol] and I almost got fooled and wandered how this could be achieved.

Although out back in 1984, the game has a pretty remarcable sound. It isn't disturbing at all, and the effects reminded me about Hobbit. OK just a little bit, but the sfx IS good. And it sounds just as good on my P233 as it does on my old C64.

There are, however, a few things I found quite annoying. The first one of them is the fact that, although well-aimed, the game lacks the control you'd need. On my c64 the control is too insensible, on the emulator is too sensible and I often lost balls by miles. A remake with mouse support would be very nice. Besides that, the control has another problem: you can only move in four direction, and not in diagonal. But even with all these problems, the game is very good and extremely enjoyable, even if it's single-player only. Surely one to play. 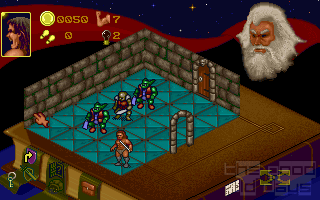