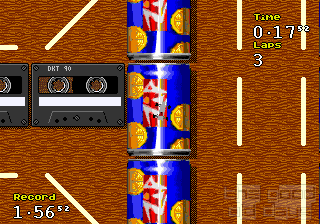 I have a confession to make. It may shock you. I've kept it a secret for all these years of reviewing games. Well, more or less – the truth may have shone through a couple of times. So I may as well get it out explicitely once and for all. This is it. Ready? I hate campaign modes! Phew… that actually felt pretty good. A deadening weight lifted off my shoulders. To illustrate with an obvious example: I never went beyond the first mission in The Settlers. Instead, I wasted countless hours playing random maps. What does this have to do with Micro Machines 2? Bear with me, I'm getting there. 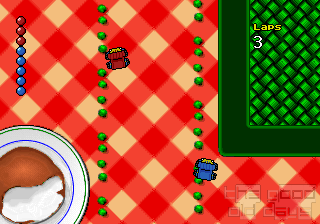 On the surface, there aren't any groundbreaking changes to be found in this game compared to its already excellent predecessor. The cartoony graphics have received only minor touches. The choice of toy vehicles to race competent computer-controlled or (highly preferable) other human drivers seems awfully familiar. All the acquired skills, like pushing your opponents off the table, will still work, and even a little more accurately, as some of the minor control and collision detection flaws of the first game have been weeded out. Head-to-Head mode, where only two cars drive against each other, scoring points by pulling ahead far enough to leave the shared screen, still shines as the most ingenious invention in the history of racing games, as it solves the genre's inherent problem of competing drivers hardly ever being close enough to each other to actually call it a direct competition.

Here is the thing, though. Micro Machines had you drive either in said Head-to-Head challenge or the more conventional four-car competition in a string of races which required you to win (or place at least second in the latter case) in order to progress. Meaning as soon as you lost one, you lost a credit. Once the credits ran out, you had to start over. Same beginner races again, in the same order. 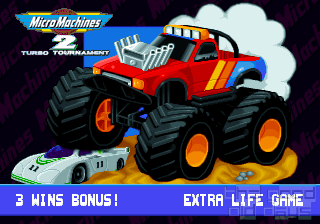 So what you had there was the classic campaign effect: sooner or later, you would hit a level which you would just hate. The designers would just throw in some crap dragster race on the toilet bowl, winning which would be a pure matter of luck. Just because of that, I have to go through all those trivial first courses again? Just to have another go and probably fail again? Because, you see, pure campaign mode also implies that you don't even have the luxury of training particular races outside the main competition. So the further you go, not only do the courses become more tricky inherently, but you're also much less prepared!

Micro Machines 2 does away with this. Any course can simply be selected; in any available challenge/competition mode. This even includes an amazing new one in which you can drive against yourself. Yes, you heard right. First time, you will simply drive against the clock. Next time you enter the same course, a shadow car – a recording of your previous best performance – will be there with you. No way to interact with it (i.e. no pushing & shoving), of course, but nevertheless another ingenious idea!

So this is it – the main thing which lifts this part far above its roots. Sweeping changes were unnecessary: just some small tweaks in the right places (oh, yes, and if you actually happen to like campaign modes, they are still there, don't worry). For me, the best racing game ever made! 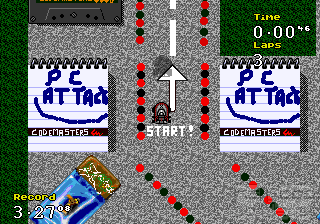 The Special Edition includes some fruits of the powerful editor which allows to simply click together new courses or even to go down into detail and paint your own tile sets and vehicles. A number of user-constructed courses are already included. These are lovingly presented with a preview map, name and location of the creator and many even have photo of that person.

While some of these courses are fun, many honestly mostly illustrate how hard it is to actually create a playable Micro Machines level. Preventing the cars from being caught somewhere and getting stuck cannot always be expected. Also, undoubtedly being veteran drivers themselves, many of these people who sent in their levels couldn't resist really nasty twists, turns, huge serial jumps, extreme speed and so on and so forth. It is certainly true that Micro Machines in general expects its players to learn its courses by heart, but it is much more prevalent in those user courses to fully rely on this.

Nevertheless – a nice addition to check out as well once you've maxed out your personal records on the official ones.