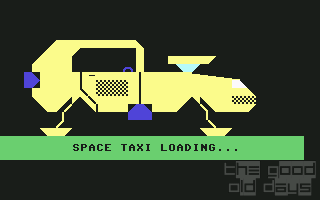 It’s 1984. USA and the USSR race each other to space. Arcades are plagued with games about starships, aliens, and space exploration. So the moment you booted Space Taxi on a Commodore 64, the brand new computer released just two years earlier, and saw the loading screen with an ordinary yellow cab with landing pads, you knew you were up to have some real fun with this tongue-in-cheek action/puzzle game by Muse.

As a cabbie, your task is to carry passengers safely between several landing-pads scattered around each of the 25 screens. Your yellow cab is controlled with four thrusters, which must be carefully applied in order to avoid crashing into the surroundings. The game features gravity and acceleration, so beware of gaining too much speed. Before picking or dropping a passenger, you need to deploy your landing gear and speed down your taxi. Failure to do any of the above will result in your cab being destroyed.

Of course, your mission would be easier if you could take as long as you wanted to maneuver your cab. But passengers impatiently tap their feet to the ground, and from the moment you pick them, the fare amount goes down by the second until you drop them off safely on the correct destination pad. Carry them quickly, on the other hand, and they’ll tip you. And there’s fuel to think about. Every moment you spend on the air consumes fuel, so in longer levels you’ll have to refuel along the way, by picking small fuel containers.

Game graphics are simple but effective, and while there is no in-game music, every level is introduced by short pieces, and achieving a hi-score rewards you with a longer catchy tune (I still whistle it once in a while, after all these years!). Another remarkable aspect of the game is its use of speech synthesis. Passengers yell “Hey taxi!” in different tones, politely command you to take them where they fancy (“Pad 1, please.”) and even complain when you take off before they have a chance to get in the cab. Programmer John F. Kutcher was wise enough to use just the necessary amount of speech to enhance the game without spoiling game play.

Space Taxi is a real classic released only on the Commodore 64, very well worth your time. If it looks too dated to you, I’d suggest you try Ugh!, a brilliant remake released for Amiga/DOS in 1992.

A few years ago i made an similar game. Only one level, but online highscore

http://www.freizeitagentur.de/game_spacetaxi/index.php
It was written in java. Java sucks but paying for development tools sucks even more and in those days there was no way to programm in Flash for free. And Alambik was an way to odd. 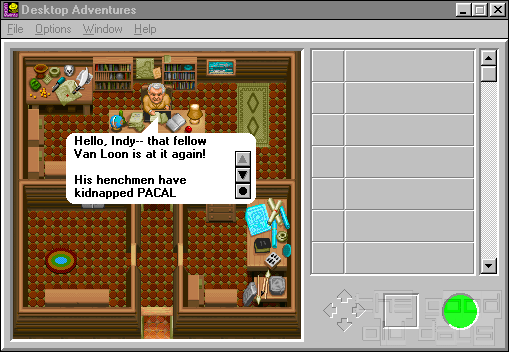