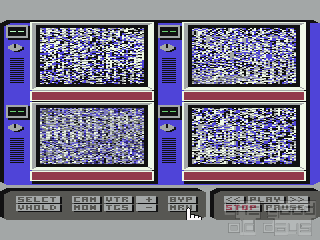 You know, before going into the REAL job of hacking, it would be a good idea to take a little bit of training. And, to avoid spending money on internet access, why not take yourself an offline hacking simulator?

Yeah you read well, Hacker is a hacking simulator, that allows you to take a look at how the masters are doing their job. After you've played Hacker, you can go to ***.*****.****.*****.edu and the straight to cia.gov

The storyline has you, the leading authority of computer security, playing the central role. CIA enlists you in its efforts against the terrorism. You will have to try and break into Alexandr Cherkazov's network and steal a copy of his plan to conquer the world. You are going to be helped by the CIA with a MRU (Mobile Remote Unit) that will, basically, do all the 'groundwork' for you.

When playing Hacker, you will find yourself doing some real 'hacking', but, although the game does have some parts of real hacking, a good part of it is transforming you in the co-ordinator of an action. You have to be carefull so that your MRU doesn't get discovered, and this gives the game a strong note of a spy story. It's not exactly a bad idea, but unfortunately you get the feeling of a cliche (try to count the books and films that treated this subject...and you'll see that most of them are crap). However, as soon as you begin playing the game, the thing is different.

The interface is generally excellent, but there are a few things that make it a bit rude to the windows-addicted user. First of all there is no mouse support (although there is a GUI and a mouse-like hand cursor). The second (and the most annoying) is that, because of the resolution, everything is written with letters which are so big that you can read them with your eyes wide shut. This makes the labels from the buttons to be abreviations, and you're gonna find it impossible to realise what any of them does. When you begin the game, there is a kind of a tutorial which should, theoretically, familiarize you with the system, but in fact it does the contrary.
Still, if you can pass the GUI, you are going to find this game very interesting.