The Warlock of Firetop Mountain
for ZX Spectrum
Also available for: Gamebook 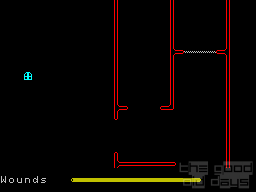 Formally based on the game book of the same name which launched a hugely successful series, you will usually read that this computer game bears no relation to its licenced material. This, in my view, is a very narrow view on gaming. For those of you who have played the book, what is it about really? You walk through a maze (literally in its last section), fighting monsters and collecting keys which, after defeating the titular warlock, you have to use to open a treasure chest containing vast riches. This, down to each letter, is the contents of this computer conversion as well!

Admittedly, the expectations may nevertheless have been… slightly different. Where the book handles everything in textual descriptions, multiple choice options and throwing dice to do battle, this game does away with these abstractions and simply handles things in a more direct, action-packed way. You move your character around freely (unrestricted by listed options) in a top-down view of the maze (spanning many screens), encounter monsters which you fight with arrows and sword, though the fights depend less on random throws, but rather reaction time. So what we have here is the same relation as between Atari Adventure and its inspiration, the original Colossal Cave Adventure. 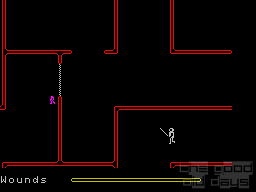 Though compared to Atari Adventure, the gameplay of Warlock is relatively limited. Whereas the former had some simple puzzles (e.g. find a ladder to cross a chasm), this one restricts itself to finding those keys which aren't even used until the very end and then automatically in one place (to open the chest). Other than that, the only obstacles are openable doors and the monsters. And talking about monsters, even the final confrontation with the warlock himself which should have been sort of a climax plays exactly like all the other encounters.

Its qualities at the time, namely graphics and animations, fail to impress today. The keyboard controls are rather awkward anyway – who puts keys for 'up' and 'down' next to one another, for example? Only the random regeneration of the dungeon at each game start (which works rather well, creating decent layouts) still counts for something. Simplistic games like this one definitely have it tough. In the maze genre, hardly anything has aged well and the signs of the time are written all over this one as well.