Prince of Persia
for PC (DOS) 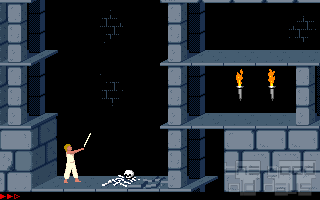 Somewhere in Arabian Nights-style Persia… You are a young lad who's been imprisoned in a dungeon by the wicked hand of Jaffar the Sorcerer who also happens to be the missing Sultan's unfaithful Grand Vizier, wishing covetously to take the ruler's place by marrying his unwilling daughter, who also happens to be your soulmate. Having thus disposed of you, lest you meddle with his evil plans for coup d'etat, he locks the princess in the castle tower and threatens to kill her if she keeps refusing him. It's up to you now to save the princess from impending doom, defeat Jaffar and finally bring peace to the kingdom of Persia. But first you need to help yourself out of this stinking place full of brutal traps, pitfalls and certain unfriendly figures, and all you got is… precisely 1 hour!

Now, don't say you didn't see this one coming. Must I tell you that PoP is a legendary 2D cinematic action platformer that rocked worldwide all throughout the 90s and has long become an immortal classic? Probably not, cause you know it all yourself, which is likely the only reason you have found your way in here. Who of us didn't own a mighty pile of 5.25“ floppy disks back in the good old days, one of which would definitely have this game? Who of us didn't play it hundreds of times over but would always lose and get bored with it in the end? And finally, who of us didn't suspect there was a secret way of saving your progress during the game and desperately press on all the buttons in the world just to get the long desired ”Game saved" message? Yes, yes, I totally hear you folks, but let's skip the sad part and get on with life, cause I believe I have a thing or two to tell you about the game.

The game was originally designed by Jordan Mechner for Apple II computer and published by Broderbund Software. It was ported to all popular computer/video game console platforms while strangely leaving out only ZX-Spectrum and Commodore 64. Later that was fixed, but those were more recent and unofficial releases. PoP became especially known for its unprecedented realism as to the main character's special parameters who is endowed with almost real human agility and certain athletic skills. Apparently, it's the first computer game in history which was made using the so-called rotoscoping technique, where live-action footage featuring real human models is used as the basis for animation. Incidentally, this was Mechner's second great hit after famous Karateka, only this time he used the above indicated method to create the game sprites, where one of the actors was his own brother David, who acted out most of the protagonist's movements excluding only the sword fight sequence which was derived from a 1938's Robin Hood movie episode.

It goes without saying that the graphics of the game were terrific for its own age and what particularly accentuated it was the timely implementation of VGA support. Apparently, 1989 is the year of mass VGA potency display which had to an extent hyped up the game production. But of course, it's only one aspect to its enormous success. What really astounded your average gamer is the amount of realism presented with respect to both the physics of the game and the variety of moves enabled. You can jump, crouch, run wild, walk prudently, climb, leap while either standing or running which defines the distance covered, grab onto ledges (when falling too), and of course use the sword masterfully which includes both swing and parry. Slipping, sliding, critical heights with varying degrees of damage – it's all taken care of. Another aspect to realism though are certain elements of gore, which were quite scarce in those days and thus in great demand. It seems that late 80s games somehow drastically went executioner style, which apparently was welcomed unanimously.

The environment itself is tad less spectacular. Even though, the background apparel tends to alter now and then, the overall pattern remains the same: platforms, slabs, pits, gates, torches and occasional bones which sometimes come alive. You can move in all 4 directions. There is nothing you collect in this game except the sword once on the 1st level and jars with healing potions, where you must watch out for bad ones that either kill you or turn the world upside-down (literally). There are no keys or other objects used in a similar fashion, all is mechanism driven. Some slabs you step on trigger to raise the gates, some to shut them. Some of them raise the gates SOMEWHERE, you have to locate where and often make it quick to slip through as those don't like to wait. And finally, there are secret passages which are uncovered by removing loose slabs which have to be tested either by stepping on them or jumping up and pushing the above situated ones, which also presents a certain danger since they tend to fall straight on your head taking away one bit of health and each time you have to move aside quickly.

Your enemies here are musketeer-like guards set in different locations (probably just other unfortunate victims of Jaffar's ill temper), skeletons (the only magic Jaffar can do methinks) and a variety of gorific traps like spikes sticking out of the floor, clanking metal jaws in some corridors which tend to cut you in half (very graphic) and some of the loose slabs which if not cautious enough either bang on your head or send you straight down a horrible pit with… spikes again! Or not. Well, guess what, you die in either case, simply different ways. Another hindrance in the game is a magic mirror which if passed through creates your impish double, the so-called doppelgänger, whose only job is to thwart your progress by either running ahead of you and drinking a “good” potion or stepping on some of the slabs which shut the gates… SOMEWHERE! “Musketeers” are fairly easy to combat once you've got the hang of it, although they tend to get more quick and resistant while raising their health counters just as you do. The skeletons are dealt with in the same fashion with only one bit of a difference: they can't be killed, only temporarily demontaged or pushed off the edge and sent to their permanent rest in some of the pits, which to your good luck are always nearby.

The sword fighting in the game is also quite natural, I must say, even though reduced to only one type of swing and parry. I don't recall any other games which offered as naturalistic fencing experience as PoP. A really bad example of it would be the Zorro game of 1995, which seemed like a cheap parody of PoP.

Needless to say perhaps, that your archenemies here are time and bad mapping skills. God, time! I HATE IT! Well, thankfully, it repays with infinite lives. You have technically no lives in this game, only tries which are restricted to the time given to complete it. The only problem is, you never know whether one hour is enough for you to complete… how many levels exactly?! It always bothered me as I would often get anxious and decide I'm already late since I'd already wasted so much time fooling around. Today I know there is a total of 12 levels, and… hey, I was right. I REALLY wouldn't have made it. One hour given to complete the ENTIRE game is really unsettling and it would be so much better if there were separate counters allocated for each single level with subsequent reset.

Well, good news finally: it IS possible to save your progress in this game, but only the chosen ones knew how exactly, that is, the legal owners of PoP since they probably also had the game manual. First off, it appears that you can save the game only when reached level 3. And the combination is… *drumroll*… Control+G! Now you know it, kids. Oh, and to restore is Control+L. There. Happy? No? Well, then kill yourself by pressing Control+A. Kidding. Matter of fact, the last provided combo is used in case you are lost and wish to start over or already too hardy and can still survive a critical fall down the pit where you are pretty much stuck. Provided there are no spikes, of course, which is quite fatal otherwise.

And to conclude thus. PoP is supposed to be the forefather of all 2D cinematic platformers and should be treated with due respect. It's a nice mix of Arabian Nights inspired tale with obviously a little bit of western admixture to it. It requires good mapping skills and cool nerves. Perhaps it lacks only a magic lamp with a genie in it, stashed somewhere in a secret chamber, which could grant you one and most important wish: to skip the game all the way to the final sequence and face Jaffar immediately. Or better yet just kill him altogether and see what happens next.

SavageThor:
My mom, dad and I played this for years when i was a kid. I only beat it a couple of times. They never did. I love those memories.
Mr Creosote:
I've never played it, either. Just sprang into my mind when I read the thing about realistic swordfighting, as I remember the reviews at the time being quite enthusiastic in this respect.
Moebius:
Never really played it nor remember the name, but just watched a bit of it on youtube. Well, what can i say... the physics there seem to suffer somewhat. Surely, POP fight scenes only looked good for its own time, but that one... can't say it's any different from many other ones i've seen whose names i never properly register

Mr Creosote:
Regarding realistic sword combat in computer games, what do you think of Die by the Sword?
[Reply] 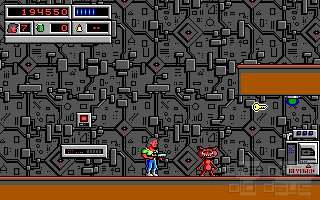