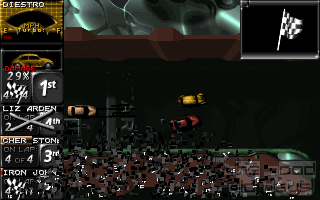 It may seem strange at first, but having a machine gun mounted on your car makes perfect sense. After all, what better way to keep an overtaking car from getting ahead? How about mines for those tailing you too closely? This is no ordinary competition, you know. And if you want to make it all the way to the top, you must be willing to drive into some gray territory.

You start with a VW Beetle and $500 dollars to prop it up. Each round you get to pick from three possible circuits with increasing money prizes according to their difficulty. The game is a top-down racer, with the addition of a pseudo-3D effect which makes elevated objects change perspective as you move around. Besides steering your car along the tracks, you have a front machine gun and a limited supply of mines and ammunition at your disposal, as well as rocket fuel to give your car an extra boost. Though you can’t replenish your mines, you’ll be able to pick both ammo and rocket fuel along the way. Other collectible items include cash and repairs, but beware of hallucinogenic mushrooms or your visuals will become distorted for a few seconds!

After each race you enter the shop, where besides making the necessary repairs to any damage sustained, you can upgrade your tires, engine and armor. Once you’ve raised enough money, you will be able to replace your car with a more powerful one, tough it’ll be a no-frills version so you’ll have to start from scratch with the upgrades. There’s also the underground market, where you can get mines, spikes (to increase the damage produced by ramming against other cars) and rocket fuel. Or even pay a visit to the loan shark, if you’re desperate enough.

Every once in a while, some suspicious looking guy will show up asking for a small favor in exchange for some bonus money. They usually consist in either carrying some pills to the finish line, which means you’ll have to win the race to fulfill your part, or making sure one of the other racers doesn’t get to the finishing line. Failing to do your part means not only you won’t get paid but also you’ll be making enemies. All these strategic elements spice up the game without taking away its purely arcade aspect.

But where Death Rally really shines is in its multiplayer mode. True, you need a computer for each human player, yet you can have a head-to-head competition through a serial link, or up to four players can race simultaneously provided you have an IPX/SPX-based network (or use DosBox). This feature made it quite popular among IT-workers, to their employers’ dismay. There’s nothing like challenging real, human, emotional players and feel them react to their car getting on fire after driving over a mine. All is fair in love, war… and Death Rally. 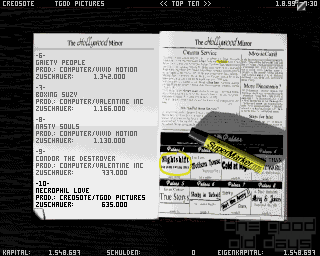