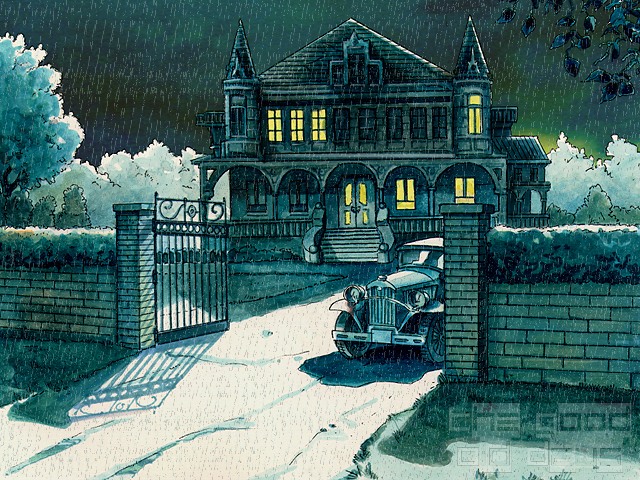 I, nephew of a rich uncle who lives in Berlin close to the Brandenburg Gate, set out in the chaos of the first world war to look all over the world for his stolen pictures. No, this isn't an Adventure game… neither a role-playing game or anything similar, but rather a solid economic simulation

Yes, the plot isn't so bad and it would fit perfectly into another genre…

This game published in 1997 is a remake of the original which had been published in 1987 for the C64 and the Amstrad CPC and in 1988 for the Amiga, Atari ST and the PC. Back then, ratings differed quite a bit, from good to adequate. All the more reason to take a closer look how this remake fares.

Now, to start the game off, we are invited to our uncle's villa. We? Yes, because only one of his four nieces and nephews will receive his fortune; the one who brings back most of the pictures which have been stolen in a robbery. To achieve that, not only arts expertise will be necessary (to distinguish forgeries from the real ones), but also the skills of a tradesman.

We four have to prove ourselves as plantation owners first. We can travel to some selected cities with the train or by boat in order to build up a new plantation there. Per city, we can grow two out of four basic goods (tea, tobacco, coffee and cocoa). Ankara is the only exception, because we can also grow hemp. Well, with some launch capital we begin our trip to a city to start cropping. Of course, we have to consider that not everything grows everywhere, according to climate. Either we just try it out or use the help file

. So we buy some acres of land, maybe some sheds to increase motivation, a guard tower to keep our cousins from ambushing us, and maybe place one or another water pump to fight droughts. With some luck, our workers will hit an oil well which we can exploit with a derrick to make some money on the side.

Once we have built 1 or 2 plantations, all we can do is wait. From time to time, we will receive an offer for a future delivery at the markets of New York or London. This offer will usually be above the current sales price and is therefore especially profitable. To sell things, only these two markets will be available. So we have to consider whether we'd like to send our goods to New York or London to sell them. Current prices are always accessible and there is a hotel in every city where we can look up current statistics, when our goods will arrive and how much is stored where. In addition, there is no way to store more than 2000 units. Also, you can't buy more depots. Either you send your goods out or work will be stopped until there is room again.

One way to earn money is therefore growing and selling the four trading goods. But on top of that, the game also contains some additional nice functions. For example, we have the option of placing our money at the horses, buy shares of four logistic companies (whose value also depends on us, because the more goods we ship with Duala or Star-Line, the more money they make and their stock price goes up) and also junk bonds which are highly speculative. Oh yes, and we can also put some cheap copies into circulation to fill our money sack. Paris always has a painter ready for that

Once we've done it and and generated decent profits, we can procure the help of some gangsters in Chicago who will annoy our enemies – uh, I mean our dear cousins. For our own protection, we can hire a bodyguard at the local detective agency. Though it isn't the goal to get rich, but rather to retrieve our uncle's pictures. Well, so we have to visit one auction after another to purchase a few originals while maintaining the flow of our goods to the markets. Sounds easy and in the end, it is, because we don't have to be present personally every time, but we can always contract an agent in the western cities who will bid for us until a set limit, though without minding original or forgery. At some point, it won't matter anymore anyway whether we buy a forgery or an original. Assuming we are well-behaved and mind our plantations, we will always have a lot of money in our pocket and on our accounts. If we get an original (or a forgery, because that will also be accepted until the original is produced), off to our uncle, present him with the picture and then we can amass more money. Some pictures will actually cost millions. For the standards of the time, this was a lot of money and the relatives never sleep; they, too, want to catch some pictures.

The graphics are great, beautiful pictures… TOP for 1997. The sound is entertaining and the controls are very comfortable and easy to use. The multiplayer mode suitable for up to three friends is also ok and well implemented.

Conclusion: Unfortunately, after a very entertaining and hectical beginning, the game will slow down significantly towards the end. Still, a GREAT idea, great work and absolutely worthwhile!