Tunnels of Armageddon
for PC 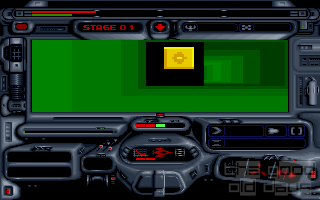 When I first saw this title, it had two things going for it: a nice, retro-looking box cover, and it was cheap. So I did what our parents have all told us to never do: I bought it based upon these facts alone.

For me, a big mistake.

But first, let me get to the going points:

Tunnels of Armageddon is a futuristic racing game which has enemies to shoot and items to collect. It's sports well-drawn EGA/VGA graphics, and supports both Adlib and Sound Blaster. With 20 levels of play, it has a good replay factor, which is always important with racing-centric titles. The title intro screen is quite nice, as is the cockpit view during in-game play. The game is a fast-moving, polygonal based, pseudo-3d racing game, where players race through tunnels, shooting enemies and collecting health and power-up items, and most reviews I've seen view the game quite favorably.

Well… not for me, unfortunately. I have a hard time differentiating between similar colors. When there is alot of similarly-shaded coloring going on, it takes my eyes a moment to recognize things. Movement helps. Unfortunately for me, this game is fast-paced enough that by the time I can discern whether those “far away” items are walls or passageways, they're right on top of me, making it really difficult to maneuver my ship.

To further compound this issue, the keyboard controls are a bit different. Press and hold down the key for left, and your ship veers very far left. Tap it, and it only goes slightly left. This takes some getting used to, which wouldn't normally be a big deal, but coupled with my shortcomings above, and it really ruined the experience for me. Which is sad. I really wanted to like this game. I still do. But unfortunately, it gets classified into the same category as Descent, Duke3D, and Doom as games that I really can't get into no matter how much I want to… I just can't tell what the heck's going on!

With all of that said, my personal experience shouldn't deter you from trying out this game. Most of the online reviews I've seen for Tunnels of Armageddon view the game favorably, and when I've shared it in the past, other gamers have enjoyed it.