The Citadel of Chaos
for C64
Also available for: Gamebook 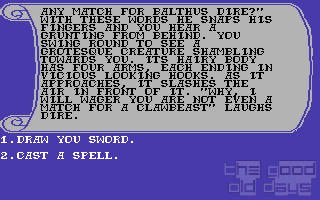 The Warlock of Firetop Mountain, in spite of its playability, was criticised for its rather free-form interpretation of the source material the underlying book had provided. Now the computer port of the second book, The Citadel of Chaos goes right to the opposite extreme: there could hardly be a closer way of adapting the game.

Meaning: as far as my opinion about the contents of the book, the plot, the originality of the encounters, the decision variety and the quality of the writing go, everything I said in the review of the book is equally valid. The quest to defeat the evil magician Balthus Dire attempts to recreate the rules and mechanics of the book exactly by the letter. So you get all the original text of the sections intact and at the end of each, you are presented with the original choices. Apart from the cases where you aren't. This review will focus on the purely mechanical differences and hopefully provide some feeling of what this means for you as a player.

Multiple choice mechanics triggered using numbered options – it's simple as that. The first major annoyance to strike you right in the face is how slowly the text appears on the screen, however. A longer paragraph, like the opening one, can literally take several minutes to be slowly typed out! The quick text option, on the other hand, harbours the inherent risk of missing something, because the text doesn't stop to scroll. So text display is fundamentally problematic, in a game which is all about reading text. Not a good first impression.

Apart from that, the devil's in the detail as usual. First of all, the magic system plays a major role in the book. Unlike the book, this computer game doesn't actually propose explicit choices for spells to try in specific situations; it just suggests to try a spell. The player then needs to select it freely from all available ones, increasing the probability of failure immensely. Often, the game will not even give a reason why a spell won't work – it's probably just that it wasn't in the book, so it's not possible on the C64.

A similar irritation happens with usable objects. Sometimes, the game will ask the player whether to use individual items from her inventory. Sometimes, this list is filtered to only list the available items in this computer conversion. Sometimes, it isn't. Meaning you can choose to use an item which you don't have (as in the book), but then, the game will check its availability anyway and have the action fail silently (without an error message).

Third, there are some indications that the computer game may have been made based on an earlier (pre-publication) version of the book. In at least one case, there is an extra option presented to the player. Worse, essential options and items don't appear in the places they are supposed to (and also not anywhere else). This doesn't make the game unfinishable, but the only remaining path robs the player of some of the better situations of the regular walkthrough. Maybe it's also just incredibly buggy.

Putting purely mechanical and technical aspects aside, the major question for any such conversion is, of course, its 'feeling'. Warlock was removed concerning the mechanics, but its feeling of being in a maze-like dungeon and facing monsters to find treasure wasn't all that bad. Citadel, in spite of its attempts to be as straight as a conversion can be, misses maybe the most important thing which makes playing the book so adventurous: the ability to cheat.

You see, when you're playing such a book, you will always have several fingers strategically placed at certain sections which you've passed earlier, but where you're not sure you made the right choice. That way, you can 'rewind', i.e. go back to an earlier 'save state'. Don't let anyone tell you they never did this. It is actually part of the fun.

There are other aspects which weaken the atmosphere. Of course, the simplistic computer graphics of the time aren't able to hold a candle to the often gorgeous illustrations of the books. Some portraits make creatures which are supposed to be frightening and hideous look rather silly, or even cute and cuddly. Watching the computer throwing the dice to determine fights can also get rather dull, compared to the thrill of doing it oneself. And so on and so forth.

So in the end, discounting the bugginess of the game as well as some questionable technical choices concerning text display, the Sword of Damocles of such a game is really the big question what its added value is compared to just flipping through the book. In these days of mobile electronic devices, you may say you always have your portable C64 with you anyway. Though then, you could also just have a PDF version of the book on the same device. Really, the pitfall of this one is its undistinguished nature. Nothing sets it apart (in a positive way) from its source material. You could say it's too faithful, not accounting for the inherent differences of the medium. Though if you really feel you need a contemporary computer conversion of the book, well, you could do worse…

Herr M.:
Feel free to share anything about The Citadel of Chaos (1983) here!
[Reply] 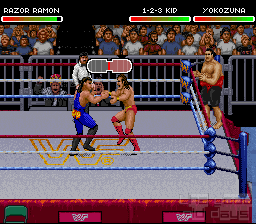