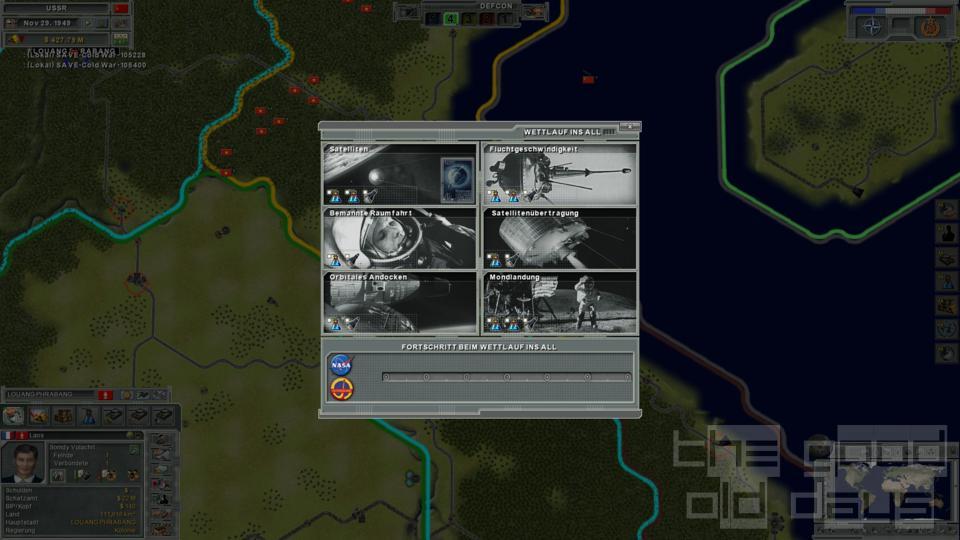 Supreme Ruler: Cold War – the title doesn't tell a lot; though if I now mention that you can wage the 3rd World War with nuclear weapons and that one of the goals is conquering and smashing all communist countries of the world, it should get quite interesting, shouldn't it?

Paradox Interactive is already known for designing obscure, very complex strategy games. Supreme Ruler: Cold War is the seventh part of this series. Supreme Ruler 2010 and 2020 were some of the 'shorter' predecessors and the seminal grandfather was Supreme Ruler, published in 1982 on the Tandy TRS-80. Even back then, this was a fairly unknown, but highly ambitious hardcore strategy game. So we can expect quite a bit and this game could also be called 'hardcore'.

Alright, the first step is maybe one of the simplest and apart from picking a scenario, a campaign or multiplayer, we can also build our own scenarios. In general, I lean towards playing campaigns and launching such a game is fairly easy (just 2 clicks

). You start a campaign by choosing a side… good or evil… Russia or United States… Both powers have their unique characteristics based on their ideology. The Americans boast a strong economy and they are more respected in the world. The Russians have lower costs for work and military and their resources are vast. After selecting the Americans, we start the campaign in 1949, shortly after the beginning of the Vietnam war and at the time when the Russians blocked West Berlin off from the rest of the world.

Jumping straight into the campaign turns out to be a fatally wrong decision, however, because after finding the switch on the top left to unpause the game, I'm faced with the question: 'What now?' Since in Vietnam, one of our allies is engaged in a war with the Vietcong, let's support the French prematurely in order to avoid being sucked into the historically correct catastrophe. Following the 'Obama paradigm' of not sending ground troops, I decide to only perform air strikes. Somehow works, but then again maybe not, because my supplies are shot down over China. Okay, maybe we should build some aircraft carriers? Or maybe we should first research some new designs… I cancel the first steps after 90 minutes and look for the manual which (in spite of sporting 75 pages) does describe a lot, but doesn't explain it really. (Why don't they just put in a tutorial?!?!?!?) Oh well, learning by doing, off we go, let's try to apply the newfound knowledge.

Second attempt – in order to understand the waging of war at least somehow, I'm trying to revisit the Vietnam war in its own little scenario by taking the Vietcong side… mission: conquer Hanoi. I simply draw all units from all sides towards Hanoi, conquer it after a couple of days and I've won. Okay, the manual said something about a secretary of war… somehow, someway you can switch this on or off as you like. Provided you find the option in the menu (or you think you found it). Although the manual says we can concentrate on the big picture and just let our secretaries do the real work based on priorities, I didn't really get what they're doing, so I'm just hoping I found the right button to actually activate it

So on to the next attempt:

Round 3 works great, I simply destroy the French troops by staring at the screen and watching my secretary of war move the units around. After concluding this scenario, I have now understood and learned about roughly 15 of the 28,134 possible actions and settings, so I'm highly motivated…

As our esteemed reader may slowly begin to understand, getting into this game is rather opaque and so hard that you will need a big amount of staying power to even start again a fourth time. Well, unfortunately, I'm not one to give up this easily, so this review will continue into round 4:

In round 1, we played the Americans, so let's try Russia this time. As far as I understood, the secretaries will only do what is absolutely necessary and whether they act sensibly at war, I cannot judge. Because there is no war, I'm not playing around with the settings, but rather try to act towards reaching the campaign goals… which are these… yes, that is what I asked myself and look and see, the manual even has an answer somewhere… oh, no, it's not really explicit… We should choose our own goal… I can think of one: the 'quit' button. No, that would be too easy. Those who can read between the lines and study the manual intensively, will find 2 possible goals on page 65:
a) As leader of the NATO or the Warsaw Pact, subvert the other alliance and everybody else
b) Get the upper hand the military way by conquering other countries

Another step closer, so I decide for a). For a start, I'll try to get Finland back into my sphere of influence. That actually works out after sending money… wow, that's easy. Well, then let's sign a non-aggression pact… no, that doesn't work, and the Fins also don't want to sign any of the other 10 contracts… why not? The manual only says we should trade, because this will improve relations, so I'm buying everything I can and indeed, public opinion in Finland increases to the maximum… still, their government doesn't want to sign some meaningless contract. OK, so what about an alliance with the Vietcong? They're at war with Laos, France and South Vietnam, so an alliance with Russia may be great for them and maybe it would enable me to try for option b). However, it also doesn't work to get the Vietcong into an alliance, although the gauge for that is lit bright green.

Building 'complexes' goes without any problems. A complex can contain up to six individual installations producing different kinds of goods (uranium, farming (food?), ore, manufactured goods etc.). Goods are required for trading, building and producing. No units without military supplies. No military supplies without power and no power without coal.

Then there is research… easy in Civilization – much more complex here, because we have to build labs to perform any research and the research rate is directly linked to our social expenses, or rather the spending on education, because this increases the quota of alphabetisation… is there anyone still reading? My head is spinning just from writing, because I'm trying to explain all the assembled insights and connections and get them across.

Oh well, let's try our luck once more and start from scratch in the role of the Americans. This time around, I stumble across four buttons right at the beginning to set some things and voilà, I can CHOOSE between MANY goals, adjust the difficulty level etc. Seems there are one or two pages missing in the manual… oh well, let's just begin. Thanks to our secretary, we begin research automatically. I myself add a couple of more 'researches' which leads to more slots (research centres) being required than available and my wishes being queued until further notice, but anyway. Military units and complexes, we still have to build ourselves. Although we could also assign a secretary to do this, I have the feeling of this getting out of hand and my financial reserves disappearing into thin air. So we build a couple of mines and power plants in order to increase our own production. Then we order buying all supplies currently on the market, because they are cheaper than our own production costs. Because we spend more than we produce in almost all areas, this seems advisable. By buying and storing the surplus of other nations, we are building up some reserves. How far we can store power, I cannot anticipate… but buying a large amount once works much better than small amount every day to fill gaps of about 40 or 80 days (until the construction of a new power plant).

To those of you who are still with me, let me tell you that this game actually fascinated me, but getting into it is so hard and its functions are so varied, complex and multi-faceted that they seem completely non-transparent, so that I always have the feeling of having missed something which may have been important. I would like to apologize for this long review, but whoever is still reading should probably take a look at the game, because getting into the game is probably as long-winded as this review. Unfortunately. Idea and execution may be top notch, but if you have somebody explain very badly how their game works, I take off 1 or 2 points already. Paradox likes to produce according to the paradigm 'sink or swim', which really annoys me!

You see, this long-winded introduction into the game takes at least 15-25 hours! This is just enough to cover the basics and how to handle them. Even then, you will only really have learned the most important aspects and still have many details left to try out. By now, I can somehow play the Americans, but I still haven't understood the whole game really, and that is really a pity, because I'm still not sure whether what I'm doing is right (the manual, for example, says the space race is of major importance, but of course, it doesn't explain what advantage it will bring to actually win it?!?!?!?). Everybody has to figure it out for themselves or maybe there will be a new manual or an update introducing a tutorial… until then, all there is left is trying out to get as many countries on your side as possible or to conquer the world

. Oh, yes, and by the way, I have found the red button to launch the nuclear missiles, but I HAVEN'T tested it…

The graphics are fairly attractive and with the help of 150 zoom levels you can recognise every little detail. Zoom 1 would be the whole world, where you can't really see a lot and zoom 150 is The Bridge on the River Kwai (a very recommendable film

). Music and sound are supposed to be there somehow. Occasionally, I have heard an explosion…

Conclusion: worth buying from a bargin bin just to try, but otherwise, it is only for die-hard strategy fanatics. 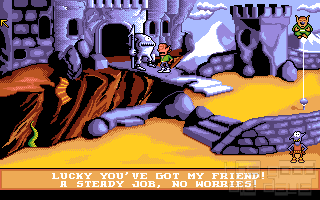