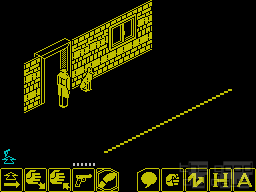 New York. Late afternoon. You were relaxing in your office muffled in clouds of tranquilizing smoke issuing from your cigar, your feet resting on that tiny spot of your desk luckily unoccupied by exorbitant piles of inconclusive evidence and other 3rd rate material you would never tend to, and enjoying in quiet solitary bliss what little was left of your coffee break... suddenly the blower went insane disrupting your sweet oblivion. “Detective X speaking”, “X, we have received information regarding an audio tape finally proving the local mobster guilty of smuggling, blackmail and 1st degree murder. Hit the road on the double and locate the girl calling us - she knows where the tape is stashed and will take you to the mob's headquarters. Be careful though, the place is heavily guarded!”, “Roger”. Ok, bub, time to slip into your trenchcoat and show us some good MOVIE. Lights, Camera, Action!

A moment of truth: I made that whole thing up about the tape containing any evidence against the mafia boss and the girl providing intelligence. None of these details were in the game's descriptive notes, although the tape, boss and the girl are all present here and I've simply connected all the dots forming a coherent story once again undelivered by the game authors. Yes, this is another isometric action/adventure game, and this time featuring a private eye infiltrating a ganster den. The game was programmed by Dusko Dimitrijevic (codename Duke), designed by F. David Thorpe and published by Imagine Software in 1986. There were no other ports except CPC, which traditionally offers little advantage save for a few more colours applied to different parts of the game to defy Spectrum's monochrome palette. The name MOVIE was apparently inspired by 40-50's mystery/crime/film-noir cinema, and another way it showcases the very intended realism proposed by the high-detailed scenery and smooth animation, which at the time of its release were quite excellent, albeit monochrome.

The game environment is a vast maze-like complex comprised of about 200 screens. The rooms are decorated gracefuly and hold numerous objects such as plants, furniture, a variety of partly animated devices most of which are inoperable and static though, and as such are merely props, which is a commonplace ruse in Spectrum games. Your character besides walking can punch, shoot a gun (which is yet to be found), pick up/use various other items, talk to people and sometimes even non-human lifeforms (talk often, you never know who or what may respond back to you!). The utterances are displayed in a comic speech bubble style. Below the main playing screen there is an icon panel akin to that of 2D action games Barbarian and Obliterator (Melbourne House, 1988), which is used to execute the actions listed above. Incidentally, MOVIE is the only Spectrum game I'm aware of which combines both isometric perspective and icon system. In terms of graphics and gameplay MOVIE can be placed in one row with other no less victorious titles such as, say, Fairlight, Inside Outing, Great Escape and Where Time Stood Still.

Here you have mobs attacking you either with bare hands (takes time to kill) or by firing a gun (immediate death), and also harmless random figures who occasionaly give you directions (sometimes misleading) and supply you with passwords to unblock some of the passages in order to get through (the knight armours blocking those are deadly if contacted). You spend most of your time looking for passwords and the right path while avoiding/combating gangsters on your way which often mix with informants making it hard to tell who is who. Some of the passwords can be guessed but may be very difficult to obtain otherwise. Example: would it ever cross your mind that in order to get a password from someone you may need to repeat your request several times over which technically amounts to extortion, yet there is not even a slight indication that you're getting anywhere as the guy keeps blurting out same and the same responses which in many other instances would suggest you're simply wasting your precious time? Yes, once again, Spectrum presents us with some utter inscrutable riddles, which is why I love it so much. I'd coin the phenomenon “It's so simple it's impossible”. There are also other beings here which are non-character supplements to the game such as parrots giving you small tips (if lucky), dogs mostly static but if bouncing happily present a certain threat to the player (say what?) plus a few other nondescript, but often dangerous elements.

Now let's observe some of the rather harsh challenges of the game and certain discomforting features which I personally see as tangible deficiencies. First off, there are NO lives in this game or energy bars, once killed you can only restart the game. There is NO way of saving your progress, unless using emulator's state saving (snapshot) feature. The game is TOO slow, and if you first liked this dude's slack pace later it will sure become a major annoyance, and there is no way of fixing it unless, again, you artificially speed up the game in the emulator. The icon panel, however attractive at first glance, is probably the most irksome thing in this game. Not only every time you activate it it sways back and forth and gives you hard time, it also doesn't put the game on hold, so while you're tinkering with the icons someone may punch you or what's worse take a shot at you and bye-bye. Not very cool. Real-time is good alright, but not to the point of sheer absurdity. I guess the only relief here is no time limit, for this game would be a total failure otherwise. 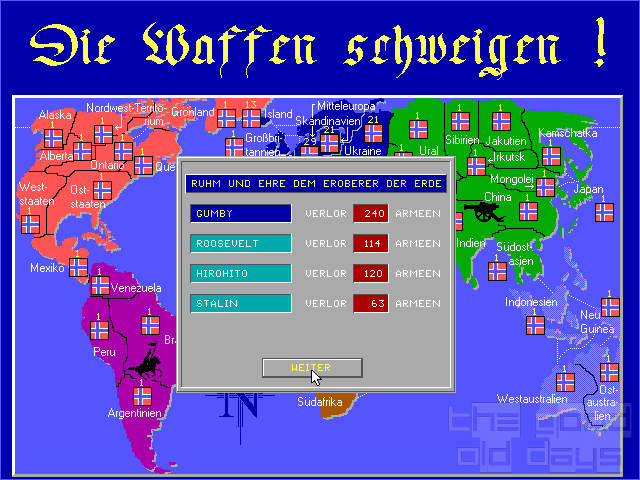