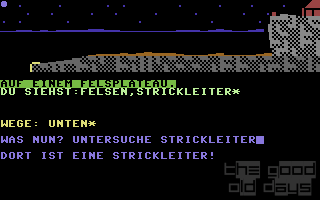 At last, your search could come to an end. The ancient relic, the last piece of the jigsaw puzzle which you and your colleague have been trying to decypher for years, should be right there in this cave. Go in, get it and get out again. Should be a piece of cake. If there weren't unspeakable horrors also lurking inside. Not just that, the cave is also extremely spacious, containing not just several rooms, a chapel and an underground lake, but even a number of prison cells! But alright, some space to explore is what we're looking for in such a game anyway, isn't it?

Compared to commercial games of the era which this one is trying to imitate, Die Höhle is actually still fairly small. This also makes the puzzles relatively easy to figure out. Not because of their nature – they revolve around the usual activities of finding hidden objects and performing basic mechanical tasks, like opening locked containers or bridging impassable ways – but simply because search space is rather limited.

The parser is based on a simple VERB NOUN grammar and its vocabulary is quite limited, as expected. This actually often makes things easier, too, as not too many things need to be tried out. Two or three puzzles suffer from sudden guess-the-uncommon-verb issues, however.

The Lovecraftian plot remains at a basic level. This is appropriate, in line with many the author's shorter stories where also hardly anything is ever explained or even coherently developed. Die Höhle makes a good attempt at using clichéd, but effective set pieces to create its atmosphere, i.e. apply implicit storytelling.

However, what really hinders its success at this is the very dry use of language. Where Lovecraft himself reveled in words and stylistic devices, this game always stays in a very brief matter-of-fact tone – even in climactic situations, like the encounter with the monster. Misplaced modern-day expressions and grammatrical mistakes (even in the parser vocabulary!) don't improve matters.

In the end, evaluating this game is really a question of expectations. It is obviously geared towards a 'retro' audience who wishes to recreate some of the spirit of a genre which, at the time, was born out of technical restrictions. Clearly, a modern-day development system for text adventures could enable the creation of a much better game by objective standards. But to some people, limitation can be a virtue; the game is simple by design and therefore very well playable without major effort. It's even actually much fairer than its historic counterparts with respect to instant death scenes. Certainly, it is intended to make its players smile fondly and with a semi-ironic edge rather than having actual shivers run down their spines. With all that in mind, it does rather alright.

The strategy to publish it in a physical tape format complete with printed cover and instructions is appropriate given such a background. Nevertheless, you have to think whether it is really worth paying for. Apart from the curiosity factor of said physical format and the fuzzy, warm feeling to see in on the shelf, it has unfortunately little going for it. The game is easily surpassed by a large amount of freely available ones. So in the end, the only question to ask is really: why, of all, this one?

P.S. This game was available as freeware for some time directly from its maker, but under the condition that it would not be passed on or offered anywhere else. Since the old download has disappeared by now, we're classifying it as commercial again.

Mr Creosote:
Given the low quality of the language in the original version (as mentioned in the review), I wouldn't expect too much

Moebius:
Originally posted by Mr Creosote at 02:35 on December 5th, 2015:
I don't know, I don't have the English version available.

Mr Creosote:
I don't know, I don't have the English version available.
Moebius:
Originally posted by Mr Creosote at 00:14 on December 5th, 2015:
Apart from the fact that there is an English version (called The Cave), why wouldn't it be interesting for our international visitors to take a peek into what is out there? I find it fascinating the other way around.

Ah.. i didn't pay attention to the alternative title. So you're saying the german version is much different from it?

Mr Creosote:
Apart from the fact that there is an English version (called The Cave), why wouldn't it be interesting for our international visitors to take a peek into what is out there? I find it fascinating the other way around.
Moebius:
A little strange that you wrote an english review on a german game. I mean, there's nothing wrong with it of course, but i doubt any of the english speakers would ever try it out or even care much about something they would never understand 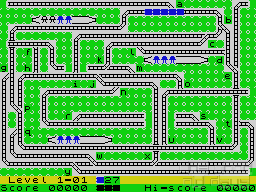