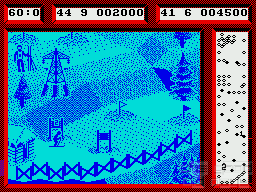 The skis are calling! You are to pack your gear and head straight to alpine heights to face new challenges. Ah, what could be better than a good once-a-year slalom-style slide down the snowy mountain slope! Now, all the contestants take your positions please and watch your step down there, we don't want any accidents! On your marks… get set… GO!

Ok, I'm not really a big fan of skiing or sports in general. Not unless in a computer game! Typically though I would ignore most of those sports/olympics related games, or would never invest much time in them as I would soon get pretty bored, but I've never played anything as entertaining and addictive as this only Spectrum game here, whose seemingly generic appearance turns out a little deceptive.

The game is done in 3D isometric fashion with upside down scrolling. The graphics count as high-detailed as per Spectrum standards but as usual compensate with monochrome palette and diminutive objects. The controls may appear tricky at first, but it only takes getting used to. You can turn around smoothly to adjust precise direction, thrust and free-ride manually, which is a lot more fun than just continuous downward drift with fixed velocity.

As anticipated, your task here is to slide downhill while skirting various obstacles, going through the gates which is crucial in slalom-style skiing, and if possible reach the finish line ahead of your opponent. You aren't disqualified if you don't, but it's definitely more agreeable. There are 7 levels here. Each following level presents increased amount of challenge – the tracks get more “trippy” and the obstacles multiply. You can play against the computer or another human player.

The chief obstacles here are time and gradual screen autoscrolling independent of your personal progress or your opponents' for that matter, which means you must stay within the visible frame, keep up with the race and avoid least delays on your part often caused by crash from collision or sloppy move which temporarily disables you. Failed to do so your skier may get out of range and your only hope to extricate yourself is to navigate semi-blindfold using the map on the right, where you and your opponent are seen as numbers 1 and 2. I don't know whether it's just a limitation as opposed to split screen commonly featured in numerous like games or once again Spectrum's own original conception. In either case, I like it exactly the way it is, as it sure contributes to fun, thrill and fair complexity.

Herr M.:
Originally posted by Mr Creosote at 00:27 on December 27th, 2015:
A lot of things only became clear and alive in our heads through context. This game is about skiing, so it must be skis.

Interesting thought! Judging by the game's graphics you need a lot of context. They do have their charm though.

As for the rifle: You would just have to imagine being James Bond and those shooting skies could work.

I think back in those days i would also believe there is some secret way of shooting skis unless the game clearly suggested it's actually a rifle...

Mr Creosote:
It is the reality of games from that time, isn't it? A lot of things only became clear and alive in our heads through context. This game is about skiing, so it must be skis.

I knew it probably doesn't look very convincing, but other than that nothing else crossed my mind

Mr Creosote:
Also, when I first saw the sprite you put in the news, I thought why is there a guy holding a rifle

Moebius:
Nope, never. But i am familiar with the title. Looks pretty cool

Mr Creosote:
Nice one! Have you played Ski or Die? Looks quite similar.
[Reply] 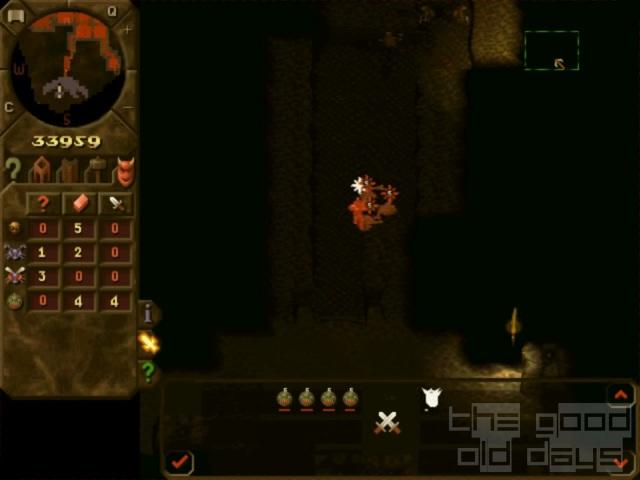