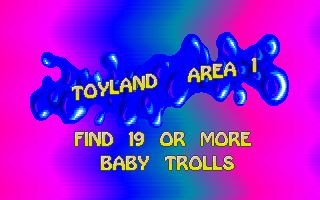 Trolls is a colorful and fun platform game created by Flair Software Ltd in 1992 featuring the lovable troll dolls. Troll dolls were originally created in 1959 and have known fame throughout the world at various points in history.

The game begins and we are greeted with the backstory of the game where as it get's close to 00:00 and everyone (a sleepy bear wearing a nightgown) is going to sleep. As soon as the clock strikes 12 our Troll awakens and starts his quest to find his lost missing troll babies.

You start the game in the hall of doors where you select the world you want to play in. Each world contains four levels and your goal is to rescue a finite number of baby trolls before you finish a level. Troll babies can be collected in any order and luckily there are extra babies scattered around so you can skip getting the tricky ones.

In a manner similar to Super Mario enemies can be disposed of by stomping them on the head. Instead of fireballs however, you can find scattered inside balloons yo-yos which can be used to destroy enemies without having to get too close to them. You can take 3 hits before you lose a life and have to restart the level, luckily with the babies you rescued still safe and sound. I'm mentioning this because as with a lot of platformers of that time, you die quite a lot. It's a good thing that you are armed with 5 lives and 5 continues to succeed in your quest.

It's fun and colorful, reminiscent of the graphics found in the Zool games with a catchy music to keep you company. Overall it's a nice fun little game to spend more than an afternoon with to remind yourself that the end purpose of the game is to have fun.

mariosevr:
Feel free to share anything about Trolls (1996) here!
[Reply] 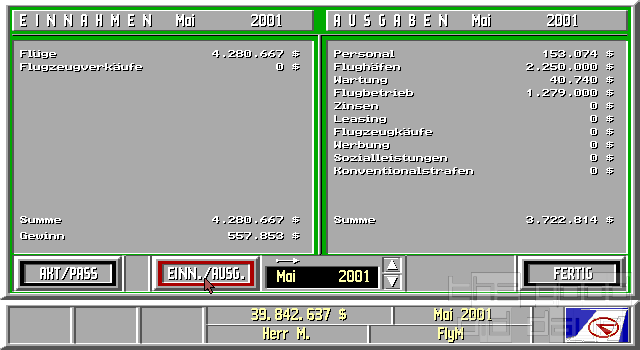