Rise Out from Dungeons
for MSX (MSX) 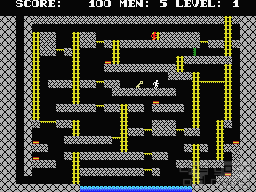 In just a few words: maze, running, shooting, little men, platforms, ladders, traps, goldbars, key, exit. But all these tags would hardly make a review, now would they? Yes, you're guessing right, this is another variation of the all-time legendary platformer Lode Runner, which funnily enough came out the same year, only this is apparently a very quick response to Broderbund from japanese ASCII. Although somewhat unaknowledged (unless you're lucky as me), it is still a nice and entertaining game with a slighty rehashed scheme.

Perhaps the reason behind little recognition is that this game was made for MSX exclusively, which typically defines the dimensions of popularity. Obviously, a case of poor promotion and distribution. Furthermore, I'm not entirely sure whether this was a response to LR or quite otherwise. Graphically speaking, this is almost the same as LR, only zoomed out a bit and with better palette. Like in LR here you rove in a number of differently arranged platform levels, climb ladders, collect gold bars, avoid & doublecross guards with the primary objective to bust out. But there are some additional novelties to the game's setting. The traditional requirement however is a working brain and careful fingers.

First off, here you don't have to collect all the gold pieces (or whatever those objects are) in order to get yourself out. It is enough to uncover a key which unlocks the doors in certain parts of the maze giving you access to the stairway leading up and out. Unless the pathway is already clear. Collecting all the pieces is mainly to gain points which may grant you an extra life in the long run, but it isn't imperative. Here you don't shoot the ground down, you shoot horizontally to dig your way through, trap red men or yourself for that matter. Like in LR there are shootable and unshootable ground layers. Shooting at your enemies is useless, they are invincible unless fooled into a trap. Additionally there are water pools which you must stay clear off, and absolutely no crossbars. Instead there are bridges which won't let you stick to them when falling from above and will make you pass right through, which often means bathing time. Dangerous.

There are 20 levels in total, your enemies are 2 maximum (quite a relief if you ask me) and 3 speed modes you can select from optionally. Each time you complete a level you receive a keyword for the following level, but I could never find any good use for it. If you complete the game once you receive 2 secret combos, one of which allows you to skip levels (missing link for the keywords?) and another increases the number of lives. Another good news is that there is no time limit. I hate time. Wait, have I mentioned it before?

Conclusion. This is a nice alternative to LR, which I personally dig a little more. But you must understand that as a person who never really played the original Lode Runner game and only has a general knowledge of it, I am simply unable to tell otherwise. However, objectively speaking, for a game which came out almost immediately after LR (which is only a theory at this point) it seems a little more sophisticated, albeit lacking some of the traditionally fun elements. So if there are any LR maniacs left out there who never stumbled on Rise Out from Dungeons I suggest they try their might in this game. It's worth a go or even two.

Moebius:
Feel free to share anything about Rise Out from Dungeons (1983) here!
[Reply] 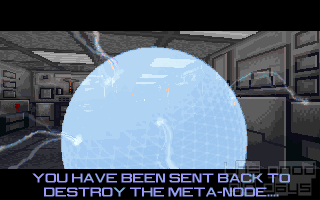