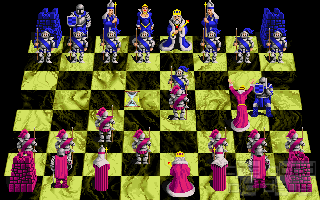 Behold the most unusual and exotic chess game yet, where all the pieces have been brought to life and are ready to re-enact in combat mode what has up till now lingered in your fancy only (if at all). In this game you enjoy not only the great many entangled schemes and clever tactics of capturing and checkmating your opponent as per established tradition, but also the great many ways of graphic violence and execution which is the house special here and possible only in a computer game. Hence Battle Chess.

As some of you may have guessed correctly, this game features chessmen in animated action. That, however, doesn't mean you can literally indulge in a mindless rampage on that poor ol' chessboard. No, the correct message is, you play the same ordinary chess only using anthropomorphic figures as literal personifications of the pieces with some special animated effects added. Plus really cool sampled sound effects originally played via internal speaker. Meanwhile, it may all have its own drawbacks as will be observed later in the review.

There are two versions of the game, EGA and VGA, but they were released separately in 1988 and 1989. The latter was additionally supplied with intro music and extra sound effects such as footsteps, which though considerably slowed down the gameplay. In 1991 Interplay released Battle Chess: Enhanced CD ROM for both DOS and Windows 3.x, which now differed dramatically from the former two. However, I believe all three could be very well covered in this one review since they all owe to one and the same principle.

On the bright side, here you have a 3D marble chessboard with real human looking figures arranged on it. Well, all except the rook, which is still a jack-in-the-box of sorts and not exactly what it seems. The black and white here are represented as red and blue. Each piece acts in conformity with existing rules, but has its own visual way of treating the adversary when capturing is performed – a short animation sequence is engaged whch can be funny, bizarre, brutal, but always spectacular regardless. Likewise, every chess piece can be slain in many ways depending on who the slayer is. Meaning, there are numerous combinations and plenty of good show ahead.

The downside of the above: you can't be seriously playing chess with all these knick-knacks and fooling around. While striving to attack your opponent and dying to find out exactly how it unfolds you tend to neglect the game itself, which, frankly, used to be my own experience. I'd use up every possible combination just to see who does what, and for that I would play using 2 human players lest anything would get in the way of precious discovery. After all secrets had been revealed I simply lost passion for the game. Turns out it's more fun watching it than playing.

The bottomline thus: if you really wanna play chess play normal chess game, cause this one seems to distract more than it contributes to genuine experience. Besides, when you discover all the fun stuff the thrill is lost and the former amusement becomes an utter vexation. Granted, the graphics and all the animated stunts are rather impressive, but the gaming model provided doesn't quite account for the very concept and philosophy of chessplaying. In that respect, Battle Chess is but a grotesque toy, and as such more fitting for children rather than adults.

Don't get me wrong though, I treasure this game as a bittersweet memory and a splendid work of art, but simply can't regard it as a serious game of chess. Incidentally, there is a simple and conventional 2D chessboard mode you can use instead, but that alone hardly makes Battle Chess special, leaving only a pretentious name with no kicks whatsoever. So, on a sidenote, why don't you play something mundane but more practical instead like, say, Chessmaster 2000?

Moebius:
Originally posted by Mr Creosote at 05:21 on March 14th, 2016:
Maybe to complement your point about the animations distracting from the core game rather than enhancing it, while probably sufficient for children and beginners, the AI's playing strength is rather bad.

Mr Creosote:
Maybe to complement your point about the animations distracting from the core game rather than enhancing it, while probably sufficient for children and beginners, the AI's playing strength is rather bad.
Moebius:
Test
[Reply] 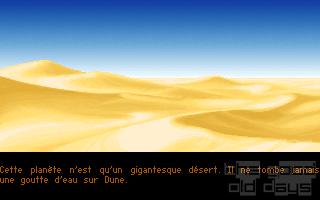