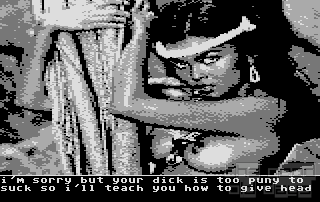 Ever since Eliza, artificial intelligences attempting to pass the Turing Test have predominantly belonged to the female species. It is, as everybody knows, a sign of a scientific approach. Girl Simulator discloses its non-biological nature in its name; nevertheless, it shall be treated according to the same scientific standards out of respect proper in academic circles.

“sally” [sic!] contains an optic factor, i.e. adds a visual representation of herself to the mix. This representation remains static in all states, but the grey-scaled digitization is on a good technical level, especially for the creation time. Stylistically, it is in line with the expectation based on said creation time, signified by the headband. Subjectively, it can be considered fairly appealing.

The performance goal is intuitively communicated by (the lack of) the conversation partner's attire. A satisfactory conclusion can be reached by convincing sally to engage in coitus. The artificial intelligence upholds the impression of an actual conversation extremely well by answering every user input but the three expected terms with a cunningly phrased “that sounds nice”.

Should the human interaction partner take too long before hitting the right buttons, sally will guide him (let's be honest…) towards the expected input by mentioning the correct term. This is quite subtle, because that term is embedded in a sentence, in turn part of a complex statement made of several sentences. The impression of conversing with a real woman is therefore striking!

In an unexpected turn of events, sally's personality does not fully follow the wish-fulfillment paradigm typically found in this genre. She considers her counterpart (assumed to be male) to be not adequately equipped and takes charge of the proceedings in the intermediate phase of the action by demanding compensation in the form of additional activity which is then promptly and automatically performed by the test subject's avatar. In this context, sally makes a factual mistake while lecturing. Undoubtedly, an intentional and praiseworthy design choice by the scientists designing this artificial intelligence to make it appear more lifelike.

This concludes the preliminary study. Final results will be appended once data of a sufficient number of test subjects becomes available.

Mr Creosote:
Agreed, this was very likely a stock photo being used.
Moebius:
Originally posted by Herr M. at 07:13 on March 21st, 2016:
Looking at that picture I just have to wonder: Do you think that woman still remembers that photo shoot? Did she even know that it was for such a… weird game? How would she feel about it today, if she took a look back? Where is she today? Questions upon questions.

Actually, i do ask myself these questions now and then. In this particular case something tells me she wasn't even aware of her taking part in the game. And hey, nice to see you again Herr M.

Well, maybe the game is so great that it is already bad again.

Looking at that picture I just have to wonder: Do you think that woman still remembers that photo shoot? Did she even know that it was for such a… weird game? How would she feel about it today, if she took a look back? Where is she today? Questions upon questions.

Moebius:
Let's just say, i didn't notice any explicitly negative remarks, such as some you used against poor ol' King's Quest

Mr Creosote:
Originally posted by Moebius at 06:24 on March 21st, 2016:
you never even mentioned any of its bad aspects in the review?

I don't?
Moebius:
Did you just forget to rate the game or you simply hate it beyond words since you never even mentioned any of its bad aspects in the review? 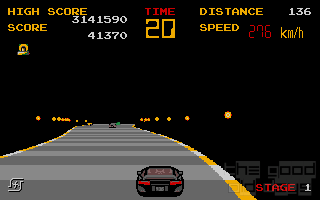