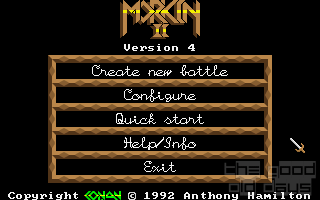 Shades of Archon (but without the arcade style duels)… up to five wizards battle it out on an empty field. Empty for now, because after a couple of turns, their summoned armies will start to occupy significant amounts of space, sharpening their weapons and howling their battle cries before buckets of blood will paint the earth red.

Morkin II is one of those games which derive some surprising tactical depth from simple rules. Each turn, every wizard can cast one spell. There are three categories of spells: summoning creatures to fight enemy wizards (and their creatures), magic missiles to attack directly and strengthening the wizard character (who can throw quite a punch) himself. Usually, a healthy mixture of the three will be most promising.

The catch is that the choice of spells is limited by the number of available spell points, and this is where the game comes up with an ingenious idea: those spell points are earned by… fighting! Doing damage to an enemy, you receive the equivalent amount of spell points usable from the next turn on.

The usual tactic in such a tactical wargame of more than two factions would be to sit and wait while the others throw their resources at one another and then, when they're all exhausted, waltz in and snatch an easy victory. By its rules, Morkin II rewards bold action! With one battle rarely taking longer than 10 minutes, it does not even matter that this concept of course rewards success so much that a winning side's power (army) grows exponentially, making it strictly speaking an unstable system.

Graphics are ultra-simplistic. This was to be expected from a game occupying less than 100kb on your hard disk. Not that it matters much, given how it scores in all other aspects, like intuitive controls and challenging AI. What's even more important, though, is really the realization that all of these (including the size) are secondary matters compared to another thing: the basic idea, which doesn't even need to be a complex one.

LostInSpace:
Personally I like simple games very much. This sort of games that doesn't come with a huge overload of sounds and graphics and still are a lot of fun. So practically I would never play Chaos Reborn. Instead this little gem here is the right amount of entertainment I'm looking for. So my question to Moebius: This project of the author you are talking about, is it still current?
Moebius:
No, he's pretty unprejudiced, and when i showed him this post he simply said "it's brilliant"

Actually, i've linked him this site before just to show some of my reviews. He's from the UK, so he's more than familiar with Spectrum as you may guess. And yes, i was worried myself that he might think it was me who advertised the game to you.

Mr Creosote:
Well, it's a pity that he probably won't believe that I chose the game without you nagging… though maybe it can be seen from my track record that I do have a weakness for small semi-amateur games with good ideas

Moebius:
Heh, wow... I personally know the creator of this game, known him for years in fact, and presently he's working on a new project. Didn't expect you to review that, and actually just recently i showed him this game stuck randomly in a huge torrent collection. Peculiar.
Mr Creosote:
Feel free to share anything about Morkin II (1992) here!
[Reply] 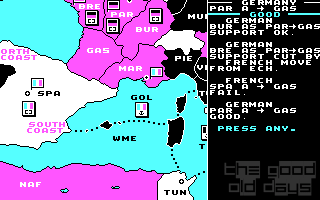