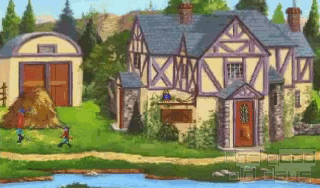 Don't you hate it when you come home from a leisurely walk to find your home has vanished without a trace? No, that hasn't happened to you? You're obviously not from a royal family with a tendency to anger evil wizards, then. That's exactly the scenario that King Graham of Daventry encounters in King's Quest V: Absence Makes the Heart Go Yonder, one of the most notable and memorable (if not for entirely the right reasons) Sierra games ever made.

The premise is straightforward. Mordack, a dark wizard with an unknown grudge against the royals of Daventry, whisks the castle and all its inhabitants away. King Graham, returning as a playable character for the first time since King's Quest II, returns to find his home and family missing. Fortunately, a talkative owl named Cedric just happened to witness the event, and escorts Graham to the far off land of Serenia to discuss the matter with Crispin, Cedric's employer and a very good (if scatterbrained) wizard. Armed with only his wits and a faulty magic wand, Graham sets off to confront Mordack and rescue his family, with Cedric by his side. Along the way, he'll discover the reason for Mordack's actions and encounter numerous friends and foes.

Like other entries in Sierra's flagship King's Quest series, number 5 was revolutionary at the time of its release. It was Sierra's first 256 color VGA game, though a downgraded 16 color EGA version was also released for those with older computers(there was even a NES port). It was also the first Sierra game to receive alternate language releases and a CD-ROM edition with digitized speech. Of course, being the first in so many areas, it did not succeed on every front. The voice acting, performed by members of the Sierra staff, sounds like it was recorded in an abandoned gymnasium on a Yak Bak and unfortunately cannot be switched off, as Sierra inexplicably removed the dialogue text from the CD resources. For this reason, I recommend the floppy disk release. This allows players to focus on the beauty of the artwork and MIDI musical score without sloppy, hissy speech marring the experience.

Gameplay is a compelling, if mixed, bag. The plot is intriguing and the high stakes of Graham's mission add an excitement and tension not present in all earlier entries. Serenia and its surrounding locations are incredibly well designed and diverse in style - there isn't a single location that isn't enjoyable to play and explore. Unfortunately, despite these perks, King's Quest V does commit many of the cardinal sins of point-and-click adventure gaming. Certain items necessary at the end of the game must be located early on and are very easy to miss. Dead-ends are plentiful and Graham can die quite unexpectedly - be careful when walking alongside cliffs and rivers, it's easy to take a swan dive! Many tasks also do not have obvious solutions and require some trial and error. It is rewarding when you've managed to figure things out, however, and newcomers can easily be forgiven for looking up a hint or two to help them on their way. The atmosphere makes up for much of the gameplay shortcomings, as the hand-painted backdrops are beautiful and set a high bar for the subsequent games of this type to follow. The musical score is equally enchanting, especially when played back on an MT-32.

The characters Graham encounters during his journey are colorful and memorable - though one in particular has gone down in infamy. Cedric the Owl has the ignominious distinction of being one of the most reviled characters in gaming history. Though the worthiness of this reaction may be arguable, it is not entirely without reason. He does nothing whatsoever to aid Graham on his quest, and instead spends his time stating the obvious, cowering in fright and getting himself into scrapes Graham must rescue him from. His negative reputation was undoubtedly exacerbated by his CD voice actor adopting a shrill falsetto that did not record well on Sierra's limited sound equipment. On diskette, with only text boxes to convey his dialogue, Cedric fares much better. True, he doesn't offer much in the way of help, but he doesn't grate on the nerves as much when mute. If Cedric was intended to serve as comedy relief, Sierra fell short, and they may have done well to write him lines that were actually funny. Fortunately, there are plenty of other rewarding characters and moments to counteract this, and Cedric ultimately doesn't drag the game down as much as some may claim.

Ultimately, King's Quest V is a worthy entry in the series. Not only did it advance the technology of adventure games, it's story did a great job at both building upon the world previously established and paving the way for the future, as the ending perfectly sets up the plot for King's Quest VI. It's incredibly frustrating in spots and not altogether straightforward, but the beauty of the world presented and the fun of exploration makes up for a lot. So throw on your adventurer's cap and give it a whirl, and keep a custard pie handy for close encounters.

Graham the King comes back in one of the best known Sierra's sagas. King's Quest V – Absence makes the heart go yonder was the very first game of the series to be released in languages other than English. This is something that sounds normal today, but back in the 90s was incredible news for graphic adventure fans all over the world. English was a real issue for me and my brothers as kids. “To drop”?? Oh my God, what do they mean? What do they want from me, to enjoy playing a game or are they trying to make me learn something??

With a much better interface and a different concept compared to the previous releases, where you have to write commands to interact with characters, places and objects, this “point and click” adventure makes you travel to an ancient world of mystery and magic. Your mission is to help Graham the King to rescue his family from Mordoc, the evil magician. You will have to follow the advice of a wise owl, get some food downtown to survive through a long desert walk, talk with the gypsies (even if you are not so welcome in their encampment), find the treasures hidden in the forest full of magic creatures, visit the icy mountains and, as usual in all these graphic adventures, look really close, pay attention to each detail and squeeze your brain to the max!! Honestly, this game is quite difficult to finish.

I've heard that all the game scenes were first drawn by fine artists and then, after scanning all their work, the images were adapted to show the beautiful aspect this game has. Also, as it's advertised on game's box, you can install the 256 colors VGA version only if you have almost 10MB of free space available on your computer!! I remember having to erase many games to have the best King's Quest V version installed on my PC, but really worth it!! 256 colors was THE FUTURE after playing Sinclair Spectrum not that long ago.

You will find good graphics, nice music, adventure and a lot of humor in one of the best graphic adventure games made in the early 90s. King's Quest V follows the tale created by Roberta Williams in 1984, and if you want to dive in a world of fantasy similar to Simon the Sorcerer or Discworld, I suggest you don't miss this game; you'll definitely enjoy it. 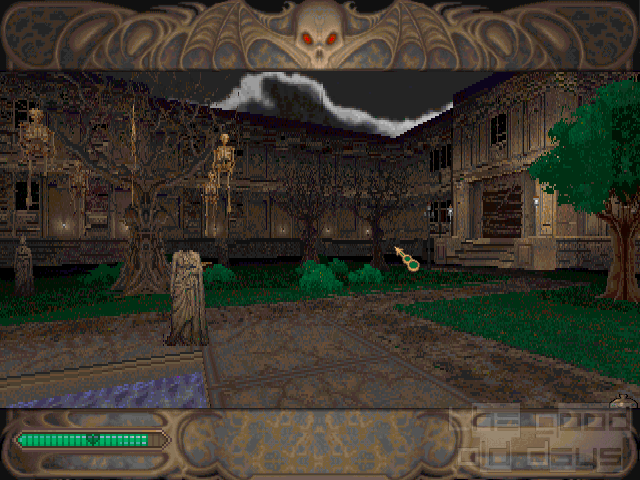