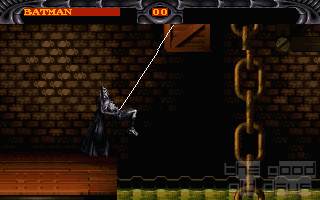 Gotham City. The decadent abode of violence, murderous crimes, mad supervillains and never-ending darkness and gloom. Ever occured to you that even the very name suggests a certain gothic connotation? Once again our DC hero in black cape and mask must save the day and this time his target is The Riddler along with his disfigured accomplice Two-Face, formerly a good friend of Bruce Wayne aka Batman, but now a sick nutjob with multiple personality disorder. Their henchmen are a good old bunch of cold-hearted goons, thugs and various trick-or-treaters gone loony. Well, Batman, that sounds like right up your alley!

The game is a cinematic action platformer and a beat 'em up based on the same-named movie. It was ported to PC, Sega Genesis and SNES, where this time, surprisingly, PC seems to slightly excel even the SNES version in both graphical and audio aspect. However, the playability is highly questionable, which I will be highlighting rigorously in this review and will touch upon it in due course. The game shares usual for Acclaim MK-like graphics and realism which includes photographic backgrounds, rotoscoped sprites, and even very similar combat system. It wouldn't surprise me if they used some of the same MK models for rotoscoping, since I'm already aware that those weren't the actors featured in the movie.

You can play as Batman, Robin or both using 2 players, which I never got a chance to enjoy. Wandering through various dark catacombs, corridors and buildings you fight enemies, jump and use grappling hook to move between platforms, and collect energy kits, big and small ones. There are also secret rooms and spots holding energy kits and extra lives. Occasionally you stumble on green question marks - Riddler's cryptic guidelines for modus operandi on each level, which is often some vague mumbo-jumbo while the tasks themselves are clear and self-evident. Each level is subdivided into sections, on each section you must overcome a certain number of enemies and/or perform some tasks to be admitted to another section and eventually another level.

The game focuses not much on puzzles, obstacles and mapping, but mostly fights which are like mini bouts inspired by 1x1 style fightings rather than classic beat 'em ups, which paradoxically makes this game a hybrid of three. Your enemies come as 2 maximum, but that alone can give you hard times as they often like to attack you from both front and rear. There is also a training mode where you can practice your combat skills, but that didn't help me much. I have to say, your enemies' behavior is too erratic and barely traceable, you simply have to get whacked now and then, and despite all efforts I failed to develop a reliable attack and defense system.

Ok, enough with the humble introduction, time for some generous scolding. Honestly folks, this game is a total failure, and the reason why: excruciating difficulty. At first it may appear very palatable, and as any Acclaim fan you are used to the fact that most of their games are made for humans. All but this one. For starters, lives here are ridiculously scarce and extra ones are also insufficient, let alone hidden. The energy kits often appear when they aren't neccessary, and when urgent you can spend eternity doing your best to survive and still lose a life just before you can finally restore your health. Outrageous. Meanwhile, your enemies get tougher and still more unpredictable, so what used to be a walk in the park will become a backbreaking toil and in the course of it you will die not once and see the implacable “Game Over” screen time and again.

The miscellaneous gadgets that you can select prior to game will do you little good as all of them are equally ineffective and evoked with great effort via various key combinations which only proves to be a great waste of time. In fact, your only real weapon here is bare knuckles. You CAN'T EVER save your progress, and believe me, this game is seriously asking for it. There are NO CONTINUES or anything that could motivate you to go on. Expect no mercy. Oh, and guess what, this game has several difficulty levels, and what I've just described above happens to be the EASIEST. Now, how does that grab ya, folks?

I don't know, maybe I'm just a little out of shape and used to handle this kind of games better as a kid, but today I can tell you candidly that this shit is barely even enjoyable. Traditional platform challenge here is evidently deprioritized in favor of fighting which pretty soon gets boring, dull and repetitive and constantly losing and starting the game anew takes it to a whole new level. I must confess now that I had to resort to a little cheat to complete the game, which thankfully does exist, otherwise be sure I would've never succeeded. At the initial title screen you must type in lullaby to activate cheat mode, which will allow you to choose any desired level ranging from 1 to 8 and specific section. And no, I didn't skip all the way to the final one, but proceded in compliance with my real progress, which to me is another way of using savegames and is only fair, I reckon.

Apropos, the name of the game could pass for one more conundrum from The Riddler implying that you can play (lose) this game forever, unless you are smart or lucky enough to cheat. Now that one would make perfect sense. 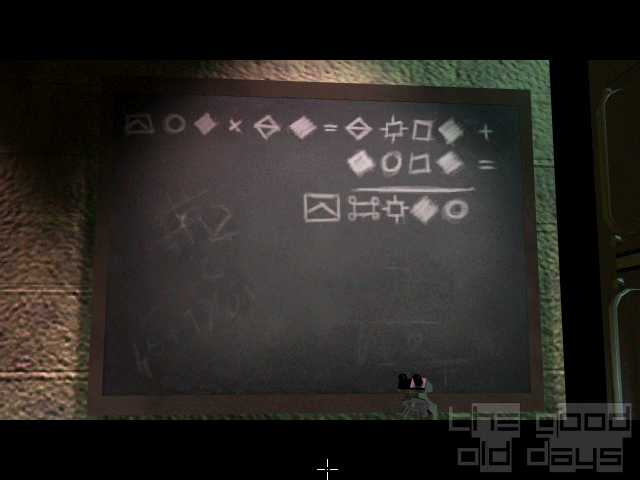