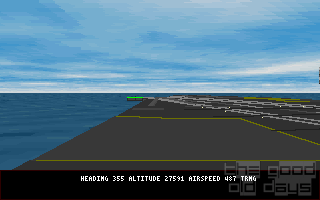 I now take you back to 1995. Me and my brother are absolute Formula One Grand Prix addicts. We develop this respect for Microprose games, as we witness so many awesome titles Microprose has released.

On a random day, we're on Continente which was a big retail company in Portugal, our native country, and we're checking the boxed games section. Suddenly something really calls my attention. I spot this beautiful box, with a picture of a sunset on the background and a darkened F-14 on the runway. On the bottom it says: Microprose Simulation.
I pick it up: “This must be awesome!!!” - I say to myself. “Hey look...” - I say to my older brother. He picks it up... “Oh its by Microprose... Yeah we'll get it”. The excitement comes...

I couldn't wait until we got it installed on our AMD 386DX-40. Sorry if you're bored already, but this is the story of how I got the DOS game that I spent more hours playing than any other DOS game in my life. Yes, Formula One Grand Prix comes to a close second.

And firstly let me get this off my chest. I often read on the internet that the F-14 is an interceptor and not a fighter. Sorry, but that's bullshit... This article right here will give you a very good insight, written by someone who has researched a lot and even got to talk to some F-14 pilots:

Knight Syndrome and the F-14 Tomcat

Let's now get into the game.

Fleet Defender is somewhat a follow-up to the otherwise very good F-15 Strike Eagle III. The graphics are real good. Fleet Defender used really good 3D models and then applied texture mapping. This resulted in really neat looking airplanes, with not only the F-14's looking very realistic but all the rest of US Navy aircrafts as well as opposing air forces.

Most of the campaigns take historical events as their history setting. For instance one of the campaigns in the medditeranean sea is Operation “El Dorado Canyon”. Never heard of it? Go on to wikipedia and read about it. OK, now imagine that Lybia was 100 times more aggresive during that event. That sets the tone for this campaign. There are 3 campaigns for every scenario making a total of 12.

There was no game like this that showed carrier operations so well detailed an realistic. You can see how busy it gets around the carrier, with numerous planes taking off to perform their various roles. Truly awesome for its day.

The F-14, in my opinion is a joy to fly. No, its not as agile as an F-16. But that doesn't mean its not manoeuvrable. Well flown you can take on any adversary. Most people think that the F-14 flies like a rock, maybe because most people just load 6 Phoenix missiles and that's it. No shit with all that weight it flies like a rock. But give it an F-15 type load (4 AIM-9's and 4 AIM-7's) and it can really fight.

The avionics are well modeled and the AWG-9 radar just takes the cake. I mean there's a whole section in the manual dedicated to operate the AWG-9. As soon as you learn it, like i did, the AWG-9 radar system was awesome for its day. You'll most of the time be using track while scan mode and put 6 Phoenixes on target. If you don't learn how to do it, you're just ignoring one of the F-14's best capabilities.

The enemy AI can be really good and challenging. They know how to employ their radars and fly their aircrafts to the best of their abilities. They can dogfight really well too so watch out!

The positives in this game overwhelm the bads by FAR. But some of the bads are a few bugs that were present in the first version of the game, like your friendly bombers being stuck on a waypoint and you would lose the mission. Most of these bugs were removed in version 2.0, which you will get when you install the scenario expansion or if you bought Fleet Defender Gold.

Sound is really good in this game, sound effects feel realistic. Music is pretty cool too, feels very military and the digitized speech is really cool too. You get speech for wingman, when talking to AWACS and carrier.

One thing that really bugs me in the game is how weird the guns work. It's really strange but its much easier to get a guns kill when you take a long distance shot than when i get the enemy really close and filling my cockpit. I put my pipper on that target and no matter if my tracers are ripping right through the 3d model but the guy just keeps flying like all the bullets missed. I don't know if Microprose fucked up the hit point geometry or something or this is some bug, but its really weird and frustrating. Sometimes you work so hard to get a beautiful guns kill, get the guy filling up your cockpit like at 200 yards out, you spray all your bullets right through him and nothing happens. I get 99% of my gun kills with a 10 round burst at maximum distance. One thing that seems to be random is burst mode. Sometimes in the mission the gun only fires 1 round every time you press the trigger, other times it fires 3 rounds. I also had occasions where it fires 5 rounds but the normal is 10 rounds. I never found a key combination that allows to changed the burst rate. Very weird.

This is still an amazing game. Some of the missions can be very challenging and difficult, you sometimes face hordes of enemy fighters, and some missions feel very rewarding when you complete them successfully. It's great.

Oh, and landing? Yeah about as real as it gets landing on a carrier on a game. If you use your instrumentation you can definitely land, but it takes practice. A LOT of practice. And most of the times your landings will hardly get maximum LSO rating. My best average during a campaign is around 2.5.

There's so much Ш could write about this game. So much more. This is one of the classic Flight Simulators of the DOS era, so if you like flight simulators you cannot miss this one.

Agathosdaimon:
nice review - one of the great flight sims from Microprose, i think they really improved on their AI with this one too, as i felt like the AI in some of hte older sims like F117A didnt really do too much to avoid being shot down - and perhaps that wasnt really the main emphasis of that game, but fligth defender, wow - i was just playing this with a thrilling 1 on 1 dogfight with a Mig 29 and it was on a knife edge with trying to get a better turn on it - it took a while but finally i did and success, but not without some damage.
Moebius:
Quote:
It's really easy to find a boxed copy of F29 Retaliator for the Amiga but not for the IBM PC and Compatibles / DOS.

That is true. We still lack those disk images.

I had the idea F29 Retaliator was a bit more arcadey than other simulators that came from Microprose or Spectrum Holobyte.
It seems to have been a really popular title for the Amiga, a machine i never had contact with, despite me being European and all, my first machine was a Timex 2048 computer (Portuguese made ZX Spectrum clone with several enhancements).
It's really easy to find a boxed copy of F29 Retaliator for the Amiga but not for the IBM PC and Compatibles / DOS.

Moebius:
Originally posted by carlostex at 23:21 on May 21st, 2016:
Never played it! However i'm looking for a boxed copy so i do have all intentions to try it out!

It was my very first PC flightsim, and back then (i think year 1994 or 1995) i was very much impressed with it

Its chief advantage is high responsiveness, unprecedented for a flightsim.

carlostex:
Never played it! However i'm looking for a boxed copy so i do have all intentions to try it out!
Moebius:
Very nice and detailed one. By the way, what do you think of F29 Retaliator?
[Reply] 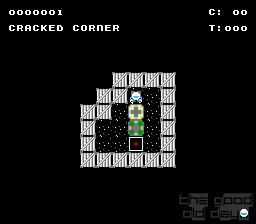