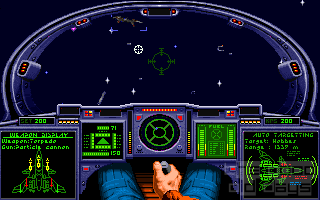 I thoroughly enjoyed Wing Commander and II (WC, WCII), with all of their add-on mission packs. Flying an armed ship around in space blowing up enemy Kilrathi “furball” ships (not that politically correct…) and hearing the digitized voice of them screaming was an absolute rush! WCII followed the tremendous popularity of Wing Commander, and Origin released add-ons for WCII in 1991 and 1992. However, I think Origin wanted to milk WCII and re-used the engine and made Wing Commander Academy.

If you have ever played Wing Commander, you’ll know how much fun and frustration there is to the game. There’s no reward greater than limping back to base after a 6-nav point run with 20+ enemy kills that have left your ship battered with no armor, one-gun working and your wingman dead. Seeing the cut screen of your ship flying back to base hearing the pop and crackles spewing out into empty space from your damaged ship, and knowing you're ALMOST home to be greeted with praises made you feel warm all over. You also know the horrific joystick-breaking frustration when RIGHT before you land you bump into the carrier and die because you didn’t ask for permission to land. Wing Commander Academy is full of the later feeling of absolute frustration.

You can setup what ship to fly, who to fly against, who your wingman and what each navigation point, or level, is like. For example at nav point 1 you can have your base, then nav point 2 asteriods and enemies, and nav point 3 more enemies, then nav point 4 your base again or more enemies. Other than a Gauntlet mode where wave after wave of enemies comes along and seeing how high of a score you can gain through that mode, that's about the extent of the gameplay of Wing Commander Academy. There’s no mission briefing, no backstory, no rewards other than a score. Sure, the familiar sounds and nostalgic screams of the Kilrathi are there. You can fly nine different ships, one being a Kilrathi Jrathek. You can also set the difficulty of the game. But that’s where the game ends in features. It really should have been released as an add-on to help people hone their fighting skills in Wing Commander II, not as a stand-alone game.

And that's it. Very short review for an even shorter (short-sighted!) game. In my opinion Origin made a lot of fans upset by releasing this poorly-planned game. There is no substance to it beyond it being a training simulator. If you’re feeling nostalgic and have played WC and WCII to death, I’d suggest skipping this and going to Privateer before installing Wing Commander Academy. 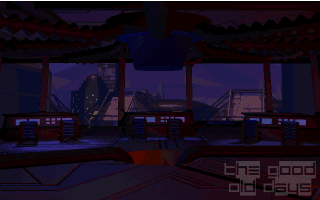