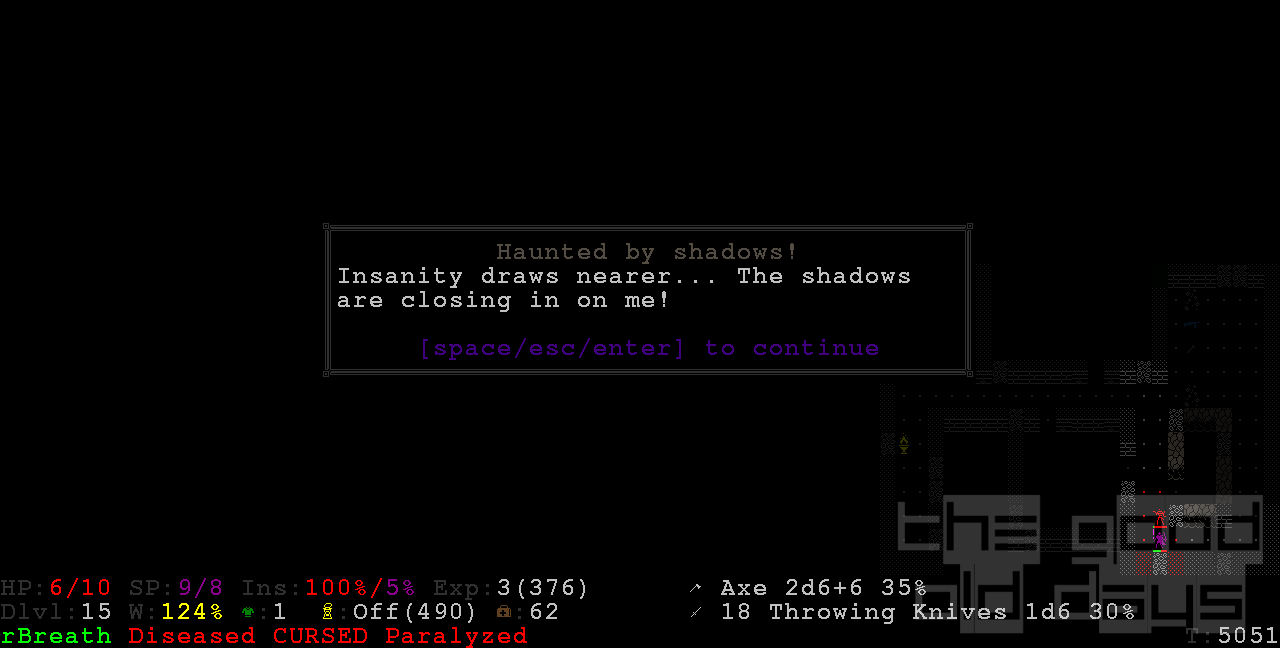 New England in the early 20th century. The legendary Cult of Starry Wisdom, fabled for their secretive behaviour and their great wealth, has been struck by an inexplicable tragedy. Their temple has fallen in disrepair, their members have either died, disappeared or scattered. The perfect opportunity for a treasure hunter like you to enter their once impenetrable sanctum to loot and pillage.

Infra Arcana presents itself as a classic Roguelike game: the player immediately dives into a dungeon of randomly generated levels, killing all kinds of monsters, breaking chests open to re-equip and taking breaks in shadowy corners to patch up his battered body. It is really a hack'n'slash game without any shred of plot development between the initial introduction and the ending text; no characters will be willing to interact peacefully.

In a refreshing departure from the usual D&D-like themes, the game takes its cues from the horror genre. H.P. Lovecraft in particular is cited as a source of inspiration. Creatures from other franchises make (random, of course) appearances as well â€“ sometimes in a comical way to lighten the general mood. 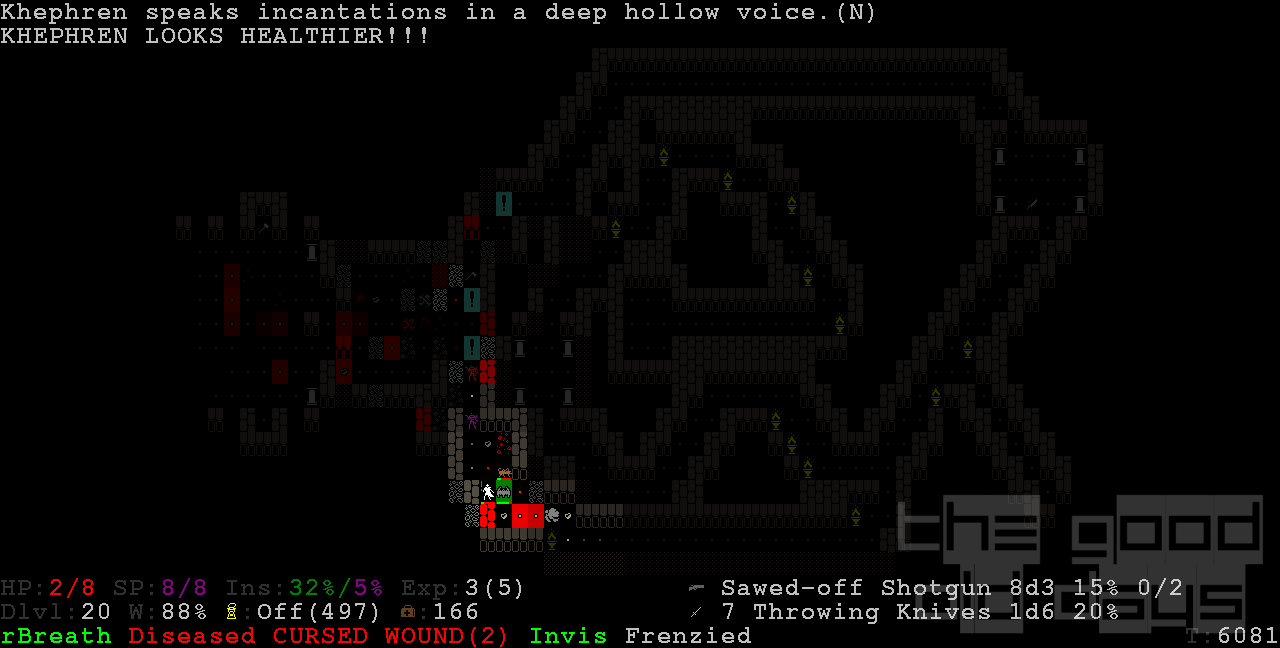 The thing about taking Lovecraft motifs into other media than the original written word is always that his works live off vivid descriptions of the unimaginable. Often, he would describe physically impossible shapes or even just fall back and explicitly call something “indescribable”. How to translate this into a visual medium?

Infra Arcana's graphics do a fabulous job in this respect. Everything is drawn in a sort of silhouette style, still leaving most of the details to the player's imagination. The stark black and white surroundings only coloured with the shiny red blood shed in battle make for the appropriate atmosphere for such a game.

Many such games are all about finding the +1 sword, using it to kill more monsters, subsequently upgrading to +2 and then, you suddenly find the snazzy +5 battle axe to slice through everything standing in your way! Wow! Infra Arcana only has few weapon classes with little variation.

Similarly, the character development is rather limited. As the player gains experience, his muscles won't bulge more and more; explicit character stats and their progression have actually been removed from the feature set by now. The only remaining targeted progression is the selection of one new trait from a list per experience level. These include things like stealth, increased attack accuracy or a stronger spirit.

Now, you may think, with such limitations, is this even worth playing? Actually, it is all part of a design strategy. Instead of making a game all about items, it has become a game of tactical gameplay.

Survival clearly depends on picking one's fights. Avoidance is often a sound strategy and if you really need to push through that room full of horrors, approaching them in the right way is a must. Waltzing in with your machete drawn may work on level 2, but later, you have to think hard whether to shoot your way through (with limited ammunition) or throw a stick of dynamite first, or rather use just a smoke grenade to save the real explosives for even later.

Another balancing act lies in the madness mechanic. The longer the player stumbles around on a level, the more his “shock” rating increases. Encounters with specific monsters or objects can also give it a negative boost. If it maxes out, the player's insanity increases, often accompanied by negative effects. For example, you could develop a fear of confined spaces, which, of course, is rather inconvenient in a dungeon crawl. 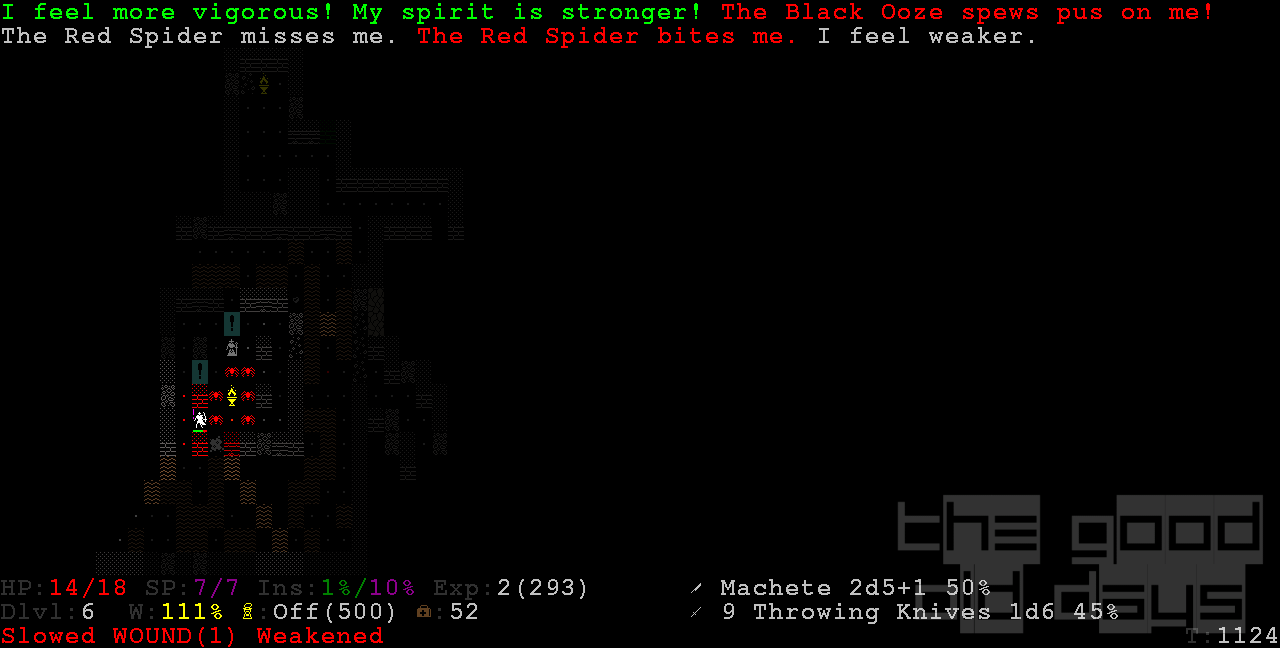 Speaking of fears, another major tactical element is concerned with character states. The player can become terrified, infected, poisoned, plainly exhausted from too much fighting etc. â€“ but also gain resistences, extra luck and other positive traits. Using them to your advantage or taking them into account correctly (if negative) is yet another balancing act.

Many of those things described can be influenced with potions and incantations read from scrolls (or, in the case of the Occultist character class, from memory). Of course, as usual in the genre, these have to be tried out blindly to identify their nature firstâ€¦

On the downside, Infra Arcana is a very hard game. In fact, it is too hard for its own good in many places, crossing the border to unfair occasionally. Fortunately, it is not an overly long game. With basically 30 levels not covering too much space and no way to ever backtrack (there are no upwards stairs; this determinism of being forced to push on downwards no matter what actually increases urgency quite a bit), at least losing a character is maybe not too bad.

Second, the graphics are just too damn dark! Outside the currently visible area (which is highlighted), it is hardly possible to make out anything, although the character should really remember those places.

Of course, a fairly simplistic game with almost no actual role-playing elements will not rise to highest addiction levels. It is its strong focus on its core elements which are almost perfectly balanced to always provide a challenge to any player, no matter how experienced, which makes it such a fascinating playing experience. Definitely recommended! 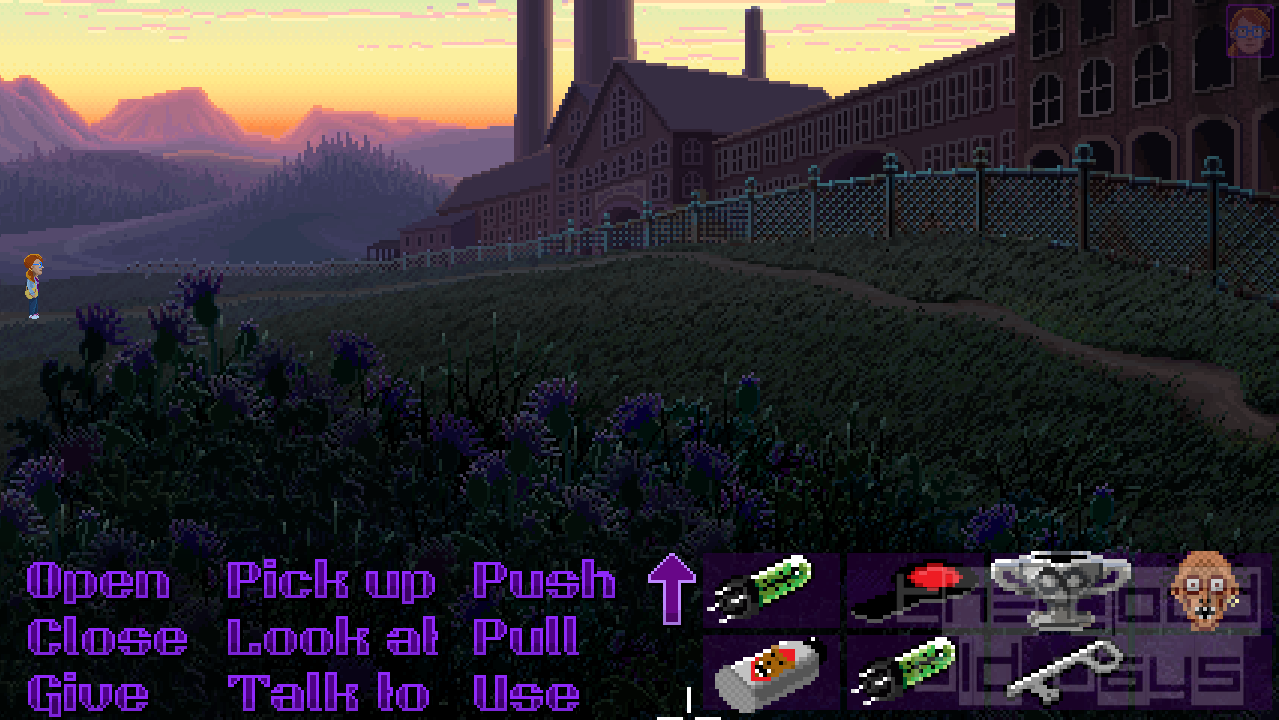