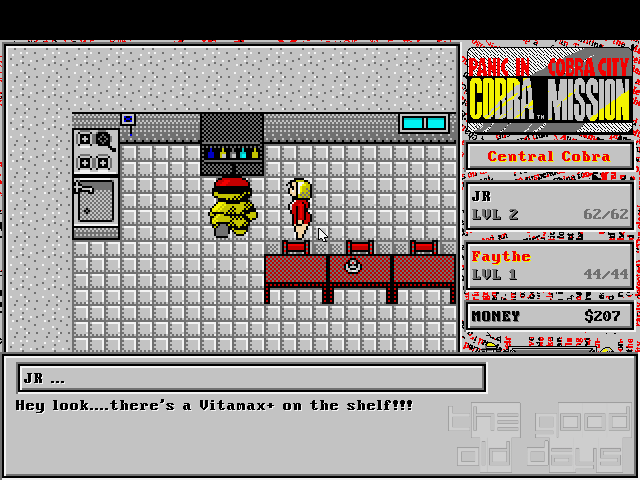 Private eye + Playboy = Private dick? Indeed, in this game you can be an excellent detective as well as incorrigible womanizer. At last your title is justified! But shhh... you don't know about it just yet. What you do know is that Cobra City has been shaken by a series of alarming events. People are dissappearing, streets gangs are running loose, police are disbanded and it's time that you investigate what's causing disturbance. Together with your charming female partner you will disentangle one case after another until eventually you pick up the trail of a mysterious criminal overlord known as Kaiser.

The game is a point'n'click anime-styled 3rd person adventure & RPG (jRPG) hybrid, where adventure element is dominant and RPG is just a flavor without real substance. Apart from being a blend of Adventure and RPG this is also an exclusive combination of a seemingly harmless detective story and a series of promiscuous sex exploits amplified with vulgar language, which is quite unexpected as there is not even a slight allusion to it in the intro and is like a secret compartment here. Makes you think it was meant to be a surprise, though the legit owners of the game probably knew what they bought coming from the box stickers alone. The advantage of being a pirate! This is also the first eroge game ever released in english, and is a remake of PC-98 japanese port.

The game perspective is top-down with some 3D elements and flat side-view characters - typical for most classic jRPGs. You control both the P.I. character and your female companion. They are a "party", but there are no split jobs (except in combat), though the idea may seem compelling. The city map is divided into Central, West, South and East Cobra, each of which is captured by one of Kaiser's high-ranking proteges and has to be cleared in order to gain access to another. Each sector as well as entire city is really a maze consisting of trees, houses and other blocky elements. Though not very sophisticated it still takes time to discover all ins and outs of it.

You start in Central Cobra and begin your mission by taking a part-time job as a delivery boy which is inescapable, though you may get a different idea. It helps you get money, explore the map (using a real map) and retrieve valuable information which will eventually set you on the right track. Some houses you can enter to deliver goods and/or talk to their occupants. There are some shops here and there where you can buy or sell stuff such as weapons (a variety of cold steel mostly), clothes, medicine and.. sex toys? Yes, your typical everyday private investigator's tools. Occasionaly you have to visit bars in order to get some information from local folks. There are also some traps which are pretty easy to discern, cause they all sound too good to be true. If you're unsure you can always save & restore, which is one feature this game doesn't lack.

You can also search for various dropped items out in the street (bushes, fountains, etc) or in people's houses (carpets, beds, drawers, corners etc). So don't be surprised if you ever find a poisonous dart under the carpet in some kid's room. Also, don't haste to buy anything, cause you might just as well find it by checking around. Sometimes you can find female underwear which can be later exchanged for photos of naked girls (you need to find the right guy first), so search well, you damn sick pervert you!

Now and then you are attacked by gangs, thugs and some freaky maniacs, which don't appear on the map and pop out of nowhere. You can either accept the challenge or escape. Battles occur in a 1st person mode where you have to take good aiming and hit your enemy with whatever handy accessories: steel pipes, daggers, baseball bats (even empty revolvers) or bare knuckles. Though it may seem crucial where you hit your opponent, limbs, torso or head, I didn't notice any difference. What really matters here is the fluxing powerup in the top right panel, which if at full delivers maximum damage. Gun is the only thing that ignores the power charge and is effective at all times, but it's harder to come by. When defeated your enemies can drop some money, weapons or medicine.

Fighting increases your combat skill and stamina. You take turns at your enemies together with your partner, which is the only time when your jobs really split, only it doesn't make your experience more RPG-like. Besides, when you build up enough skill & stamina it will hardly even matter, cause soon enough you will whack your enemies with just 2-3 blows while sustaining little to no damage at all. Furthermore, when not in a fight your stamina restores by itself (when walking) and the only time you may need medicine is when you're in a fight and you can't escape. Believe it or not, I almost never used it, and would walk around with pockets full of Vitamax drug and never lay a finger on it.

Now, what really ticked me off is that your enemies appear too fast and there is always exactly the same time interval between encounters (about 10 seconds of non-stop walking), which seems like another inferior RPG element here. Though, it doesn't make the game difficult, on the contrary it helps you get sturdy faster, but it still is annoying. This is the only thing I don't really like about the game.

Now for the long-awaited "house special". In-between your conquests you receive phone numbers from the hot chicks you save and can sometimes travel back to Central Cobra to your partner's house and give each one of them a call (strangely, the only place where you can use a phone). Next you meet the girl and the challenge is to get her in the right mood for sex which also occurs in 1st person semi-narrative mode, only here you apply your mouth, hands and various corresponding devices (uh-huh! So that's what I need the vibrator for!) to pass through several phases of excitement with gradual denudation, each showing semi-animated image of a girl in different positions until you finally... well, you know.

If you fail to excite the girl - don't worry, you can always call her back and try again. Besides, this isn't really a legit part of the game and you can always skip it, but... you don't really wanna skip it, do you? There are also a couple of hookers here, which can be found in bars. You can do the same thing with them with only one bit of a difference: you don't have to get them excited (damn right I don't, I pay for that shit!), and all you have to do is just read the spicy narrative-like dialogs and enjoy the show.

The game is not difficult, on the contrary it's a little too easy and if sufficiently dedicated you can finish it in a few hours. The script is extremely linear, though, and you can only progress step by step, no knight moves. There are some spelling mistakes in the dialogues, which is a typical issue with english localizations of Asia-originated products, though this company is supposed to be based in US. The game uses explicit vocabulary, there are plenty of cynical jokes, sarcasm and of course, obscene material for certain naughty individuals.

If you like double genre games like this then it's a sure shot for you. It's pretty unique, and quite frankly, this is the kinkiest game product I've ever played. Do not be fooled by its comely exterior, cause Leisure Suit Larry is a big joke compared to this. In other words, imagine if Larry was really successful...