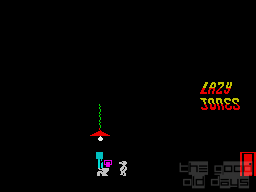 The last thing is the only real challenge here, cause it's the only legitimate way for you to die. Here you have three storeys with six rooms on each and an elevator in the middle. You can move between floors, enter rooms, play video games (some of which are mini-versions of famous classics a-la Space Invaders, Breakout, Frogger etc), while avoiding collision with two other people on top and bottom floors and something looking like maid's cart on the middle one. If necessary you jump over them. Wish you could've done the same with your parents back in the days, eh?

Ok, starting with nonsensical part. Playing games per se doesn't really get you anywhere. You can't really finish them, and you don't have to, in fact. All you really need to do is just check in, wait till your time runs out and split. Getting points? Not really, cause as soon as you reach 1000 the score resets back to 0. Even the score is fake! Question: what's the goddamn point then? Well, I'm guessing this is how the game authors repay you for leaping over other dudes and maid's cart - silly game parodies with no real end. How incredibly exciting! Oh, sometimes you have to sleep in some of those rooms, clean up or take a leak. Thanks, that makes it so much better.

Much as I'm reluctant to go into details, I still have to give a quick overview of the "games", since they may seem central here, yet of no particular value. Some are based on precision, some on reaction. Some are easy to "finish" and give you infinite lives, while others leave you almost no chance (like Frogger impersonator for instance) and if you die once - Game Over, which is what also happens when you run out of time. But who cares, that shit never ends anyway and the only felicitation you can get is from your friend who just happens to hang around and is either drunk or high.

The actual or outer game, if you will, is a joke too. After you've been in the last room the game restarts and is now sped up in the outer section. Typical early 80s. It's always about more enemies, obstacles, or accelerated speed on level-up. Like many game products of that time period, this one too looks like a bad joke or someone's crazy experiment. You can see it not as one game, but an actual pack. Granted, for 1984 it was pretty cheeky indeed, especially when you had no more than 48K RAM, but can it really impress anyone today? Hardly.

One last thing. Before you play Lazy Jones check around and think for a moment: are you sure no one's playing YOU?